I have a Windows XP Home Edition guest and a Linux Mint 13 host. I use VirtualBox and the ~/Public directory is shared with the guest. It sometimes happens that I use IE on the guest system to download files (until I get a better Windows browser).

All of the downloaded files go the the L:\ drive (the ~/Public directory). When they are finished downloading, Windows Explorer adds a :Zone.Identifier file for each file I download. When I extract a downloaded ZIP archive on the guest (on drive L:\), Windows creates a :Zone.Identifier file for every file in the extracted directory. This even occurs if I use the host to move a file to the ~/Public directory.

The shared ~/Public directory is on an ext4 partition and the colon character is supposed to be illegal in file names in Windows, but not on the ext4 partition. Is there any way to stop Windows from putting all this rubbish on my filesystem? (I might have to create a shell script to clean up after Windows' act.)

Here is what I see in Windows Explorer: 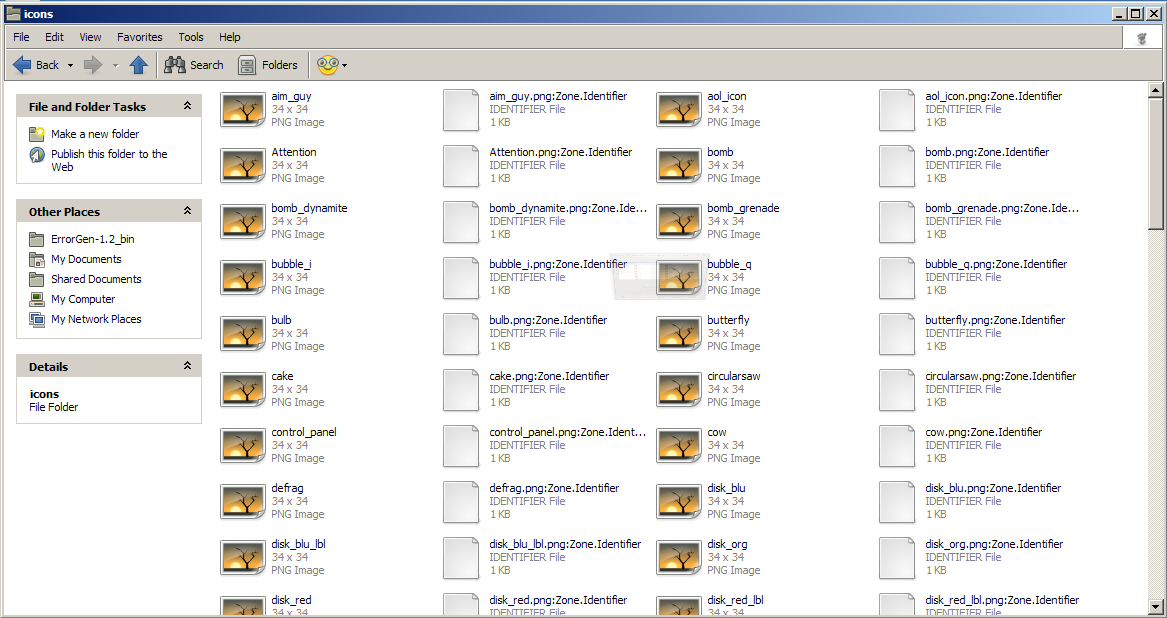 By the way, if I were running a Mac OS X host (where colons are illegal file name characters) this would be even more horrendous.

I bet these are used to track where the file came from (for windows to pop up the "are you sure you want to open this" dialog when you try to open a downloaded .zip or .exe).

My memory isn't 100% on this, but if I recall correctly the : is forbidden in Windows filenames because it's used for alternate streams on a file. You have the main data stream which holds the actual content, but each file can have named alternate streams which hold metadata: C:\File\Path\Filename.exe:AlternateStreamName

If the underlying filesystem is EXT4, then I suspect IE/WE is trying to write to such a file and expecting it to be an alternate stream, whereas the filesystem driver for the L:\ drive is just creating it as a regular file.

(By the way, : is not forbidden on NTFS, just the Win32 API that Windows explorer and most applications use (because they repurpose it for alternate streams). NTFS supports any character in a filename except NUL (\0000) or slash (/), and HFS Plus (Mac OS X) supports any character except for NUL (but this might be further restricted by the tools or OS depending on it's needs))

Ansgar Wiechers provided the answer in the comments below:

Creation of ZoneIdentifier streams can be disabled by setting the policy Do not preserve zone information in file attachments to enabled. The policy is located under User Configuration\Administrative Templates\Windows Components\Attachment Manager.

For crippled Windows versions creating a DWORD registry value SaveZoneInformation with value 1 in [HKCU\Software\Microsoft\Windows\CurrentVersion\Policies\Attachments] should have the same effect.

Not the answer you're looking for? Browse other questions tagged windows linux windows-xp virtual-machine shared-folders or ask your own question.

0
Accessing clearcase view drive from virtual machine is slow
4
How to open files with colons in their names in Windows?
2
Virtual Boxes, Linux hosts, Windows guests, Shared folders and Recycle bins
0
Shared folder on uBuntu VM
1
How do I access local web address in a microsoft virtual machine?
0
Shortcut file opens location, but directly visiting location fails
4
Mount a guest directory on host (sharing folders in virtualbox, just the “other way round”)
10
Can a virtual machine (VM) ever overwrite the host disk, or a host a guest disk, or a guest another guest disk?