How can I constantly monitor my computer's RAM usage?

I have to monitor my computer physical memory (RAM) usage constantly when I'm working, because sometimes I will work with multiple applications (e.g Sublime Text, Photoshop, MS Visual Studio and Chrome with 10+ tabs open) - and I want to know what's the current RAM usage so I won't push it too far. 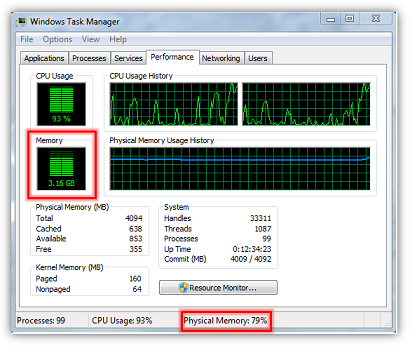 However it's not convenient. Sometimes I will open 5 new tabs in Chrome and forget to monitor my RAM because the Windows Task Manager is minimized - only to find that something is going to crash because I'm using too much RAM, followed by my PC shutting down Chrome to free some memory.

What I want is to constantly view and monitor my computer's RAM usage in all of my application, including my browser.

There are multiple software written for such a solution. Just a few after a quick google search:

And one that is quite light weight (but doesn't support any Windows version newer than XP):

Either way there are scores of these programmed for all kinds of specifics. So go ahead and choose any one of them. Also I don't think it would be a bad idea to go ahead and upgrade your RAM, 4GB is quite little.

You can use any number of dock/bar/gadget/widget type of tools and programs. Some stay on top, some cut out their own chunk of the screen, some are transparent, some are pegged to the desktop, most are configurable.

something is going to crash because I'm using too much RAM

What you mean by "crashing"? Normally if there's too much RAM usage the system start to "swap" from the RAM to the Pagefile.sys and not "crashing"... This swapping may slow down the performances but nothing else.

1) The Virtual Memory: RAM + Pagefile.sys can be increased by adding RAM or increasing the pagefile.sys...

2) The unused Memory is a lost Memory If you run many applications at the time they can't run faster when there's more unused memory...

3) The main bottleneck in performances don't comes from the lack of Memory but from the percentage of CPU / GPU usage. What you have to check is the peak usage of memory, the % of actual usage and the total CPU time.

BTW: check the CPU usage in your screen capture: 93% !

Now to check in "real time" the Memory usage I suggest you to use MS TechNet Sysinternals Process Explorer and set the columns to see the total CPU usage, the total GPU usage and the CPU time. Set the systray icons to see the graphics of the CPU history, GPU history and Physical Memory history as you want. 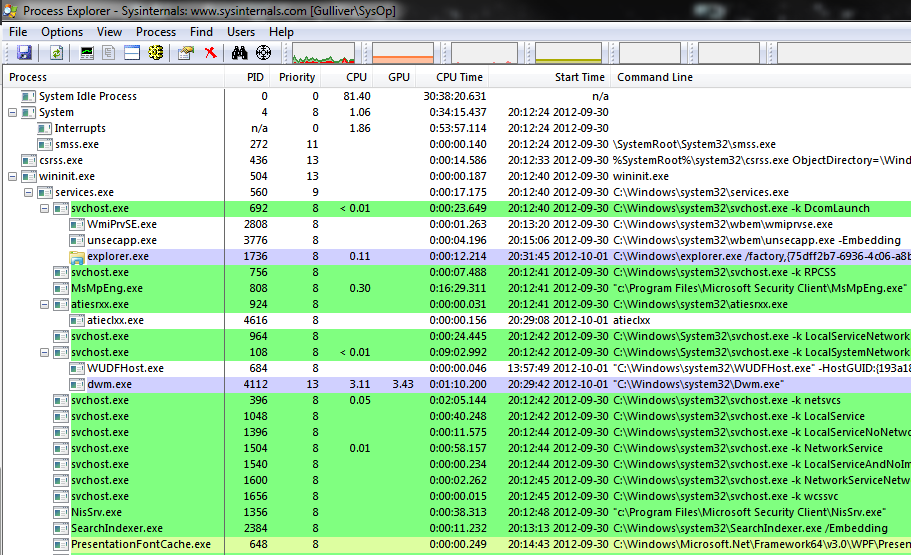 Try Viorb Monitor! The software will show CPU, RAM usage and Internet download and Upload speed as well. And details about this software you would found in the description section of the link.

Many of the above tools require Aero to run in the taskbar. If you have your computer set for best performance in the System > Advanced Settings > Performance tab, those won't show any graphic in the taskbar. Aero is a memory pig (as is windows 7).

Here is a great, lightweight (<1MB) memory monitoring tool that runs a % or MB meter in the system tray that provides configurable notifications and even memory defrag and will show the top memory offending processes upon right clicking on the systray icon:

UPDATE 11/2017: I've been using MSI afterburner for over a year now and don't need anything MSI related or Aero. You can set multiple meters in the system tray for CPU, RAM, GPU, Temp, etc:

I just found rainmeter on Lifehacker which seems to be very nice.

Not the answer you're looking for? Browse other questions tagged monitoring memory-usage or ask your own question.

0
How to solve lsass.exe very high ram usage?
1
How can I constantly monitor if my server has network traffic?
4
Do programs on Inactive Virtual Desktop still use the memory in Windows 10?
1
Why is my RAM usage so high with nothing running?
1
Monitor cpu usage per process