How do I remove automatically added keyboard layouts?

I have a Spanish keyboard on my notebook, but I use it mostly for English and Chinese writing.

This is how I configured the languages:

However, Windows added some layouts on its own (probably when connecting via Remote Desktop to computers with different languages/layouts): 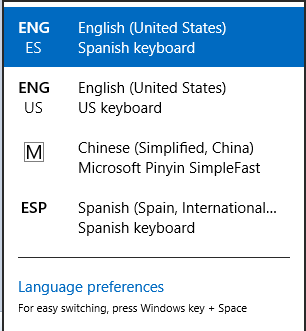 Those layouts are all part of the AltShift cycle, which is extremely annoying.

How can I remove ENG/US and ESP, considering they don't show in the configuration list?

Is there a way to prevent them from being added again?

Add the offending languages under language in control panel, then delete them and they will be gone from the notification area.

The keyboard layout (in Windows 7 at least) is contained in the registry key HKEY_USERS\.DEFAULT\Keyboard Layout\Preload.

Preload determines which keyboard layouts are present in the keyboard switch button (on the bottom right of the taskbar), and the number determines the ordering. The REG_SZ item "1" contains the first layout, "2" the second, etc.

The article Windows Keyboard Layout lists most keyboards ids. You would also find your above layout ids defined as sub-keys of the registry key :
HKEY_LOCAL_MACHINE\System\CurrentControlSet\Control\keyboard layouts.

It would be interesting to know what your registry contains at these locations.

For me, currently (2018) there is no solution. There's a bug since windows 7 that Microsoft is not handling, by which a default keyboard is added, usually English US, English International or in my case English UK, and cannot be removed. But here are the options you have and can try, with various versions of Windows 10, which did work for others. Hopefully, your case is different from mine.

You can get to the languages settings panel in the following ways:

Now there are several possibilities:

Regedit and remove the keyboard not needed from: Computer\HKEY_USERS.DEFAULT\Keyboard Layout\Preload

Someone wrote that choosing the Administrative tab on the "Regions settings" window (you can re-open it from the Region & Language settings by clicking on the "Administrative language settings" on the right under "Related settings") and then Copy settings, set both checkboxes to checked and ok. But I don't see how this can help. It didn't for me.

If like me it didn't help, I was able however to change the ORDER of languages so that the first language was mine (Hebrew) the second the desired second keyboard (English US) and the third - the undesired one (English UK) so that when changing via the keyboard (Windows + space, or left-Alt + left-Shift) going from Heb to English I reach the desired kb, and going from English to Hebrew I see it didn't change so give it another extra change to reach it. (This helps me with the missing indication due to having ENG written for both the US and UK keyboards. I opened a separate bug for this on the Microsoft discussions website)

I also found some info about changing the keyboard "system permissions" which I will not repeat because it may be the cause for these solutions to not work.

One more addition to the accepted answer. If you want to remove the keyboard that was automatically added, which you can't see at the settings.

You have to add it manually and then remove it, then it disappears from the selection. The issue is that it may reappear sometime in the future.

On Windows 10, you can remove keyboard inputs / layouts here:

If you have multiple display languages installed (let's say "English" & "German", then you need to check your keyboard inputs for each language). 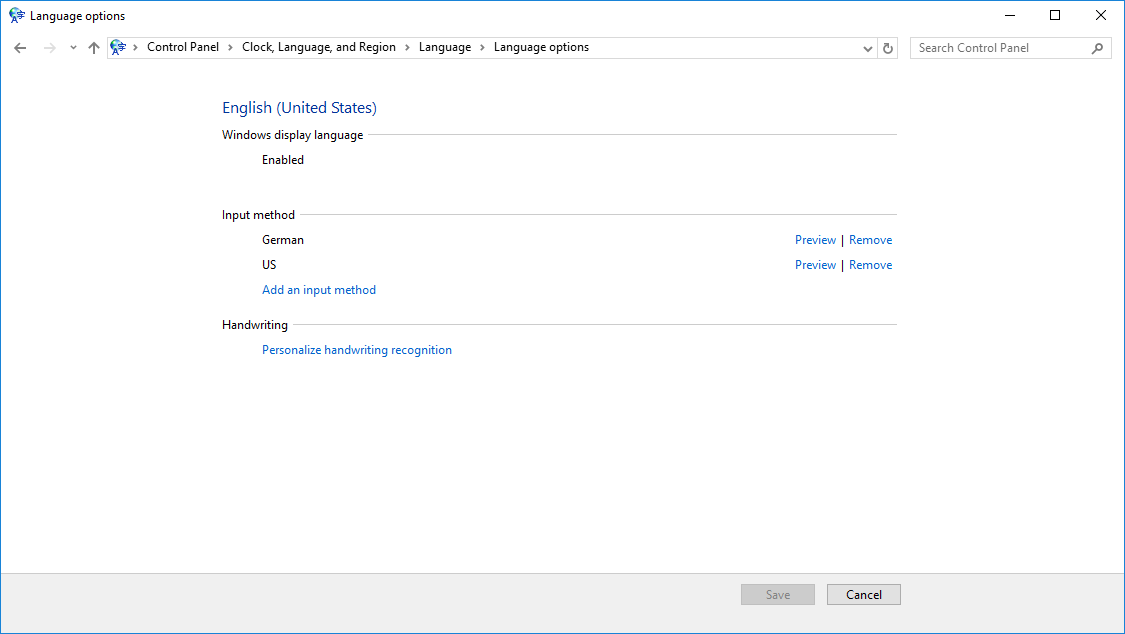 91
How do I remove English (US) from Windows 8.1?
1
How do I remove an input language that appears after restart and doesn't show up in settings?
204
How to prevent Windows 10 from automatically adding keyboard layouts (i.e. US keyboard)
2
window 10 'invisible' language
1
Why after removal keyboard, it reappears after some time (Windows 10)