Almost a month ago I bought Intel 330 128GB solid state drive, migrated my data with Intel branded limited-feature Acronis from old HDD to new SSD, optimized with Intel Toolbox and started using it. Occassionally I get close to 1 minute freezes while seeing operating system "beach balls" and animations still work, I can interact and click on something but nothing responds, nothing loads. Recently a couple of such freezes occurred in shorter amount of time in a row. I have noticed that if I stop interacting with laptop, the freeze lasts less time than if I was interacting with laptop.

But the bigger problem is when freeze just does not end and computer keeps being stuck unlil it is more than half hour and I run out of patience to keep waiting and feeling I need to restart the system because I am not getting anywhere. Such freeze happened while laptop was cold booting into Windows 7. This is when freeze hang occurred and I had to restart, only later to be greeted with Windows recovery screen stating something about faiure of boot sector and asking to insert Windows repair CD. But after I restarted, Windows booted successfully and all was well.

I have filmed video of freeze hang occurring in cold boot which you can see here (on video page look below for description):

As I have mentioned in the beginning, the SSD is less than a month old but here is S.M.A.R.T statistics just in case (TRIM is enabled btw according to CrystalDiskInfo): 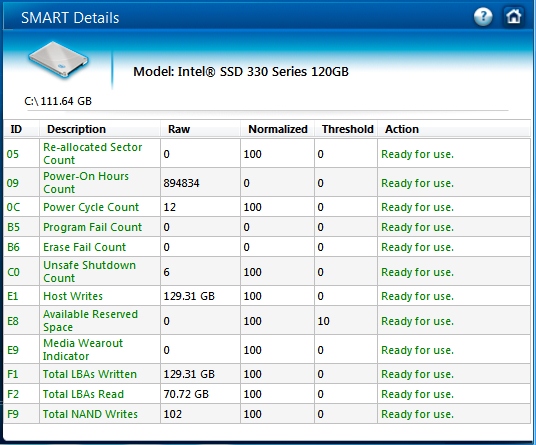 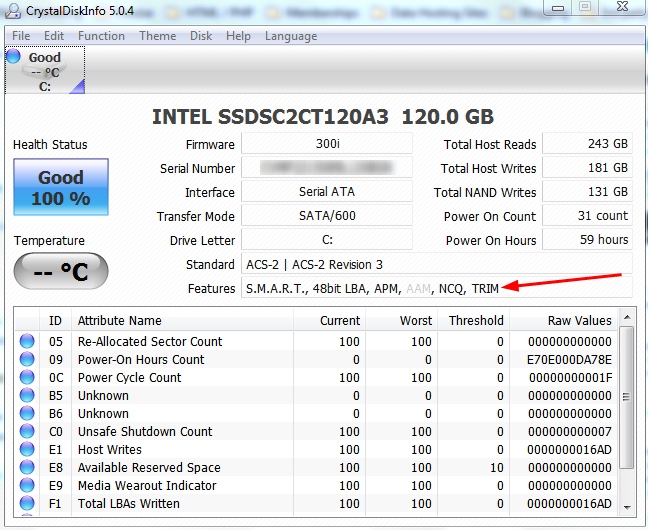 I want to emphasize that this SSD is the only drive I have, yet it is working in RAID mode (it was enabled initially in BIOS by previous laptop's owner) on Intel Rapid Storage drivers. I am contemplating about switching to AHCI mode but want to be sure this won't cause data loss. Additionally, the stock firmware is the only firmware available currently, yet Intel does not respond to my posts in their community board.

If anyone here has this SSD model or generally has experience with SSD drives, I would love to know your thoughts.

This could have to do with power management, trying to disable the SSD from time to time to spare some power which is probably not the best idea if it doesn't work out the way it should. I think this is because this was an improper installation (you cloned the data instead of reinstalling) and hence some setting is not set properly for your SSD, it could be that this is configurable in the power options but here's a more generic approach that has shown to work across various SSDs (mostly Crucial / OCZ) and even worked for the Intel 330 series in two foreign topics.

Save this as a .reg file and execute it, then reboot so the driver loads it. Make sure you run the latest RST / AHCI drivers for these settings to be applied, and that you don't run the default MS drivers for that. Make also sure that any other drivers for your system are up-to-date...

When you are unsure, feel free to back-up HKEY_LOCAL_MACHINE\SYSTEM\CurrentControlSet\services\iaStor\Parameters first.

Reported fixed on other Intel SSDs:

It is not trivial - OS won't boot after the change. Check out this question: Change from IDE to AHCI after installing Windows 8

Not the answer you're looking for? Browse other questions tagged ssd raid freeze storage intel-rst or ask your own question.

38
Change from IDE to AHCI after installing Windows 8
5
Clarification On Write-Caching Policy, Its Underlying Options And How It Applies To Hard Drives And Solid-State Drives

1
Is it more likely that a system freeze is due to hardware than software
2
Intel SRT / RST gives “no boot device” error after two reboots
1
Replaced optical drive with SSD in caddy, but BIOS freezes (Acer Aspire 5740-5847)
0
Many programs do not respond for a while after memory and SSD upgrade
1
New SSD hdparm shows “frozen” - whether secure erase is needed before installing Linux
1
Intel Rapid Storage Technology made HDD dissapear
7
Linux UI frequently freezes for <1 second
0
Solid State Drive Reformatting Limit