Im using a Lenovo ThinkPad T420 with Windows 7 64-bit and my integrated webcam is not working. Skype settings always show an error (see below). I tried to install this driver but it didn't work.

Here is the screenshot of that 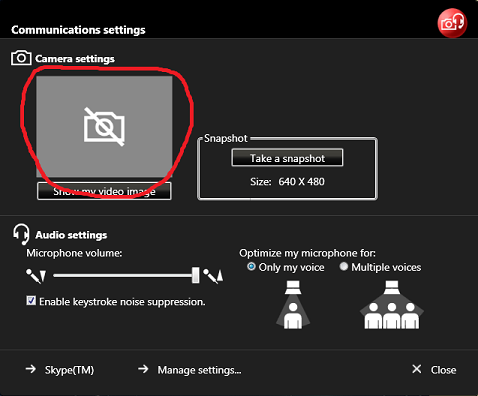 It means something wrong with my the integrated camera. But any solution? Or suggestion that might help?

had the same issue with the same configuration - t420, win 64bit, had the lenovo-suggested driver installed (and re-reinstalled) and camera wasn't working, with same behavior as described in your issue and picture.
for my case, an addition to the behavior described is: when i had the communication settings screen open (i.e. where the camera should appear but didn't), the camera's green Led was lit, suggesting it's started.

searched about it quite a bit, and finally now i did something simple - uninstalled camera from the device manager . refreshed the device manager and automatically the camera got reinstalled under the default Win driver. Ta Daaaaaa... camera's working now.
i guess it's not the top performance/quality that the manufacturer's driver should've offered, but... at least it works.

i don't know to what extent this trivial solution works on your case, nor if you tried it already, but hope it helps.
now i'm still curious what happens if i reinstall the lenovo camera driver. i'll try that too.

I now it's rather late to post any answers here, but I just had the same problem and the solution is actually much less cumbersome than all the answers so far. The camera is in privacy mode (obviously it likes to change that by itself) and you can turn it back to normal by just clicking "show my video image" in the settings page visible on the screenshot posted in the question.

You get to this settings page by opening Lenovo - Web Conferencing.

Check your Lenovo settings menu, go to camera settings, and make sure you are set to normal instead of private.

The integrated camera does NOT appear to be supported in Windows 8. Look at the driver page for the Lenovo T420. You will notice that there are Windows 8 drivers for many devices. Under the camera and card reader section, Windows 7 (32-bit, 64-bit), Vista (32-bit, 64-bit), and XP are listed. Windows 8 is not.

You can try to install the Windows 7 driver, but barring that working, you are probably out of luck.

Lenovo makes a few tools that may work. Check out Lenovo's Driver grabber and the System Update Tool.

I had a problem with identical symptoms.

Turns out I was too strict in removing app camera permissions, and removed access to the LenovoUtility app.

Unfortunately, the LenovoUtility app is responsible for handling the "cut camera" Fn key, and removing its webcam access prevents it from controlling the privacy mode, making it impossible to disable privacy mode.

Giving back camera permissions to LenovoUtility fixed the bug.

Check that you have installed and are running CyberLink YouCam or software similar to that. If it is already running, exit it and try again.

Just find 'settings' on your pc's Win 7 main screen (which shows all of your applications), change the status of 'Camera' from 'private' to 'normal' - and say hello to your own smiling face! I fixed my own camera in this way.

It may have nothing to do with your operating system. Do we really think Win 7 is so lame that it is incompatible to a camera? :)

You can get this to work by Selecting Show my video image option in the Lenovo - Web Conferencing utility.

I did not need to reinstall/remove any driver. It goes back to privacy mode by itself and Rather I accepted that because there's an option to keep the Web Conferencing utility in the system tray for easy access anytime (see image below). 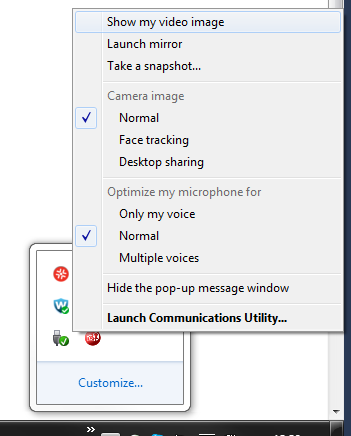 I think Privacy Mode is a useful feature but introducing such a thing without an introduction is a very bad idea.

It is still ironic though that we need such a feature to keep a Webcam inactive after deactivating it on the UI. A lot of people would agree that this is a much needed feature to stay away from hackers.

yes. also with me this simptom in a brand new lenovo T450 - and as simple as it was the solution - only change the status of the camera from "private" to "normal" - in the camera setting , that sould be in the capture video program that you use - skype/debut/atc.

Not the answer you're looking for? Browse other questions tagged windows-7 webcam thinkpad or ask your own question.