I'm wondering if it's possible to apply a customised highlighting scheme to linux terminal output, outside of the application that's generating the output. (Therefore, piping the output to some kind of colouriser would not do, because it wouldn't work for interactive output.) Ideally, you could apply some kind of regexp to each line, and a colour would be applied to each line that matches. (assuming the facility is switched on)

So, does anyone know of a terminal that offers this feature? The absolute best possibility would be something screen-like, that sits between the terminal and the shell, and processes the output without getting in anything's way.

You can use this feature in zsh using zsh-syntax-highlighting. 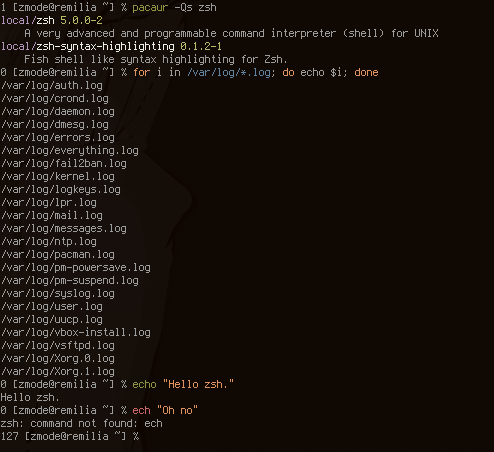 FISH also does this, but I have not tried it myself. (Site seems to be a little broken for now)

Not the answer you're looking for? Browse other questions tagged linux colors terminal highlighting or ask your own question.

2
Where can I find bash_profile / bashrc themes?