Windows lowers volume because of “communication”

Randomly, or at system sound (usb connect for example) Windows 8 lowers the volume of all other sources. (Same problem can exist on windows 7, just look online).

This is happening because of the "communication detection" made to detect phone calls and then lower volume. But in my case it happens all the time without reason as if windows always considers myself in a call. 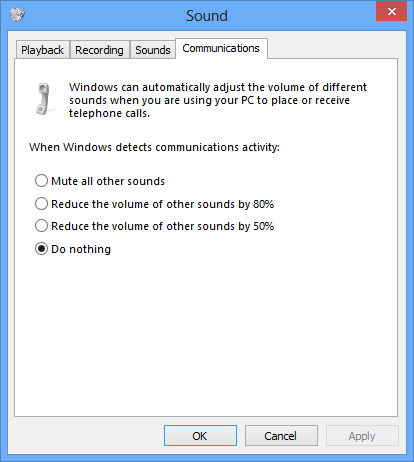 Do any of you have the same problem? is this a driver issue or a windows issue? I know this has been posted many times but they usually just tell you to turn off the setting above. I'm looking for an explanation or a solution :).

Thanks for your feedback and ideas.

If you are playing a multiplayer game (or anything else that sends/receives audio between two computers), it is possible that sometimes windows will detect this as communication. The game is communicating between two PC's sending/receiving audio (and a bunch of other data, but that's irrelevant here), so it makes sense that this can potentially be incorrectly interpreted.

also, I've had this problem before, and I was only able to narrow the potential causes down to a random unexplainable fit that windows (well, all technology eventually experiences this) will go through once in a while since nothing fixed it (except eventual reboot)

So two possible causes are communication with another device being incorrectly interpreted as a call; and random fit (or even just a bug, whether with windows, drivers, another application, etc)

I saw this problem when playing music and when I receive an instant message.

I believe the driver lowers the volume to prevent sound distortion. Volume lowering does not happen always, it mostly depends on the music I play. Although I do not have the exact data, I feel that the issue always occurs when I listen to certain music files.

To test this idea, you can lower the volume of the sound player in the mixer, and then make Windows to play another sound. If the overall volume is not changed, we've found the reason.
Lowering the master volume can also do the trick.

An updated driver was released after a while and now it seems to be working well. Sorry for those without new drivers but there might not be a solution.

Not the answer you're looking for? Browse other questions tagged windows audio windows-8 mute or ask your own question.