I'm dealing with an HP Deskjet F380 All-in-One printer. It's connected via USB to a desktop running Windows 7 Enterprise x64.

However I went into Printers and Devices under the Windows start menu, into printer properties, and print a test page, the test page would print out successfully.

I played with the way the computer handles printer spooling. Under the printer properties, under the "Advanced" tab, I had the print job print directly to the printer. In all these instances, the same behavior continues. I've restarted the printer spooling service. I've also gone under C:\Windows\System32\spool\PRINTERS and deleted files that were sitting in the folder. I have ran SFC /scannnow and the system found no errors in the system's integrity. I had the computer and printer make a cold reboot individually.

The only lead I really have going for me is that since the printer prints on other PCs, I can only assume that there is something wrong with the way the PC is configured.

windows-7 windows printer
Share
Improve this question
edited May 11 '16 at 11:43

I had a similar issue just last week, labels being printed just vanished form the print list, and then nothing, printer itself is working, calibrated etc.

And i found out that, i had 2 configured ports for one Label printer (I re-craetedthe view, with some mspaint magic :P) This issue was on more than 5 desktops, so something to do with a Win7 Enteprise x64 image that we use ... but... onwards

Solution : if you see this issue, delete the local port (how?), by changing the printers default port to LPT1-3, click Apply, then choose USB00* Local Port ( click once ), and then press DELETE should remove the secondary un-needed port.

Press Apply again, just to be safe, Reboot PC, check again, if the problems does not persist, and try printing :) 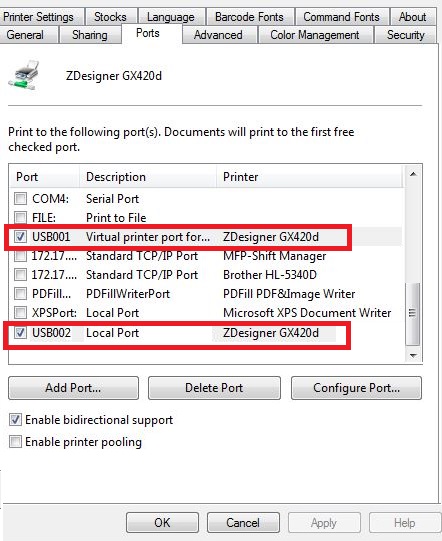 You might try using a diffrent print driver such as a PCL 6, PCL 5, or a PostScript print driver to see if you get the same results. HP should have several diffrent drivers if you go to this link(http://www8.hp.com/us/en/support-drivers.html) and type in the model of the printer.

Printers do sometimes get stuck in funny modes, where nothing seems to fix it. With issues like that I would try a full reset on the printer. On the F380, that's done as follows:

(information from this link)

The fact that it does print the test page only, reminds me of a problem I've faced before. However, it should not be this way normally. Go to Device and Printers and right-click the printer driver, choose printer properties, under security tab, make sure your user (and Yes specifically your user account, not for example Everyone, or Administrators, if you're a member) has all the permissions checked as Allow (i.e Print, Manage Documents, Manage Printer). If it's not there, add your user account and allow full control.

I hope it helps.

I had similar issue that took me weeks to figure out. In my environment we have equitrac for Xerox card swipe and printer auditing. Our issue was where user would print from any pc to an HP or Xerox and the job would appear to leave the print server successfully and then vanish to produce nothing.

We determined the user's account was locked in the Equitrac software so if you run something like that in your environment, check those variables as well.

Not the answer you're looking for? Browse other questions tagged windows-7 windows printer or ask your own question.