Solution for storing sata drives outside of case

I have a system that has 8 sata disks in a software raid 5 array using mdadm. My issue is that I want to move the drives from inside of the computer case in order to cool more efficiently. I have looked all over the web and only seem to find enclosures that hide the drives connectors behind an estata port or some other internal raid controller.

Basically what I want is an enclosure or equivalent that I can run independent sata cables to and either power as well, or have it have its own power supply.

I have the sata ports on the motherboard available and don't want to limit io by using one port with a multiplier or the like.

One final caveat, I am a college student on a budget and don't have a fortune to spend on such an enclosure.

Thanks in advance for your help and advice.

The problem with using independent SATA cables is that their official maximum length is limited to 1 meter. You may get away with longer cables, but a reputable firm selling hardware is not likely to ignore this. eSATA has slightly higher voltages and a maximum cable length of 2 meters. And a port multiplier also solves this.

All of this is not what you want to hear, but it explains why there is not much on the market which meets your goal.

This leave you with three options:

Since you write that you are on a budget I start with the cheapest one:

Basically add a regular desktop tower right next to you main desktop. Pass all cables.

A third party device such as the one Zac B refers to.

These will be very hard to find for the reasons I opened the post with. Basically you will have to place such a unit very close to the desktop. Which might explain why even the linked example is OEM only.

This is the best one I could find. It is only 4 drives, so you would need two of them. 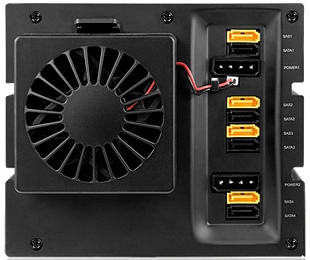 You mentioned one of them: Bandwidth. 8 modern drives can fill the a SATA-2 (3GB/sec / approx 270MB/sec) channel. SATA-III is faster. 8 drives will have to transfer up to 67MB/sec each before they fill a single SATA-III channel. That is doable in sequential reads, but in praxis I single SATA-III channel should suffice as long as you do not add more drives. Thus if you can afford a cheap SATA-III card then this is not a problem.

It also needs to be one which behaves well in case of a failure, otherwise a single failing drive is likely to lock up the entire array. This is something which I do not trust SATA width. SAS would be quite different, but beyond your typical college students budget.

RAID: An internal RAID card makes sense since it limits the cables. But once again, a decent RAID is probably beyond your typical college students budget. Especially since mdadm does quite a good job and a cheap RAID card might do a worse job.

eSATA: 2 meter cable lenght would make this a lot easier. Assuming 30cm for internal cabling on both sides, SATA just leaves you 40 cm between cases. Not much. eSATA would increase that to 1.4 meters. However 5 SATA to proper eSATA convertors (not just physical adaptors, but proper ones which also up the voltage) probably meets the same problem again: Beyond your typical college students budget.

I'd suggest using two of these (it's the only one I've found that doesn't port-multiply). I don't think they make one that holds more than five drives, but two would fit the bill and give you scalability. They're not dirt-cheap, but they're more affordable than a server-grade backplane or similar.

They take Molex power connectors, which you could either run from your computer chassis (annoying, might involve purchasing another power supply and/or splicing more length into existing cables, compromising reliability), or, more preferably, using AC-to-molex adapters (like these) for the drives. That's a lot of power bricks, though, and might be too expensive for you. Instead, if you can find a cheap (old, used, or low wattage is fine; drives don't draw much power compared with a CPU or GPU) power supply, you could mod it to run without being plugged into a motherboard. With that, two of the external enclosures mentioned above, and a little duct tape, you'd have an external one-to-one SATA enclosure for up to ten drives.

Now, because it's SuperUser, I'm'a tell you why your goal is probably flawed:

I'm not sure that you're going to get much performance advantage from the one-to-one nature of this setup. A good, dedicated RAID HBA with a couple of small SSDs to use for caching (or better yet, a cheap computer for use as a NAS running Nexenta or similar, with some SSDs as cache) will probably give you much better performance than using an mdadm based software RAID setup. Dedicated, optimized hardware really pays off in this area, and, if you're willing to rebuild your RAID, you could probably get much better performance for a lot less money than the solution I previously suggested.

Here's a suggestion that's a little out of the box:

If your cables (SATA and power) are long enough, put all the drives in a plastic box packed with freezer gel bags. Use a liquid cooling system like power gamers use to cool motherboards/CPUs to actively cool the contents. Maybe find an electric campers coolerbox.

My reasoning is as follows: Moving air is not as efficient a cooling agent as good contact with a thermal gel. The gel packs in contact with the drives will be better heat conductors, able to conduct the heat from the drives, and the cooling system is an active coolant.

Ideally, the best solution would be to immerse the drives in a cooled non-conducting liquid, but you would need some way of preventing the liquid from entering the drive vents. Plastic bag? Maybe.

I have a big tower of my own, and I hate fans, so my HDDs are in selfbuild isolated casing inside my case, watercooled by a quite small pump on 12V @ 2W.

HDDs don't get that warm, the copper-plates for cooling are quite cheap on ebay, at least they were a few month ago. My pump costed me ~50€ (new) including a small reservoir and connectors.

I would recommend you a big DIY or used reservoir and/or radiator.

Indepentend power you could get from an 1HE PSU, which you could build inside or outside of your tower.

The biggest advantage of this solution would be the SATA-Cables, which would not have to get longer than they are. And I might say noise too - because, I can't hear that pump, when it is at around 7V and it is still quite silent @12.

Don't fear the water, living with it for over 9 years now.

Not the answer you're looking for? Browse other questions tagged hard-drive sata mdadm or ask your own question.

4
SATA drives or chipset throwing DRDY ERR and ICRC ABRT
1
RAID-capable 3.5" SATA Drives
14
Connecting Internal SATA HDD to eSATA
0
How to connect an old sata disk to an external e-sata port without opening the case?
1
Where do SATA drives get their power when using a PCI SATA controller on oler PCs?
0
How can i manage10 SATA drives separately with same speed as DAS
0
SATA port multiplier: Drives not recognized
0
How do I set up a raid configuration in a separate case from my computer?