I'm experiencing a newly arrived problem lately that frustrates me a lot. The computer I bought is a Clevo 150ERM. Two of my friends bought the same machine, and are experiencing the same issue.

The computer came with Windows 7. There, I had no issues. Then, when we all switched to Windows 8, they had the mouse problem and I didn't.

That is until after 4 or 5 months when I decided to install the RTM driver of my Intel graphics chip, and the latest Nvidia driver. I also installed the latest version of Skype that just released (Skype 6 and Skype for Metro).

This basically leads me to conclude that the issue is not hardware-prone, and is not based on the operating system itself, rather the drivers or components that follow with it.

Description of the issue

The issue itself (lag with the mouse) happens whenever the cursor icon changes. For instance, if I keep hovering from and to a textfield (and the cursor changes into a caret and then back to a mouse), it stops for 200 milliseconds while it changes the icon.

An example is if I follow the mouse in the pattern shown by the arrows below. When crossing the window border, the cursor changes into a "resize window" cursor for a short while, making the cursor lag. 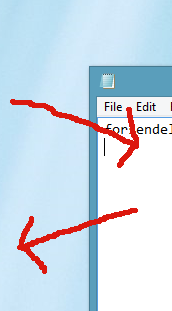 This doesn't sound like much, but it happens every time the cursor changes (even if it's to just move the mouse somewhere else, and accidentally make it cross a window border from where the resize cursor shows etc).

What do you suggest I try?

Check which drivers you need on this page. I suggest simply grabbing the "previously released" drivers.

Edit
I also suggest FIRST trying to update to the newest drivers at the time of reading this, THEN downgrading. By the time of anyone reading this, they may have already fixed it. If so, please post a comment to this answer, and I will update it.

Edit 2
I have found out, that, after a few reboots, the lag randomly appeared again, and contacted Intel support. They weren't of very much help, as I quote: "Please be aware that we provide generic drivers that have not been developed or tested specially for your system.". I personally read this as "Intel obviously has 0 to do with the drivers not working, it's definitely the manufacturer of your laptop..."

I will keep at this, until I find a solution. Meanwhile, I just installed the new 9.17.10.2875 driver, and the issue seems to persist.

Update
According to an Intel official over at the Intel forum topic, the issue has been resolved, and will be included in the next update.

Remember to revert the Group Policy rule of installing Intel drivers, as described in this post, for anyone who applied it in the first place, otherwise it simply won't install.

Update 2
It seems like Intel has fixed the issue!

For some reason, my driver did NOT automatically update through Windows Update though, a manual installation may be required. Download the version appropriate for your CPU here.

If you still have this issue: Control Panel > Mouse > PointerOptions >> Uncheck 'Hide pointer while typing'

Fixed it for me and I'm using Windows 8 with multiple screens.

I had the same problem with a Samsung Chronos, AMD Radeon HD 6750M + Intel HD Graphics 3000, only with a secondary monitor.

As a first try, I'd suggest rolling the graphics drivers back, if you can. Failing that you could try getting the latest drivers from the manufacturers sites specifically, maybe trying the Release Candidate (RC) versions if they have any.

Another option would be to try a system restore, however obviously that's a bit more drastic.

This issue is linked with the nVidia drivers newer than 306.97 as that's the latest confirmed-working driver available on Windows Update. I've only tested with 310.33, so anything newer than 306.97 but older than 310.33 might work fine, and 310.33 is still in beta so it's worth informing nVidia about this issue in the hope that a fix can be included when the newest 310.xx driver gets WHQL certified.

EDIT: On further investigation, it appears that there's more to this than previously assumed: It seems that when apps are put on secondary monitor, the problem exists even with 306.97. Can someone confirm this?

EDIT2: Submitted bug report on feedback form to nVidia, waiting to hear back.

Rolling back the Intel drivers fixed it -- but only for a couple of days. Uninstalling the drivers from "Programs and Features" also wouldn't stick. For some reason, the updated Intel driver kept reinstalling itself.

Once you are satisfied, you can then block display drivers from installing:

This finally fixed the problem, for good. The nice thing about this method is that it only affects the display drivers -- all other driver classes will continue to update, as before. Note that this setting will also block manual installation of display drivers -- so you will need to first unblock them before attempting an update.

Incidentally, Intel is aware of the mouse cursor problem and is looking into it. Might take some weeks or months to get a resolution, though: http://communities.intel.com/message/174556

I noticed this exact problem when I updated the drivers in Windows 7 on my laptop. Seems to be a problem with Intel's latest drivers, rolling back fixed it.

I have confirmed this issue through experimentation. I am running an geforce 670 for my main monitor and 2 others off of the onbouard Intel HD3000(2600k). When I change the cursor to the regular one and enable cursor shadows the problem goes away. If I turn off the other monitors on the Intel chip, the problem goes away. I placed the montitors on the Intel so that the power saving features of the nvidia would kick in. I have also tried moving all monitors to the Nvidia which works perfectly as well. I would say this is a strange bug with the Intel driver (latest here) regarding cursor shadows.

I have found that turning on pointer trails eliminates the issue completely. Setting the trails to the lowest setting makes them nearly unnoticeable. While this is a pain for gamers since you need to turn off pointer trails in order to see your mouse in game, this is still a fool proof solution to this problem until this issue is sorted out through a software update.

I have the same problem on laptop (Win 7 Ent. SP1 x64) with Intel HD Graphics 3000 (no other video card) - only when second monitor is attached. Removing the external monitor resolves it.

The cursor lag happens right after upgrade to 9.17.10.2875 drivers from Intel website (latest ones).

I had to exact same problem and I managed to solve it (at least temporarily) by going to the mouse settings and changing the text marker. I only changed it to a random icon and then switched back to the default and after that I've not experienced this issue again after several restarts and regular use of the computer. Try playing around with it yourself and see if you get the same result.

Same problem here with AMD Radeon 6850. I have a projector connected on HDMI and the default screen on DVI.

The problem exists since I connected the additional projector. Enabling cursor trails fixed the problem for me.

Not the answer you're looking for? Browse other questions tagged mouse windows-8 or ask your own question.