I seem to have a general problem with "access denied on Windows". It manifests itself every time if e.g:

(I have tried checking with Task Manager + Winternals process explorer that it is not process running still running that should cause the locks.)

The problem is recent, but some things I first noticed yesterday (when I started calling .bat files again which I have used for many years)

Here is a ascreenshot if I try change security of a "locked" file. (The problem here is the locking occurs continously every time the file is created) 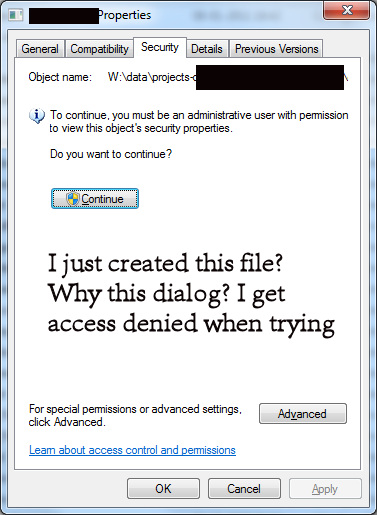 If I click onwards, it states I am not the owner? Instead I see this: "Unable to display current owner"

If I try to change ownership, I get "access denied" (don't have rights)

Which baffles me as I just created it. (Yes, through a .bat file calling executables that create the file. But all running under my administrator user account.)

I think this is some kind of weird issue of something somewhere holding file handles for some time after file has been attempted deleted by .bat file...

I have tried to walk away 5 minutes after the .bat file has issue the delete instruction. (Pausing .bat script) When returning (after minutes) the file is gone. (This took some time for me to notice since it was by accident I discovered this, but it seems I can repeat it)

So the reason for all the problems may be the file somehow is in a kind mysterious state where the file has been scheduled for deletion, but it just goes extremely slow? (And hence all other operations performed on the file also behaves very oddly.)

I have no idea why this is (have tried disabling e.g. AVG), but I guess it could explain the sudden problems?

Use Unlocker to unlock those files and then try to do whatever you want. Unlocker does natively support deletion, renaming etc, too.

[Optional] I'd also like to suggest you to scan computer for threats using Norton Power Eraser (Its free, portable; it can work along with AVG, too) if you don't exactly know whats causing the problem.

From this security Tab, click Advanced, Click the Owner Change link, in the Enter the object name box type your name and click CHECK NAMES then click OK. This will reset the Authority permission to you.

Maybe your file system is corrupted. (see quite similar thread)

Run chkdsk to fix it:

You might want to try checking the permissions for CMD. Also check your task scheduler in case there's anything unexpected going on.

Sachin Shekhar's idea of using Unlocker is good to see if there is any other processes that is concurrently using the file. The compiler may be having some sort of bug and "hogs" the file even after it has completed it's operations.

Windows 10 seems to drasicly have improved and solved the behavior. Files are no longer "locked" / "file access denied" for a very long time...

So changing o Windows 10 is kinda an answer as well. Since so many people contributed to the post, I wanted to share back my findings as well.

Yeah, running CHKDSK /R C:\ (at the next boot) did the trick! Afterwards it sounds relevant that the file system ought to be corrupted if you cannot take ownership of a file or folder you would be authorized to. Especially if Windows cannot state who's the owner of such a file or folder. Permissions have been clearly corrupted in such case. Many thanks for the tip! Cheers from France.

Not the answer you're looking for? Browse other questions tagged windows-7 file-permissions or ask your own question.