How can I prevent my computer from waking up accidentally?

When I put my computer into sleep mode, it will wake up while I'm away from it. There's nothing near the computer that could move the mouse or accidentally press a button and I have no idea what might be causing it.

I tried checking what woke it, apparently LASTWAKE only tells me that it has been in sleep mode, not what woke it up.

I also couldn't find anything in my Power Options regarding Sleep that seems off. Poking around in the Event Viewer I notice the following: 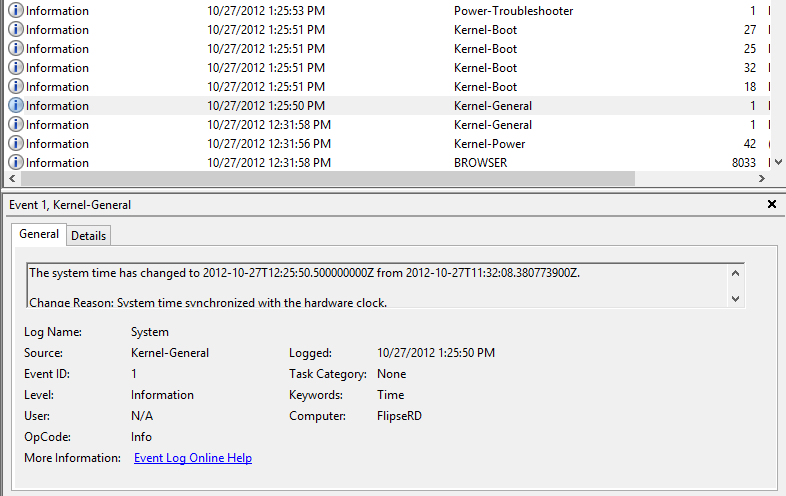 The Power-Troubleshooter event at the top notes the following:

The system has returned from a low power state.

So does anyone have an idea to find out what might be causing it and how I can prevent my computer from randomly waking up?

I've had this problem before when I had network shares that were hosted on the sleeping machine, but accessed by other machines on the network. There are some settings for network cards that determine if it can wake the machine from sleep, and under what conditions: 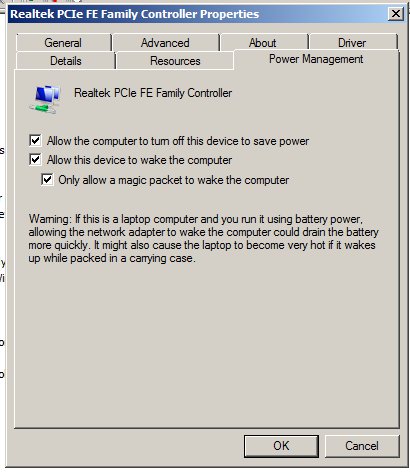 This TechNet article explains the power management settings for network devices on Win7. There's not a Win8 version of this page yet, but I assume they are somewhat similar.

Beyond this, many other devices with similar checkboxes to allow for waking - I'd probably advise turning as many of these off as possible, and seeing if your problem persists. If it does, you might consider a binary search style approach to figure out which one is the offending sleep-disturber.

If you type in your elevated command prompt powercfg /waketimers, it will display a list of scheduled tasks that will wake the computer. You might discover what could be causing this to occur.

If it is a wake timer that's causing this behavior, if you go into the Advanced power settings, under the Sleep category, you can disable Wake Timers. This might fix your issue, if this is the culprit.

For instance, I see this when executing that command:

Also, by the way, I did recall this occurring with my laptop once. It took a bit of troubleshooting, but I discovered that the culprit was my Microsoft Arc Touch Mouse. I discovered that the USB dongle (which received its wireless signal), caused the computer to periodically wake up, even though the mouse wasn't powered on. I fixed the issue by finding the USB device in the Device Manager and, under Properties, turning off "Allow this device to wake this computer". However, I found a more prudent solution was to just not leave it plugged into the laptop all the time. :)

You should check if you have anything similar to this in your BIOS: 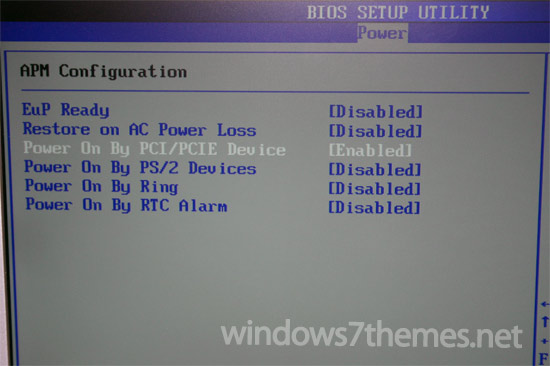 Setting everything to disabled at the "Power" tab should override any Windows settings.

I fixed this by doing the following:

There might be a scheduled task for the night that wakes up the computer.

I would check "Schedule tasks" (or whatever it is called on Windows 8), and specifically in your case the task of Microsoft / Windows / Time Synchronization / Conditions tab / check-box "Wake the computer to run this task".

Some helpful articles (and their comments) :

Then I went through all the sub folders of in Task Scheduler, and modified all remaining tasks to run during weekdays, at lunch time or at dinner time. I've also set to have an idle period of 15 minutes, and to stop if I resume using the laptop. For example windows backup slows down my hard drive access, and I don't want it to interrupt my work, and it will run next day anyway. See the two screenshots below.

I like to wake up my laptop with the mouse and keyboard, but then I disabled the mouse. It woke the laptop even just by shaking the table a bit, and sometime even without movement (probably due to the wireless connection of the mouse). So now, I stick to the space bar (it is a wired external keyboard). 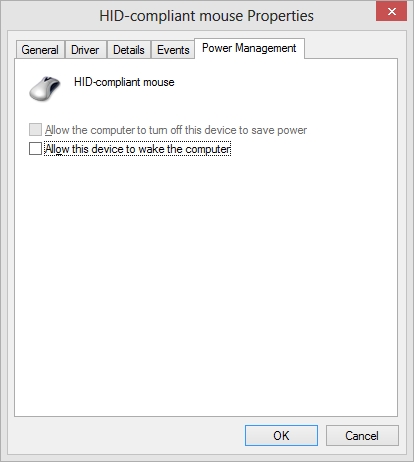 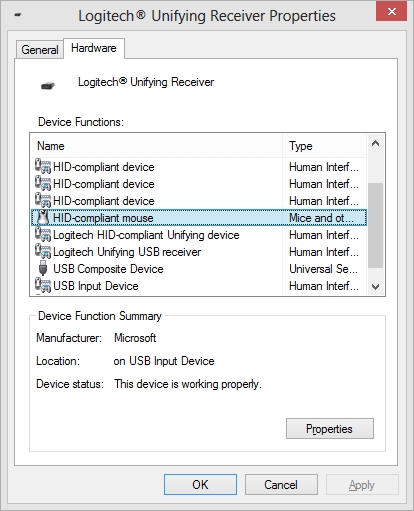 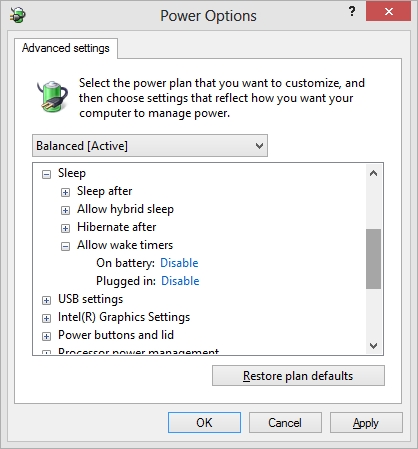 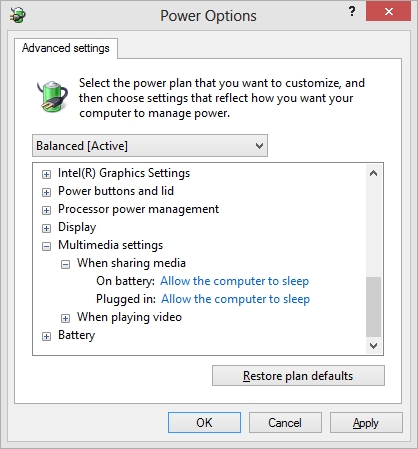 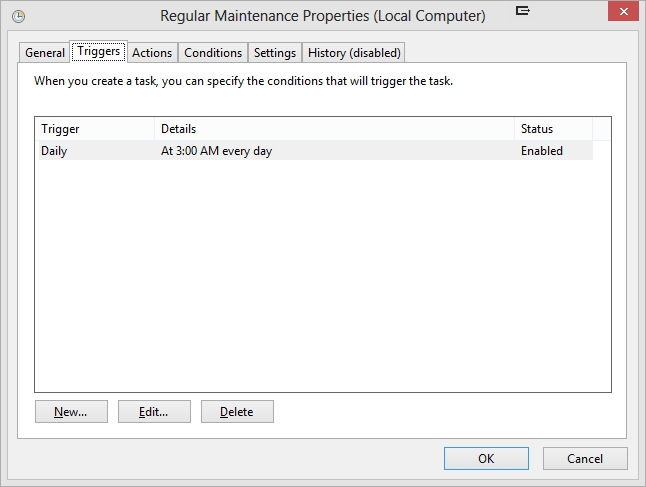 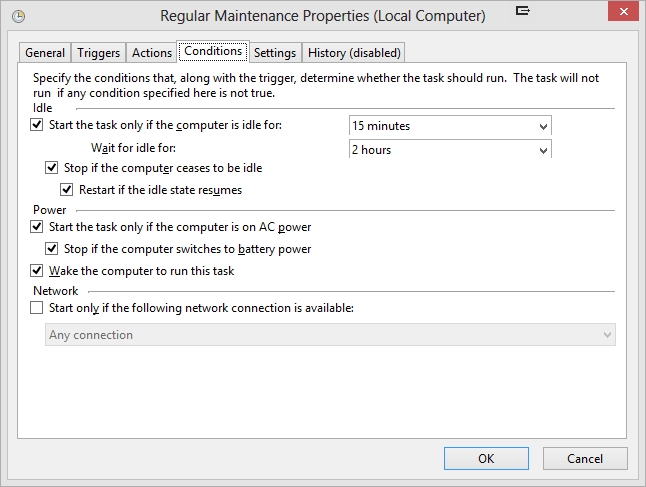 The "regular maintenance" setting can also be accessed through: Control Panel\System and Security\Action Center\Automatic Maintenance

Well, I have not really had a lot of time to investigate this. This problem sort of comes and goes, and I don't have all the time in the world to sit by the computer and wait for it to misbehave. But at least in my case, this appears to be related to the internal workings of Windows 8 and its different scheduled tasks and triggers. 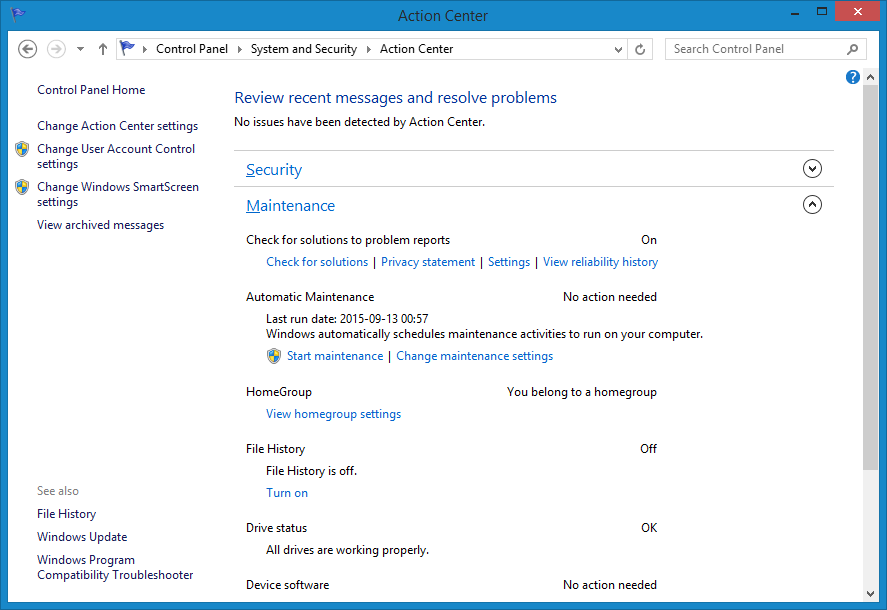 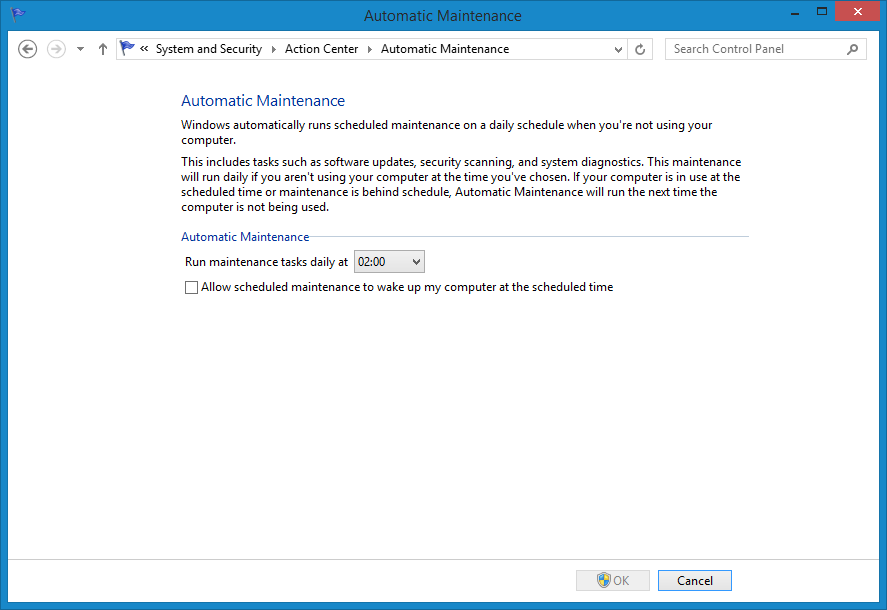 Note that the option "allow scheduled maintenance to wake up my computer at the scheduled time" is checked.

Windows automatically runs scheduled maintenance on a daily schedule when you're not using your computer.

I am often late with installing Windows updates, and I install them manually. This is because I need my computer for work, and I prefer to review the updates before they are installed. I therefore prefer to install them at my own pace and when I have time. I simply like to be in control of my own computer. Not some wise guy from Microsoft telling me how to run my system. But because my update installs are often overdue, the Windows 8 is apparently configured to kick in some of these scheduled tasks, and even wake the computer if necessary and install the updates for you, and successfully install the updates by overriding your user preference not to install updates automatically.

They have stepped this up now in Windows 10 to the point where you as a user don't even have the choice to review and install updates manually. Go figure... your computer is remotely controlled and dictated to from Redmond. Nice! 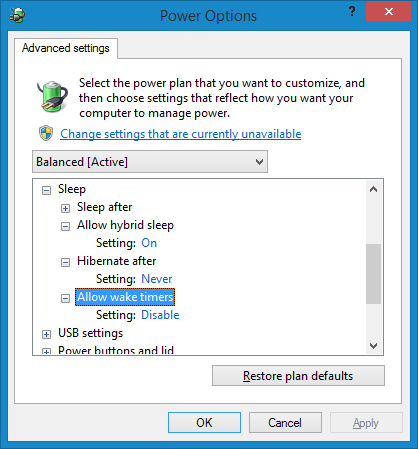 In the screenshot above, you can see that the wake timers have been disabled. 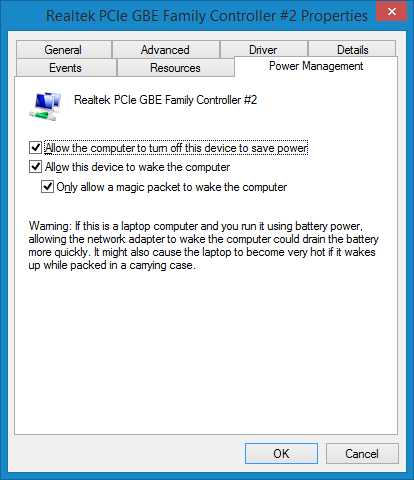 I actually use WOL (wake on lan) and I can't have it disabled. I don't want to! I choose not to! But this should not affect the problem that's being described. If there was any unexpected wakes due to network devices waking the computer by sending some gibberish packets on the network, this should be remedied by enabling WOL only for magic packets (as suggested in other answers here).

But the reason the computer is still being waken up is highly likely because of the way Windows 8 is configured to trigger scheduled tasks that wake the computer. In my case, these appear to be caused by overdue Windows update installs. 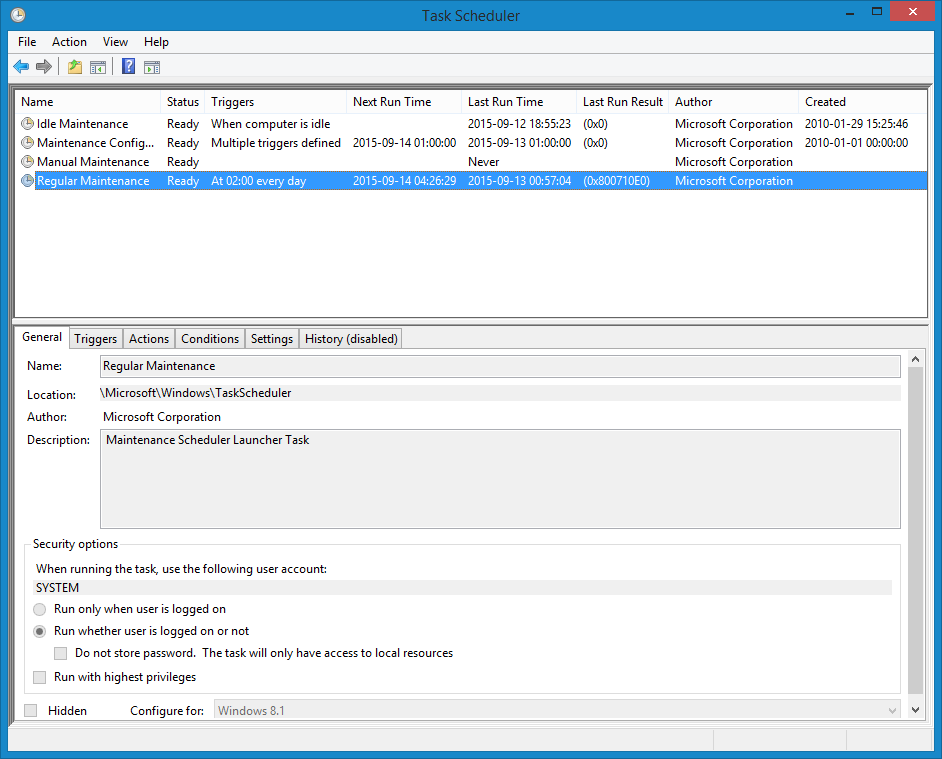 You can see in the screenshot above that the Regular Maintenance task last ran on 2015-09-13 at 00:57 hours. That's the same date and time as seen in Action Center.

I believe this is what's causing the infamous Wake Source: Unknown string to be printed for the powercfg -lastwake command. If you want to try to prevent the computer from waking up unexpectedly (and gain back some control of your computer) I would suggest disabling all of these scheduled tasks:

You will find these by running taskschd.msc from the run prompt and navigating to their location.

I just had my computer wake me up and disturb my sleep, because it can't sleep, or it won't sleep. This thing is out of control! It's sick! It's alive! I will have to hospitalize it or myself.

As usual... useless! But the next command pointed out a possible culprit.

I did have Spotify running in the foreground. Once I exited Spotify, the wake timer disappeared.

Go figure! But I should mention that I am overdue with Windows Update... updates. Again! But also worth mentioning, is that I have disabled WOL for the NIC a few days ago, and I have rebooted since (so those settings should be applied). So this clearly shows that WOL is not the culprit... at least not in this case. (Unless those little check boxes in Device Manager are broken, and are indicating a disabled feature but clicking on them is not changing anything in the system.)

I don't have the time and energy to investigate this further, especially not at this hour. I need my sleep. So does the computer... but some corporate jerks across the ocean seem to think otherwise so they had the system programmed to disobey my commands. Well.. I guess I will have to start pulling the plug! Hah! I would like to see them beat that old-fashioned trick. Remove the power and it should not wake up.

Wade through all the scheduled tasks in Task Scheduler and, under Conditions, make sure that "Wake the computer to run this task" is NOT set (except for those where you may actually want this action). You can also control whether the task runs on battery or not, if you have a laptop.

1
Why is Windows 8 waking up the PC even when there are no wake timers and no pending maintenance tasks?
6
windows 8 desktop wakes up immediately after sleep due to keyboard/mouse
9
cannot hibernate anymore (but standby)
6
Windows 8 waking issues - "Maintenance Configurator" task cannot be changed or disabled
3
Laptop turns on spontaneously

6
windows 8 desktop wakes up immediately after sleep due to keyboard/mouse
3
Computer goes to sleep, then powers up
0
How can I find out what's waking up my ultrabook?
67
Computer wakes by itself, but wake source is unknown
2
Why is Windows 8 waking up my computer unexpectedly?