I have a few piece of junk homemade programs that use the Windows POSIX sublayer. Does Windows 8 x64 come with SUA?

Can somebody verify that it is there? All I can find is that it was "deprecated" but the news seems to be from a year or two back.

In the Enterprise Evaluation (essentially, a trial version of Windows 8 Enterprise RTM), SUA is still available through Windows Features, though listed as deprecated: 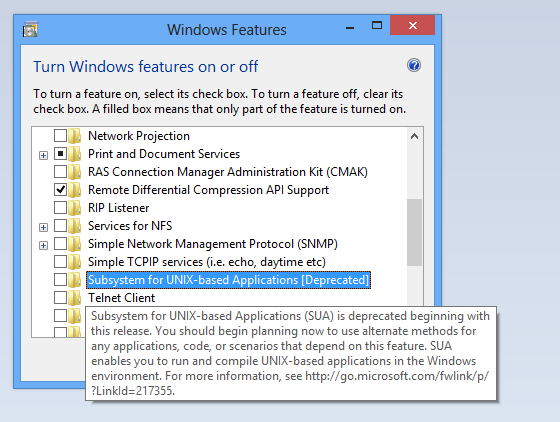 WARNING: SUA is deprecated starting with this release and will be completely removed in the next release.

SUA is being removed from Windows kernel. It shows as DEPRECATED which means this is probably the last version of windows which will support it.

Here is a link that suggests so. http://blogs.technet.com/b/sfu/archive/2011/10/03/installing-sua-components-on-windows-8.aspx

SUA is not available in your version of Windows 8 Professional.

You should look for alternatives such as Cygwin or UnxUtils.
A commercial alternative is MKS Toolkit

I don't think this will affect Windows 8, but it might be interesting for newer releases.

In 2016 a new official Linux-like API called "Windows Subsystem for Linux" was announced. It includes Linux system calls, ELF running, parts of the /proc filesystem, Bash, GCC, (TODO likely glibc?), apt-get and more: https://channel9.msdn.com/Events/Build/2016/P488 so I believe that it will allow Windows to run much, if not all, of POSIX. However, it is focused on developers / deployment instead of end users. In particular, there were no plans to allow access to the Windows GUI.

Not the answer you're looking for? Browse other questions tagged windows-8 sua or ask your own question.