How do I restore the desktop tile?

I'm using Windows 8 and have managed to lose the Desktop tile.

How do I put it back?

From the Start Screen, type Desktop and you'll find it again.
You can right-click it in the search results and click Pin to Start to bring it back permanently. 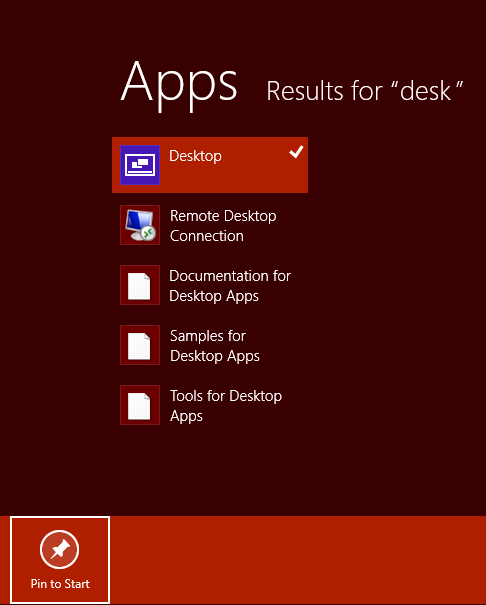 In certain circumstances, the Desktop tile can disappear without being removed by the user. The other solutions to this question do not work, as the Desktop entry disappears completely from both search and the All Apps screens.

A further symptom of this scenario is that the Store tile will also disappear.

This is due to a corrupted or replaced system file. In this case:

SFC will then scan your system files and replace the problem file. The Desktop and Store tiles should then become available.

If it fails to replace the files, you may have to perform the scan at next boot by using sfc /scanboot then rebooting the machine. Once completed use sfc /revert to return the tool to normal operation, or it'll scan on every future reboot.

In the Modern UI, search for Desktop, right-click on the result and then click 'Pin to start'

You can also use Alt + Shift + Esc to go to your desktop I have not tried this one in windows 8 but I guess it should work -> Win + M minimizes all windows and shows your desktop.

In that particular case you need to add the shortcut link file back, I got it from here thanks to this discussion Lost "Desktop" shortcut/tile in Metro UI at www.eightforums.com

2
Windows 8 suddenly removed my Desktop tile from the start-screen, how to restore it?