I have a desktop workstation that uses Wake on LAN (WoL) functionality. Is there a working wireless adapter solution that someone has set up that would provide the same functionality?

i.e. When the desktop is sleeping, a network packet should be able to wake the computer through the wireless LAN.

WOL works by sending a 'Magic Packet' to a network device. The network adapter triggers a wake up event when a broadcast frame and 16 subsequent frames with the MAC address are received.

In the past, WOL could not be enabled on wireless networks because hibernation / sleep would cause the wireless card to turn off.

802.11 wireless interfaces do not maintain a link in low power states and cannot receive a magic packet

According to Revolution Wifi:

Because you are using a desktop, and WoWLAN is only available on wireless cards integrated into the motherboard (not running on the pci bus). If the following checkbox is greyed out, your card does not support WoWLAN. 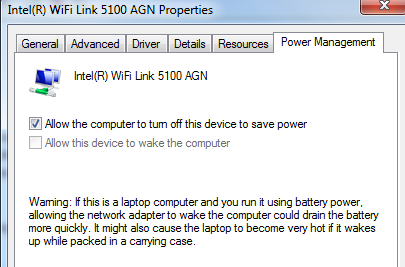 Not the answer you're looking for? Browse other questions tagged windows-7 wireless-networking sleep wake-on-lan or ask your own question.

5
WOL doesn't work when shutdown
2
Wake-on-LAN (WOL) fails after computer crashes (Windows 7 64-bit)
5
Wake on LAN prevents sleep mode in Windows 7
1
Does the Atheros AR956X WLAN adapter support WoWLAN (Wake on Wireless LAN)?
2
Teamviewer WOL does not work
2
For Wake-on-LAN and Wake-on-Wireless computer must be only suspended or can be powered off?