How to enable Integrated Load Balancing in Windows 8

One of the cool new features many sites mention is "Integrated Load Balancing" in Windows 8. It is supposed to do the following:

If you have multiple active network connections, Windows 8 will intelligently balance the network traffic between them for performance

Source: Short: Some of what Microsoft didn’t show of Windows 8

I would love to see this feature in action. I am connected to a WiFi access point and to a different network by cable. Yet I don't see the operating system 'intelligently' balance the network load when for instance downloading multiple files. Is there any way to enable it or should I adjust my expectations?

The "Windows 8" in the linked post you provided is actually just a general pre-release reference. In the end the NIC teaming functionality is for Server SKUs (now called Windows Server 2012), which is why it's not working for you. :)

This is evidenced by the fact that to set up teaming you're supposed to use the "Server Manager" UI: 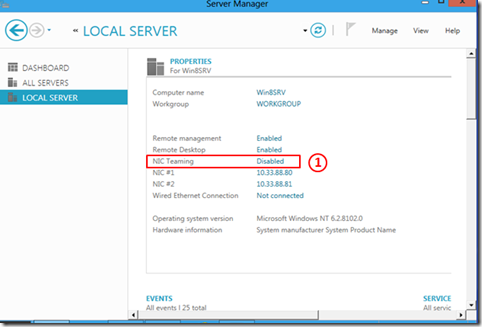 Also, if you try to use the PowerShell command for network teaming on Windows 8, it will tell you you need a Server SKU.

And also, according to this document from MS (from back when it was still refered to as "Windows Server 8 Beta"):

Teaming is a function that offers network connection load balancing and failover by connecting multiple network interfaces. Earlier, this function was managed by NIC vendor’s driver and management program. However, with the onset of Windows Server 2012, NIC Teaming has become a part of the operating system and provides support for Hyper-V networks.

Windows 8 can monitor traffic by using virtual LAN so as to make software connect to different LANs simultaneously. Users can also use different configurations, either switch-dependent or independent ones. You can select algorithms to disseminate inbound and outbound traffic as well.

I believe it is targeted towards server-systems and not towards the other editions as they wouldn't really benefit from this improvement.

That said, you could go about doing it in Windows 8 as detailed here.

Even if you enable integrated load balancing, defaulting to cabled network is the optimal fusion of networks as the cabled network will have lower latency and hence faster browsing.

The senario where you are doing throughput only operations is considered less likley.

If the balancer is designed corectly, it will only switch to the second, wifi network, if you saturate the wired network. This is the way it works with home office style load balancers.

Not the answer you're looking for? Browse other questions tagged networking windows-8 or ask your own question.