Transferring a Windows 8 license and proper un- and reinstallation

I have two computers: a laptop and a desktop computer. Both have Windows 7 on them.

I buy the Windows 8 Pro upgrade. To see if it screws up anything, I install it on my laptop as a guinea pig. I intend to use Windows 8 for my main computer, my desktop, but I want to test it on the laptop, so I know I don’t risk losing access to my desktop and the data on it. I never use my laptop, and only used it, because it already has a Windows 7 installation on it.

At some point, I must have entered the license key on my laptop, because when I go to the activation screen on my desktop, I get this: 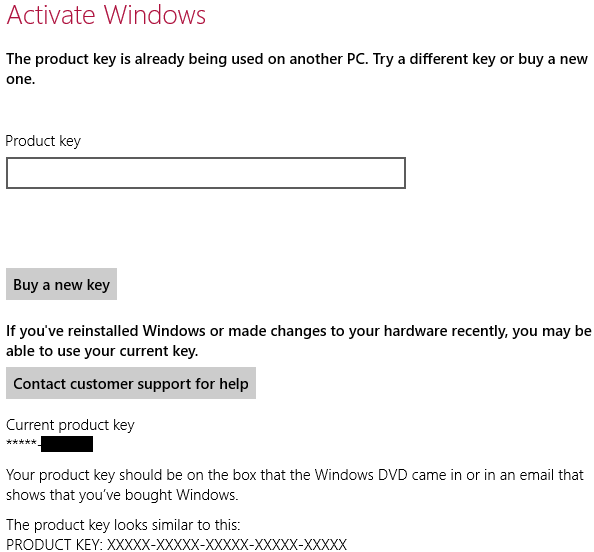 Uh-oh. I can’t use the key on my desktop. Now how the hell do I transfer the key from my laptop to my desktop computer?

Answers and suggestions so far

Let’s just say that I tried everything possible to get some answers on this matter. The best response I got from Microsoft is this:

To install Windows 8 on your desktop, do the following:

I am not a fan of that last point. The error message does allude to such a solution, however:

If you’ve reinstalled Windows or made changes to your hardware recently, you may be able to use your current key.

My main question is this: has anyone been in a similar situation, and if so, what did you do to resolve this?

Failing that, what is the proper way to

I have already tried using the “reset” feature on my laptop, but that only resulted in a new Windows 8 installation that was already activated. But which is the right way to uninstall the installation in a way that allows me to use the license key on the desktop computer?

Which is the proper way to reinstall the Windows 8 installation on my desktop computer? Why do I even have to reinstall it in the first place?

I won’t get around to do this, until my USB key with 3.0 support arrives in the mail, but it is going to be a while, until I find a assuaging response to the best way to go about this anyway.

Just got back from talking with Microsoft support on phone, and here is how we made it work—without formatting the desktop computer.

EDIT: The bounty message is gone now, but I added my own answer as a canonical one, because as many interesting suggestions as there were, none had been demonstrated to work, although they very well might. We couldn’t leave people hanging, in case something didn’t pan out.

So here is one case of a solution that worked out, not just in theory:

I did not touch the laptop at all throughout this.

I got a phone call from Microsoft support, which was unexpected. (The e-mail supporter had been sick awhile and hadn’t responded as a result, so they decided to call to check up on me).

He told me that I didn’t have to format the laptop, and that we could just activate the desktop over the phone.

Normally, I would have to go through a dial prompt, when I tried activating myself, forcing me to enter all the numbers by phone, but it is possible that this only happened, because I called outside the regular hours* (in one case leading me to a dude with an Indian accent in some call centre who understood little to nothing of what I said).

The problem here was getting in touch with a local support person at Microsoft, which in this case only happened, because the woman I had corresponded with (through their website) over e-mail was sick and had not gotten in touch with me for a while.

But I finally got in touch with someone capable, and here’s what we did:

We first opened up the activation prompt: 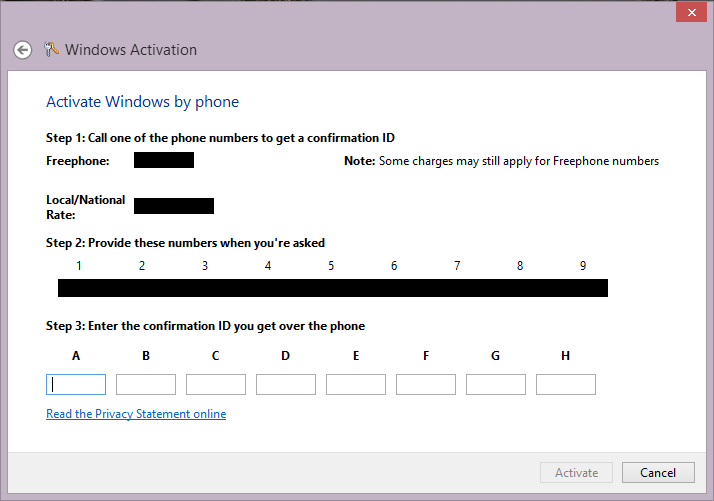 With regards to the other computer, the laptop:

I am choosing to accept this answer for the moment, because it is the only one with a proven record of actually working. I welcome more, and better, answers from people who by their own experience or that of their acquaintances can vouch for their solution and walk-through.

I won’t be the first, only, nor last person with this problem, and people need a good place to find help, if they run into the same problem I did.

From an elevated command prompt, try slmgr /upk to uninstall the product key on the laptop, then try activating on the desktop. If it works, there should be no reason to reinstall anything.

so in my case helps just to call local number provided after Win + R -> slui 4.

After that I just add numbers from first 8 blocks on my cell phone and machine just generate for me second group.

Now Win 8 activated, all on phone in my native language, no need to speak with a person, just with machine. Easy as it could be.

I had installed my upgrade in a VM on my Macbook Air, and decided that I wanted to put it on my desktop since I needed the space. I installed using the same key and download link from my purchase email, then went to the same prompts via

Called the number, and entered the long ass code

But when asked how many computers this was installed on I said 1 (one) and the system gave me the new code to enter.

I assume the same is true that now I just need to delete the VM and all is well. I will likely open it once more and see if I can get any files off that I may need, but basically it works the same without the need of using a live rep.

Not the answer you're looking for? Browse other questions tagged windows-8 windows-installation windows-activation or ask your own question.

2
Can I Transfer The Windows 8 License of My Laptop to My Desktop?
0
How to reinstall retail Windows 8.1 Pro on another PC?
1
Migrating windows 8 license from one machine to another
2
Where to find the Windows 8 Product ID (PID)
2
Transfer Windows 8 licence from VMWare to new installation

127
Windows Activation FAQ: How do language, version, 64-bit or 32-bit, and source affect ability to install and transfer Windows licenses?
5
How long is the Windows 8 activation period if I do not connect to the internet?
15
Is Windows 8 Pro usable without activation?
6
How to uninstall a license key
1
Windows 8-7 downgrade, reinstallation and gpt partitions
0
Does a Windows 8.1 OEM license key work on a Windows 8.1 pro install?
2
Back-up Windows 8 installation and license
0
How to activate Windows 10 Pro with a refurb license
1
Converting manually activated Windows 10 to a digital license?