I am using SQL Server Management Studio 2012. I am trying to print a stored procedure in the color-coded syntax that it loves showing me, but cannot find an option to enable this. Any ideas?

I know on VS2010 that we (finally) got color output for text, via an add-in on MS's site, but I cannot seem to locate anything for SQL Server Management Studio via Google. Why am I printing this thing out? Because it's 15 pages long, and I am trying to clean it up.

IMHO you just print it out.

I'm using SQL Management Studio from my SQL Server Developer 2008 R2 installation and anything that is displayed in colour gets printed in colour.

You might be experiencing a problem with your printer.

From Color syntax printing in SSMS 2012:

The color printing extension for Visual Studio 2010 works just fine for adding the color print ability to SSMS 2012. Download the VSIX package, and unzip into it's own directory in your to your SSMS extensions folder - most Likely:

You'll then want to modify the extension.vsixmanifest file. In the <SupportedProducts> section add:

After that, restart SSMS, and you'll have the ability to print in color, even if it doesn't look like it.

Also, the fact that the Offical Documentation page lists the ability to modify the printer colors, and it has been supported in previous versions, and the interface has the ability to adjust printed colors, makes me think that this is a long lasting bug. 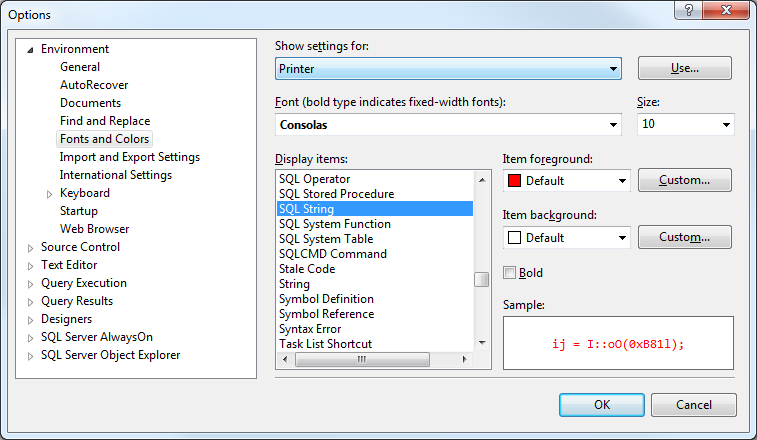 Not the answer you're looking for? Browse other questions tagged sql sql-server ssms or ask your own question.