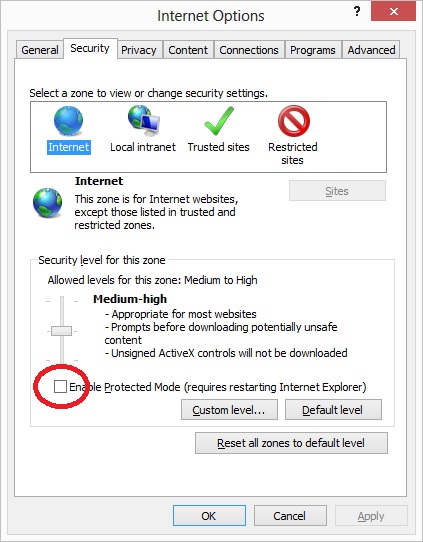 Why doesn't disabling IE's 'Protected Mode' enable the dragging-and-dropping of addresses from the IE address bar into Notepad? Is there a way to make that work without adding a registry entry for Notepad (following the instructions in the article I mentioned)? In fact adding the following to my registry in HKEY_LOCAL_MACHINE/SOFTWARE/Microsoft/Internet Explorer/Low Rights/DragDrop under a GUID key does not enable Notepad to accept these addresses

(N.B. This is actually part of me trying to work out how to get this address drag-and-drop working in Processing.)

Drag and drop is a lot more complicated than just moving text around. It actually uses the same mechanism as the clipboard. Everything that is dragged has a number of formats associated with it and the sending and receiving application negotiate a bit over what each one supports until they reach a mutual agreement.

This agreement is what you see when you drag an URL from a browser to your desktop or Explorer window – it results in an Internet shortcut or .url file. This also hints that what is dragged in that case isn't the text of the URL but rather the format “URL” which Notepad is unable to accept and convert into text (well, technically it's probably just the standard Windows TextBox control since that's what Notepad is).

You can see the same issue with Chrome if you drag a URL from the address bar around.

In short: It's likely not a permission problem but rather that two applications cannot agree on a single format to marshal the dragged data.

EDIT: A little testing reveals that apparently Notepad won't accept dragged text at all but it can handle paths. So you can drag a file to Notepad but not snippets of text.

Not the answer you're looking for? Browse other questions tagged internet-explorer notepad drag-and-drop protected-mode or ask your own question.