I'm thinking of upgrading the "backbone" of my network, taking a Cat 6 cable from my router (DLINK DIR-655 (has Cat 6 ports)) to a gigabit swith in the tv room (25 m). I have two devices there that uses network (Xbox and tvbox, both of them have Cat 5).

From back in the days I have a tool to create my Cat 5 cable (the plug tool thingy). Can I use this for my Cat 6 cables too?

Think of your network as a branching chain of links.

Your connection speed for a given device is only as fast as the slowest link back to the WAN (in your case, the ISP modem).

So, for the setup you described, your Xbox will only have 10/100 speeds (Due to the cat 5 being the slowest link) but anything that can path back to the WAN using ONLY cat6 will have gigabit speeds.

Also, you need to factor in the router and switches themselves. if they are on 10/100 ports, anything flowing through that port will be limited to 10/100 speeds.

as to terminating the ends. Yes, cat6 and cat5 both use the same RJ-45 connectors, though the wire order is slightly different. follow this diagram for cat6. 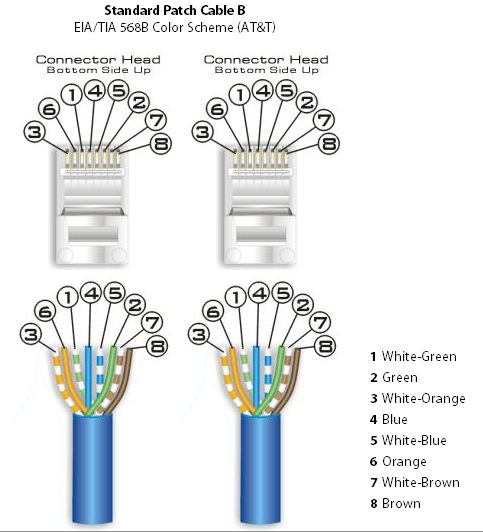 Not the answer you're looking for? Browse other questions tagged ethernet gigabit-ethernet or ask your own question.

1
Gigabit Ethernet wiring
3
Cat5e network that runs longer than 30' (10 Meters) will not connect at Gigabit speed
0
Can I add a gigabit switch to my D-Link WiFi router for gigabit networking?
1
Why doesn't my PC sync at gigabit ethernet speeds?
1
Upgrading my home network to Gigabit Ethernet and Wireless-N turns out slower than before
1
File transfer over specific network
4
Rejoin split ethernet cable?
0
Gigabit router seems to only support 100mbps WAN?
4
new cat 5e wiring, 100Mb link
5
How to fix Ethernet speed being stuck at 10 Mbit in Win10?