I setup backup of my Windows 8 laptop with Windows 7 File Recovery (known as Backup and Restore in Windows 7).

Backup of files runs successfully. But if I try to create system image, it fails with error 0x807800C5: 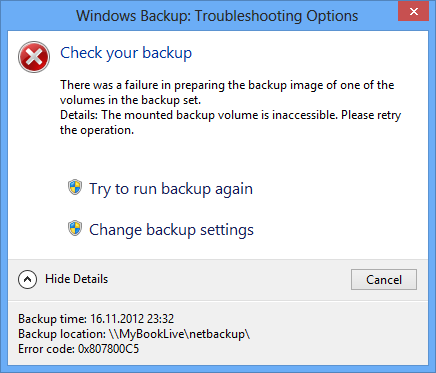 Error details on the dialog:

The mounted backup volume is inaccessible.

There was a failure in preparing the backup image of one of the volumes in the backup set.

I save the backup to a network location, WD MyBookLive.

I tried some of the steps suggested in the various thread about this issue:

I tried searching Google for error code but I've found no solution so far.

Update:
I submitted technical support request to Microsoft. The first suggestion was to clean boot, but it didn't help. I pointed out that I had tried all the methods from the same problem on MS Answers, and nothing had helped.

I tried to save full system image to an external hard drive, it was successful. So creating the image fails only when saved to a network location.

Note: This feature has been removed from Windows 8.1 in favor of File History. You can still create full system image yet I didn't find an option to schedule it for automatic creation.

I still have no complete solution to this problem although I've found a workaround in my environment.

Workaround:
Use a network folder without access restrictions as the backup target, that is every user in the (local) network has read and write access to the folder. Windows does not require user name and password to view the contents of the folder.

If Windows asks for a password when you try to open the network folder, creating system image in Windows 8 fails. Of course, the correct credentials are provided to the Backup service, and file backup completes successfully. This feature works in Windows 7 without any errors.

My request to Microsoft support brought nothing. They made me follow the standard procedure which didn't fix the error. They even gave me the utility, wbdiag, to collect additional debugging logs. It didn't help either.

I pointed out that system image is created successfully when network folder is globally writable. Support engineer said he could not reproduce the problem when saving backup to a network folder which requires special credentials.

After that they closed my request as File Recovery feature in Windows 8 works correctly. Since NAS is not Microsoft product, they can't provide support for it. They didn't noticed the fact that saving system image to a network share on Windows 7 fails with the same error as when saving to the NAS.

I quote from How Windows 8's Backup System Differs From Windows 7's :

With Windows 7, you can back up any files on your computer – not only personal files, but program files, system files, and anything else. You can also create full system images that can be used to restore your computer to its current state in the future.

There’s been a major philosophical change in Windows 8. You can no longer create full system images, nor can you back up everything on your hard drive. Instead, you can only back up files in your libraries, files on your desktop, your contacts, and your browser favorites. Windows 8’s File History feature is designed to protect users’ personal files, which are generally irreplaceable. In contrast, there’s less need to back up system files because operating systems and applications can be reinstalled from elsewhere.

This seems to say that in Windows 8, Microsoft has decided for us that we no longer need system images (!).

Nevertheless, some people claim they have managed to create system image backups using Windows 7 File Recovery, as long as this was done to a local drive and not via the network.

So if you insist on system image backup (and rightly so), it is time to look for a third-party product. The Windows backup utility has since always been a weak tool with many idiosyncrasies, that I never recommended using.

There is a discussion of backup tools in Gizmo's article Best Free Drive Imaging Program and in its comments, recommending several free products. The best-noted product, and my personal favorite, is the free AOMEI Backupper Standard.

Backup service runs as Local System account, it has no way to see user's mapped drives

Map the drives as "Local System account" with proper credentials and use drive letters to access your target volume. The mentioned IOPL error may be an indication of wrong permissions, such as when a login-only drive is accessed anonymously.

I have to admit that I am guessing in this case. However, it's not a haphazard suggestion: An application will include support for accessing local files in a whole lot more cases than support for accessing "samba shares" directly. So if you let the OS handle file access over the network, your backup software will be more likely to succeed.

I have a Buffalo TeraStation NAS and experienced the same issue. After providing the group 'Domain Computers' write access it worked for me.

I was facing the same error code while trying to create a system image backup in windows 10. The solution that worked for me was simply disabling windows defender.

When in doubt, disable windows defender.

Seems a computer with more than one EFI partition (including on a second disk, even if external) prevents the backup from executing.

My destination disk used to be the main disk of another laptop, which prevented the backup from executing. Doing a diskpart clean to erase the disk worked.

I had the problem after upgrading/updating Windows 10 (creators/anniv./.. update).I had a backup on my target (networkshare) already of my Windows 10 machine. Only one image is allowed of Windows in there. I guess that after upgrade it detects that it is a different Windows (not sure), and this might be the reason why it fails.

I removed the backup from that folder and it worked again.

After searching the web I found another user who had similar:

Then restart your backup and find out that now it works.

Let us know the status of the issue. Your reply is need to assist you further. Regards,

(Of course make sure you have enough permissions to write on that target location… E.g. add "Domain computers" to it and give read/write permissions. Note that for example Nvidia creates also a user on your pc for its driver. I don't take this data in my backup, maybe this user doesn't have permissions on the target if you also include it in your backup… I only take my user data.)

Not the answer you're looking for? Browse other questions tagged windows-8 backup or ask your own question.