Does the wattage on a power supply simply mean the max output wattage?

If I have a system running at ~500W of power draw, will there be any tangible difference in the outlet wattage draw between a 1200W power supply vs, say, a a 800W power supply? Does the wattage only imply the max available wattage to the system?

I am aware this is not the correct answer, but cannot delete it because it is accepted. The right answer is given by Hennes.

The wattage of your power supply is what it could potentially supply. However, in practice the supply won't ever make that. I always count 60% of the capacity as the truly maximum capacity. Today however, there are also bronze, silver, gold, platinum power supplies which guarantee a certain amount (minimum of 80%) of efficiency. See this link for a summary of 80 PLUS labels.

The wattage implies the maximum available wattage to the system.

However note that the PSU draws AC power from the wall socket, converts it to some other DC voltages, and provides those to your system. There is some loss during this conversion. How much depends on the quality of your PSU and on how much power you draw from it.

Thus if you get a PSU which is 'just large enough' or 'way to big' it is likely to be less efficient.
[But note that your PC does not consume a fixed or constant level of power. At idle, when not much is happening, the DC power consumed will be low. Perform a lot of processing and I/O operations, then power demand goes high.]

Bellow is a nice example of a real world efficiency graph for 900W PSU. The x-axis shows the power supply load in Watts and the y-axis shows efficiency. 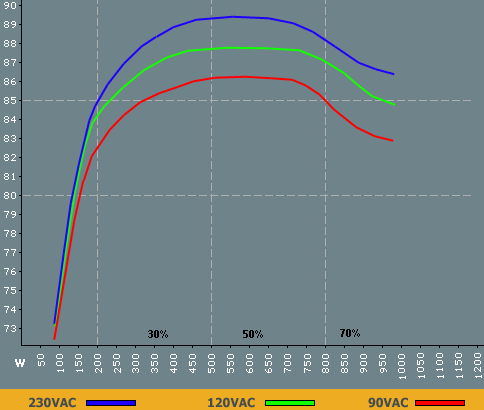 Note that even with a good (bronze+ or silver rated PSU) you are still loosing about 15% during conversion. 15% of 500 Watt means that your computer would use 500 Watt, but the PSU would draw 588 Watt from the wall socket.

For the most informed reading about PSUs go to this site and especially read the article "Firecracker or Power Plant" Very informative even for the lay person.

manufacturers of electrical power supplies often indicate the input power (the power which it consumes) because it is the higher value and can be marketed better. you should check if they also indicate the output power to be on the safe side.

regarding efficiency there is a big difference based on the technology used. the efficiency is calculated as efficiency = output power / input power.

4
Why are computer power supplies seemingly inefficient?
1
What is 80PLUS?
0
Does PSU Wattage Matter
1
Regarding power supply unit's power