I frequently need to access bare drives for backups and need a quick, high-speed way to deal with them.

There are a multitude of SATA hard drive docks (for example), but I have a lot of IDE/PATA (hereafter "IDE") drives that I would like to be able to use similarly. There are IDE-to-SATA adapters so you can plug your IDE hard drive into a SATA port, so I don't see any reason why you couldn't use the same technology to have a native dock, yet none seems to exist.

Now, I'm aware that 3.5" IDE drives do not have a specification for the layout of the connector, and therefore can't be slapped into a dock the same way a SATA drive could, but 2.5" PATA drives do. In fact, I'm not terribly interested in supporting 3.5" drives. It would be nice, but I deal with them far less frequently than 2.5" drives.

Also, I'd very much like for the connection to the computer be faster than USB, preferably eSATA, I don't want to be spending time mounting a drive inside an enclosure, I don't want bare drives lying around with a cable hanging off of them, and I'd prefer a single dock rather than two.

What seems like the ideal solution to me would be a regular SATA→eSATA dock and some sort of screwless adapter for IDE drives, but I'm open to any suggestions, regardless of my stated preferences, but which are, in some sort of order of preference:

Here's a 3.5" IDE to 3.5" SATA docking adapter that could be part of the solution. Weird. I figured that would be the impossible part.

I was hoping to find something like this 2.5" to 3.5" SATA chassis that would take a 44-pin IDE drive internally.

It looks like the Vantec EZ Swap EX comes awfully close. It has its own bay dock, but it looks like the SATA ports on the back are spaced properly, even if they're not aligned quite properly. Unfortunately, the proper position is at the very edge of the drive, which means that the docks' connectors are at the very edge of their recesses, which means there's no way to fit it in there.

Here's a 3.5" IDE to 3.5" SATA docking adapter that could be part of the solution. Weird. I figured that would be the impossible part.

I was hoping to find something like this 2.5" to 3.5" SATA chassis that would take a 44-pin IDE drive internally.

Perhaps it would be possible to kludge something together using the 3.5" IDE to 3.5" SATA docking adapter you found?

There is also this smaller 2.5" to 3.5" converter which might be of use if you wanted to fabricate your own drive attachment scheme.

The Sharkoon Quickport Combo eSATA seems to be exactly what you're looking for.

Sharkoon is a German company though, so I don't know about availability in your area. Should be relatively easy to find in Europe. Don't know about the Americas though.

This will do everything through USB 2.0: http://www.newertech.com/products/usb2_adapt.php ...if you don't want cables lying around, I would suggest mounting the drive internally and running the USB cable out through a PC card slot and plugging it into the back of the PC.

A non-ideal solution, especially if it doesn't meet your speed needs, but it would certainly work for streaming video.

The IDE-SATA converter you mentions has a list of compatible docks. You could try SATA HDD Dock Station with 2-Port Hub (USB + eSATA). It connects via eSATA and supports both 3.5 and 2.5 drives as well as IDE drives using that IDE -> SATA converter.

You might need to do some hunting, as IDE/PATA is going away, but I would recommend buying a 5.25" firewire enclosure and IDE mobileracks. Using 'firewire ide bridgeboard' on Google you should be able to find shops that would ship to your country.

I am using a cheap DIY version with a firewire bridgeboard, old SCSI CD-ROM case and couple IDE mobileracks. Looks something like this: 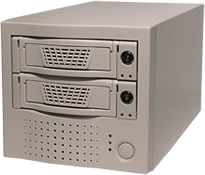 0
IDE hard drive and a SATA Dock
24
How can I use an old PATA hard disk drive on my newer SATA-only computer?
7
External SATA drive does not work without the optional USB cable *also* connected
1
Convert to 2.5 IDE laptop using SATA drive
11
2.2 TB limit applies even to eSATA drives? 3TB appears as 746 GB
4
eSATA enclosure powers down SATA HDD after 5 minutes
19
Need clarification on what IDE hard drive size—2.5 inch versus 3.5 inch—actually means
1
Why are the 44-pin connector in laptop IDE (PATA) drives male while the connector in industrial SSD are 44-pin female?