Now that iTunes 11 is out I decided to try it out. I love 90% of it, but there's one feature I can't seem to figure out that's really a pain.

I love the new "Next Up" feature, and how I can add a bunch of selected songs at once. But how can I shuffle the order of those songs?

Alternatively, if there is a way to shuffle the "Next Up" queue, that would be great as well.

For example, in the below screenshot, I want to play all of my "Castlevania" songs at once, but shuffled. How can I accomplish this?

(Also, I'm on Windows 7 if that matters) 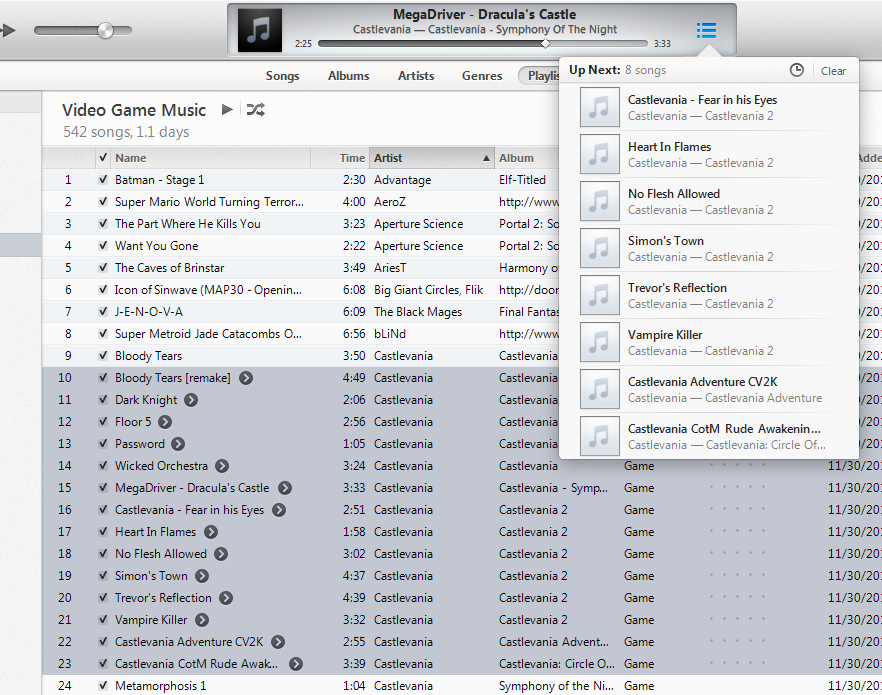 This isn't a perfect solution (I'm still investigating), but if you want to add a playlist to Up Next in random order, hold down the OPT key, then click on the Random Play button.

This will give you a popup telling you that you're about to add x number of songs to Up Next, and ask if you want to clear the ones already there. Click Don't Clear, and the playlist will be added to Up Next in random order.

The only problem that I still have to work out is that it adds to the beginning of Up Next (as if you'd selected Play Next) instead of the end, as per usual.

This isn't an answer to your specific problem -- it's another way to approach itunes that may be of help.

I tend to have long playlists, on the basis that I want to leave my phone in my pocket while working. (I'm a tree farmer = endless hours of transplanting and weeding. my iPhone keeps me at least near the borders of sanity) If I do something once, I figure I will want that list again later.

The computer version has extensive controls in smart playlists, and they update live.

I use this a lot, and have many lists like "Christmas 3 star" where 'genre = christmas, and rating greater than **.

A list called "On trial" where rating = no stars, and play count < 6, limit to 50 songs. At the end of a cycle of this I can go through and give some of them ratings. As I do so they vanish from that list. 1* means it's destined for the scrap heap. 3 * will usually put it on one of my lists based on genre.

You can make smart lists based on words in your notes. So, for example, if Bach's "Jesu, Joy of Man's desire" is both classical and christmas, you can leave it's genre as classical, but add the word Christmas to the notes. Then modify your smart list to add the condition "or notes contains 'christmas' (Hold option down when clicking + to make nested rules. I hate hidden controls....)

A song can be on multiple lists without taking up extra space. So for example, I have a Simon & Garfunkle 3* list, and I have a Folk 4 * list. Bridge over troubled water would be on both lists, but stored only once.

In addition, there are rafts of itunes applescripts for manipulating your library, moving meta data, redoing artists to standard formats, etc.

I got hung up on this exact same thing! Here's how I solved it.

I think it's best to think of "Next Up" as more informative, and use Playlists for managing your music. To do what you want, take the following steps.

This will add all of the songs randomly to "up next".

The problem is in how certain people have become accustomed to using music players, myself included.

Traditionally, when you tell the program (Windows Media Player, Winamp, iTunes pre-11) to play an artist, it makes a "Now Playing" playlist and plays it. So we expect the app to play whatever we add to that list in random order. iTunes 11, on the other hand, does not add the tracks to that playlist. It instead makes another playlist called "Play Next" and gives it a higher priority than the Now Playing list. The only time tracks are randomized, are at the initial selection and addition to the Now Playing list. But they are never re-randomized and the tracks in "Play Next" also cannot be randomized.

At least, that's how I understand it. So, like timshutes said, the answer is to adapt to the queuing methods. I've made a playlist called "Listening" I add whatever I'm going to listen to, and then click the Randomize button next to the playlist title. It's different, but still pretty effective.

Shuffling Up Next doesn't make sense. The point of Up Next is to let the user know what song is playing next.

You can select your artist then under Artists and double click it. Then simply enable shuffle in the control bar at the top.

Not the answer you're looking for? Browse other questions tagged itunes or ask your own question.