Windows 7 side Taskbar: how to have multiple icon columns? 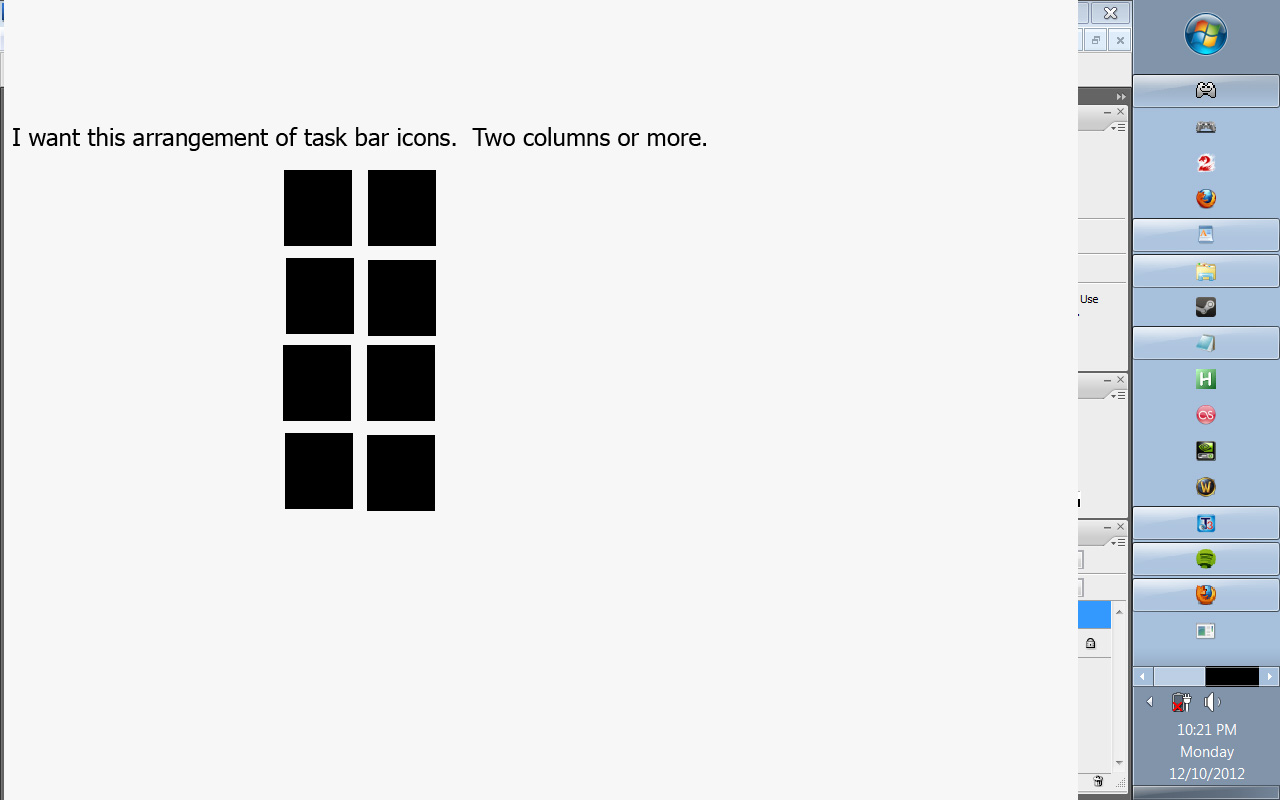 I attached a picture of what I mean. In the screenshots, you can see that my taskbar program icons are arranged in a single column. I want to be able to have multiple columns. This would mean arranging the icons into squares and have them be placed side by side, as well as above and below one another.

This can be accomplished with taskbar being on the bottom of the screen, however, I require this arrangement when I have my taskbar on the side of my screen. Currently if I expand the taskbar horizontally, it only stretches out the icons horizontally rather than turn them into small squares to make room for side by side and placement of icons.

Additional icons that I add to my current taskbar are only accessible by using the horizontal scroll bar that appears at the bottom of the taskbar when there is no more space to accommodate any more icons.

Okay - I kind of found a way to do this, but it does not work with the taskbar vertical (or I haven't got it to work yet, pretty sure it won't anyways with this method).

A while back I wanted to get my icons centered like a Macs, so I followed this tutorial. It works perfect, and your taskbar stays centered that way (minus when you open new windows, they show up to the right of center). Your taskar should look similar to this:

After you have finished that tutorial, instead of locking the taskbar, drag it up one more space so it is two units high. After that, take the little scroll thing on the notification area side and drag that over until your icons are stacked like you want them, similar to this

Alternatively, you could add another folder on the other side of your icons and use that to adjust the stacking of the icons instead of the notification area, incase you like it in a certain way.

Now, if you want a vertical taskbar with programs or files, first unlock the taskbar and drag it to the side of the screen you would like for it to be on. Second, create some folders, that contain the items that you want to be stacked on the bar. For example, I just used Folder and then duplicated it to get Folder2 (that's why the two columns match) - unfortunately, I haven't found out how to make the taskbar icons multi layered yet (You can put an application in the folder, and it will launch, but it will then show up as the last icon in the task bar, and won't actually be a taskbar icon - I hope that makes sense.) I'll post back here if I can find a way to fix that - but anyways, this is what mine looked like.

It's not possible to do so in Windows 7.

I've searched a lot today and cannot find a solution for this question directly. Maybe it's impossible to have multiple columns of running application on win7 vertical taskbar. But there are several workarounds here; maybe one of them will be suitable for you.

Not the answer you're looking for? Browse other questions tagged windows-7 windows taskbar or ask your own question.

2
Have a toolbar docked independently from the taskbar in Windows 7
21
Windows 7 taskbar as sidebar, minimum width fixed
12
In Windows 7 Ultimate, how do I enable multiple rows of icons in the taskbar?
5
How do we set the taskbar's "rectangle area" (width and height)?
3
Replace Windows 7 explorer and superbar by XP explorer/taskbar
15
Can I set Windows default second-monitor behaviour to "Extend these displays"?
1
How to get a thin side pinned taskbar with small icons
1
Laptop resolution gets slightly altered when extending desktop upwards
3
How can I split the windows taskbar into two parts?