Long story short : I messed up my GPT and went on to try to fix it without asking anyone, just searching around. Didn't turn out too well.

Right now all I'm concerned about is a 500GB that I formatted as exFat partition with some important files. But on my journey to fix, I may have used the 'fdisk' command on a GParted Live CD I have (couldn't get on any OS) and switched it to ext2. Now I can't get access to it, doesn't show up on Windows or Mac. Only on the partition table as ext2.

I have got access to most of my files through recovery softwares but they cannot recover with the originial directory or file names, which would be a pain to fix.

I want to know if there is a way to change back the file system to exFat without having to format it. 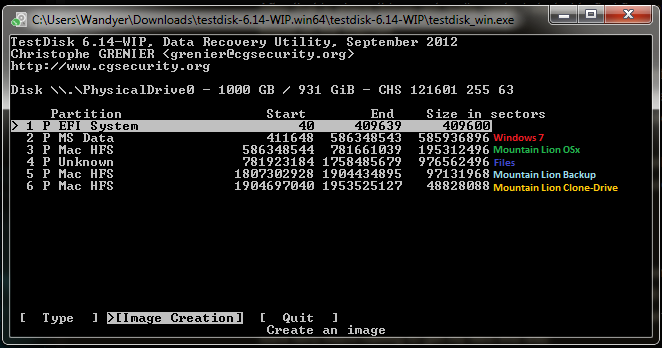 filesystems filesystem-corruption exfat
Share
Improve this question
edited May 25 '15 at 9:57

"change back the file system to exFat without having to format it" ... actually, you formated it to ext2. So there is a good chance, that the old "underlying" exFAT is fairly broken, even after a good recovery.

Try and have a look at http://www.cgsecurity.org/wiki/TestDisk

Best after trying is TestDisk 6.13 to save SD card that became RAW after Windows 7 crashed whilst moving files from the SD to HDD. After reboot the SD was RAW. I took the chance after trying many programs without success to WRITE the partition back to the SD. Steps are in website http://www.cgsecurity.org/wiki/TestDisk_Step_By_Step Better than initializing the disk again, since the folder structure could be found.

Active Partition Recovery - showed the disk structure with DCIM and the folders in it and the files in the folders but the FREE version would not let me check any video bigger than 10MB and those smaller did not work. It did not allow any saving to another drive either because the SD card was RAW.

Aidfile Recovery took a long time to come up with directory structure without any progress indication. Looking into the most important folders showed nothing.

Puran File Recovery found 694 files and could list by type of jpg or mp4. The mp4s played video BUT no sound.

TestDISK was the BEST and took least time to Anaylse, finding exFAT structure, then writing to the SD the Partition which restored everything.

Corrupt exFAT partitions can currently only be repaired under Windows. It can be done by running chkdsk <partition letter>: /r on the exFAT partition you want to repair.

Not the answer you're looking for? Browse other questions tagged filesystems filesystem-corruption exfat or ask your own question.