I have been told to accept one error with Memtest86+

Bought a new computer back in August with 4x4 GB RAM. Had problems with the RAM. They sent me four new sticks, which also generated errors. Singled out four sticks (from the eight I now had) that didn't generate any errors. Discovered by coincident a new RAM error last week (this time no BSOD). Contacted the company. According to them there have been issues with a bad stock from last summer so I got two tested 8 GB sticks sent to me. Been running Memtest86+ over the weekend. After 20 hours I got an error (see attached photo). The test has now been running for 37 hours but so far only this one error. I contacted the company where I bought the computer. They wrote back:

I wouldn't worry about hat one fail.

We have had similar situations here whereby it passes numerous times but then fails once. We think it's an issue with memtest, after all memory is faulty or it isn't so you can't really have it pass a few times, fail the next time around and then pass again!

Please trust me on this and continue with the memory we sent you and if your problems continue we'll look at getting it replaced again.

I gather from other forum posts that many people do not accept a single error. What could this single error signify, faulty RAM or a glitch in the MEMTEST program (or other)?

Update: From the helpful comments below I conclude that an occasional (and rare) "random" error could occur and be acceptable, but repeated errors at the same address would indicate malfunction. Memtest has now run for 45 hours and I still have only one error. For everyone's information, I will keep running the test. In less than two days I am going away for a month. I will most likely leave Memtest running. As I do not have a UPS there is a risk that a power outage will ruin the experiment. The computer is a desktop so I cannot bring it with me (which would curiously have exposed it to more cosmic rays as I will be flying ;)). 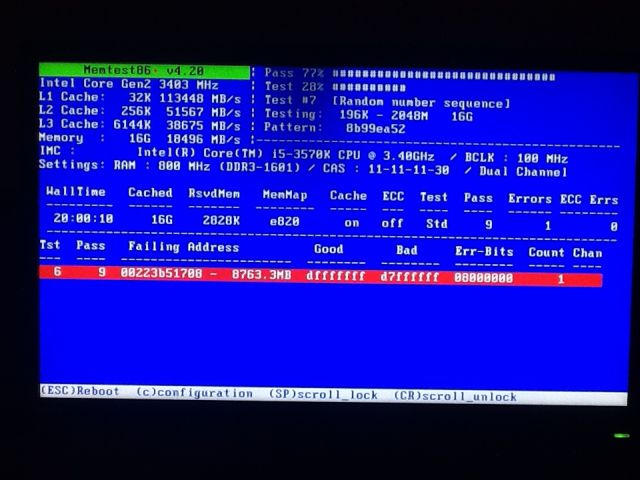 Straight from the Memtest86 author. I would push them to replace it. There should really be no errors at all.

If you have a relatively small number of failing addresses and only one or two bits in error you can be certain that the errors are valid. Also intermittent errors are without exception valid. Frequently memory vendors question if Memtest86 supports their particular memory type or a chipset. Memtest86 is designed to work with all memory types and all chipsets.

All valid memory errors should be corrected. It is possible that a particular error will never show up in normal operation. However, operating with marginal memory is risky and can result in data loss and even disk corruption. Even if there is no overt indication of problems you cannot assume that your system is unaffected. Sometimes intermittent errors can cause problems that do not show up for a long time. You can be sure that Murphy will get you if you know about a memory error and ignore it.

It looks like only a single bit is being corrupted (i.e. not set to logic 1 when expected) at that address. If you can reproduce the error, the RAM is faulty. Even a reproducable 1-bit error is still an error, and could cause problems when using the computer.

Properly working memory should *never** have any errors, as a computer expects (and is why they crash when you have bad memory, as a safeguard; you can't reliably run a machine with bad memory, as the computer may execute corrupted instructions or provide/store corrupted data).

* over a long enough timespan, it's possible for DRAM bits to get corrupted from external sources like background radiation; the event is usually so rare most computers run Memtest for weeks without error. Also see the Stack Overflow question, "Cosmic Rays: what is the probability they will affect a program?".

2
What precautions should I take once defective RAM has been replaced?
0
I got a 64195 error in memtest. What should I do?

3
memtest86+ error explosion, and then nothing
3
Replacement RAM faulty or something more sinister?
70
How do I interpret the statistics of a memtest run?
0
memtest86+ on 4x4gb corsair 1600mhz vengeance dl9 lp
0
Memtest throws same error after replacing memory module. MB issue?
20
RAM tests inconsistently - what is the most likely culprit? (i.e. what should I spend money on replacing)
0
Memtest86 error for all rams in all slots