using “runas” with “Administrator” account versus other admin accounts

If I run the following commands:

The first one opens up a new cmd.exe as "testadmin", but it's not truly running in Administrator mode, i.e. I get "Access denied" if I try to write to C:\Windows.

The second window opens up a new cmd.exe as "Administrator", but it's running in true Administrator mode. I can successfully write to any folder on my computer.

The name of the first window is "cmd.exe (running as [ComputerName]\testadmin)"

The name of the second window is "Administrator: cmd.exe (running as [ComputerName]\Administrator)"

If both accounts have admin privileges, why is there a difference in behavior here? I hate that I can't open a window from the command line as testadmin in true Administrator mode... it's really annoying.

I am assuming you are referring to a Windows 7 OS or similar. The reason you are seeing the difference between the two user accounts is because a while back when vista came out Microsoft changed their permission policies a little. Unlike in XP when you created an Admin account it had all the rights the usual Administrator account would posses. Now in Vista and Windows 7 you are a pseudo admin unless you are logged in as the actual Administrator. In most cases you can run the command prompt by right clicking the cmd.exe program and choosing to run as Administrator to get the results you want, however there are times you will need to log in to the actual Administrator account to perform your tasks. The main reason this was done was to prevent viruses from doing their nasty work and a machine.

I have seen certain software's require an install or uninstall directly from the "Administrator" account and no other, otherwise they would not work. I hope this sheds a little light on the situation.

But in you particular situation, its seems the the testadmin runas is not executed with elevated priviledges. See if this helps.

It is really annoying because you want something to "run as" quickly as Administrator rather than every time doing right click and select "run as administrator" etc. 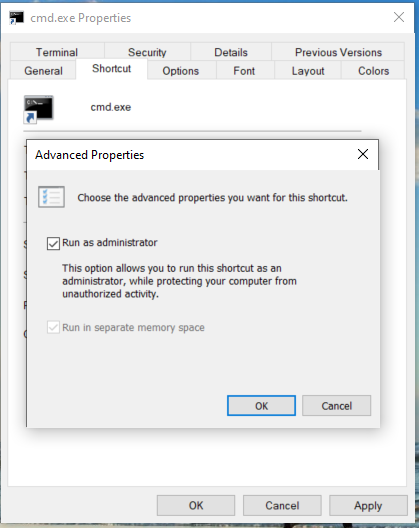 Now you can run this shortcut quickly and it will run your intended program as administrator as you expected.

Not the answer you're looking for? Browse other questions tagged command-line windows-8 administrator or ask your own question.