I know that Windows XP 32-bit can be configured, through PAE, to support more than 3.5 GB of RAM. Is there a good tutorial to do this with Windows 7 32-bit?

As to why I don't simply use 64-bit Windows 7: The software for my Internet connection (cell phone-as-modem) will only work in 32-bit environments.

A few years ago, a group of programmers have released a kernel patch for Windows 7 to allow the usage of more than 4 GB of RAM under Windows 7. Recently, due to some virus scanners detecting the patch as a false positive, the download was removed from the website. Fortunately, I have saved a copy of the patch (which uses the RTM Windows 7 kernel), and uploaded it to my website here (see option #1 when I discuss the two methods to patch your Windows kernel). Furthermore, the authors have posted instructions on how to patch your kernel manually.

Even if you have Windows 7 SP1 (Build 7601), you can install the patch which contains kernel 7600. This is because your default kernel is not modified; a new one is copied to your system folder, and an additional boot menu option is added to boot Windows with the new, patched kernel instead of the older one. While I haven't found any problems running Windows 7 SP1 with the older kernel, if you do wish to use build 7601 of ntkrnlpa.exe, you need to manually patch your kernel (see the link above).

The patch basically modifies the Windows 7 Kernel to be more like the Windows Server 2003 Datacenter Edition, which is compatible with up to 8 GB of RAM under 32-bit mode. This allows you to extend the PAE well into 8 GB of RAM under Windows 7 32-bit. For more information about why Microsoft implemented this technical limitation, see Licensed Memory in 32-Bit Windows Vista (requires JavaScript to be allowed from www.geoffchappell.com).

As mentioned above, note that individual processes will still be limited to 4 GB even if the system can access more... Although if you had 8 GB of RAM, then at least you'd still have another 4 GB for other processes ;)

For those interested in the technical aspects, this happens because of memory-mapped input/output (MMIO for short). This allows a CPU to access both peripherals and RAM through the address bus itself. Usually this is done though the higher-order memory addresses to avoid lower-order address conflicts. However, this gave rise to the commonly known 3 GB Memory Barrier in all consumer variants of 32-bit Windows operating systems.

This article at Microsoft's MSDN site shows the memory limits for versions of Windows and Windows 7 32-bit is listed as a 4 GB limit.

You used to be able to use PAE to see more than 4 GB of RAM with Windows XP but this option was disabled in Service Pack 2.

The reason was that most drivers weren't PAE aware and threw their toys out of their pram if they ended up in memory above the 4 GB boundary.

If you use the /PAE switch now on Windows XP you'll make DEP available, but you won't be able to see more than 4 GB of RAM.

This 4 GB limit is still in place for Windows 7 32-bit. If you want to see more than 4 GB of RAM you will have to use a 64-bit version of Windows.

(This option to use PAE to see more than 4 GB of RAM is still available on 32-bit Server versions of Windows which I assume is down to a better quality of drivers expected for the kind of hardware you'd run Windows Server on.)

PAE should be enabled by default - Windows already uses it internally for the DEP/No-Execute feature.

But these instructions might help if Windows is doing its thing again.

Note that individual processes will still be limited to 4 GB even if the system can access more.

According to the MSDN article Physical Address Extension:

If your system can support it, you can use virtualization to allow access to your 32-bit phone drivers.

It would be a slightly more complicated setup but you could set up a virtual machine that made the connection and did internet connection sharing to your host, that way you get the benefits of 64-bit as well as being able to use legacy drivers.

VMware Workstation (commercial), VirtualBox (free, open source), and Windows Virtual PC (free) can all route usb devices directly into your virtual machine. Just install a 32-bit OS (even XP if you wanted), give it a marginal amount of RAM and you can do what you need. I've done this to load legacy applications that didn't support Windows 7 and my brother actually loaded his old Creative webcam (with no 64-bit drivers) and used Skype through his virtual machine.

For people out there who insist on 64 bit usage - there are some things that would not work in 64 bit environments that could benefit a performance gain from a ram disk that COULD access past the 3.25 mark in a 32 bit environment - specifically applications that page often. You could also put the page file within said ramdisk. In addtion, a VM is great, however emulation never really works as great as the real thing -- it all really depends on the application and the way it is implemented. There are still many hardware devices that will not work in a 64 bit world, and need the real time access to make them work well (while there are accelerators that help with real time access, it can still present problems.)

So, while 64 bit is technically superior, 32 bit is a legacy that will take a while go away, and there will be plenty of reason why people would like to access memory through PAE.

DO NOT USE THE PATCH, its simply a german test version of windows, and will muck up youre boot record.

I have just spent an hour downloading easybcd on another machine to fix this.

The question is “How can I enable PAE on Windows 7 (32-bit) to support more than 3.5 GB of RAM” and the answer is type the command prompt “bcdedit /set [{ID}] pae ForceEnable”.

The 2 systems enabled PAE; then, using the procedure indicated in http://www.jensscheffler.de/using-gavotte-ramdisk-in-windows-7 I installed Gavotte Ram disk and recovered 16MB Ram (nothing) on the first system, but recovered the entire 775MB unused for the second one.

I proved 2 facts: 1. The systems preferred the Ram swap file over the one in the hard disk. I saw it moving, growing and shrinking. 2. Benchmark with PC Pitstop (image attached in http://www.pablomolina.net/bench700.png) shows great improvement in system disk speed, and the system runs quite faster. In the bench I compared a 700 MB page file in the Ram disk with a 700MB page file in another partition of the same system drive.!

You need to set the system to clean page file at shutdown with Microsoft kb/314834 procedure.

For me, PAE makes sense on a 32 bit system, and works. I won´t go for the 64 bits system as I use Windows professionally and accumulated 450 programs over years, which will take me months to reinstall.

If you don't want to a patch files, you can use a boot loader. This Bootloader can be installed on the current system or an an USB pen drive. So you can easily test it without effecting your system. 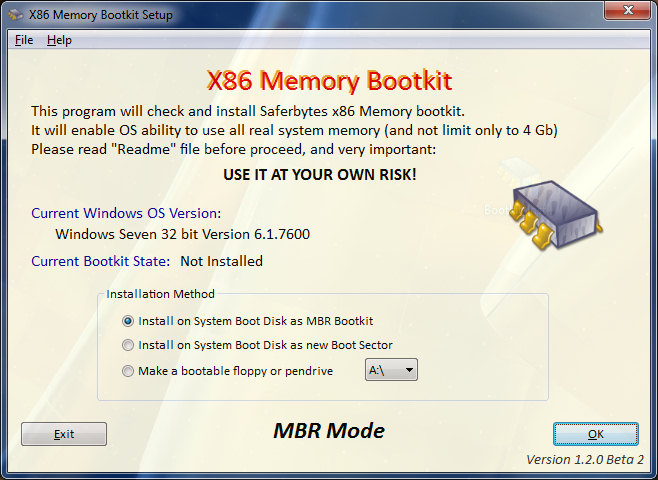 24
Is there way to enable more than 4 GB RAM in 32-bit Windows OS?
8
How much more RAM does Windows 7 use than Windows XP?
4
PAE benefits to threaded programs in a 32-bit Windows system
2
Is the Win7 32-bit kernel still able to use 2 GB with a Large Address Aware program running?
1
Does my processor support PAE?
2
How to know my Ram in Windows 7?