How it happens that Powershell executed with “run” and with pinned icon has different settings?

On my Windows 7, if i run a powershell via "Win+R", "powershell" it will start with white text on black background and settings are affected via [HKEY_CURRENT_USER\Colors]. For example, i can easily change the default "red" color to be less bright:

But if i pin this powershell to Windows 7 superbar and start it by clicking superbar icon, it will display some mad blue-and-white colors that i can't change O_O: 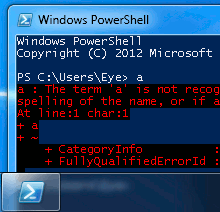 Why such difference and is it any way to configure colors of pinned powershell same way i can configure powrshell that is started via "run" command.

First it looks at the shortcut (.LNK file) you launched. That's what you'll typically see in the start menu, on the desktop, in the taskbar. If you RClick on the shortcut and select Properties, you'll see a bunch of these options there.

For any options that aren't specified in the shortcut (or if you launched the .EXE directly, without a shortcut), Windows will look in the registry.

I couldn't find a comprehensive list of registry keys involved, but here are the ones I know about:

When you open the System menu on a console window you see both "Properties" and "Defaults".

Defaults modifies one of the above registry keys.

The properties apply to the currently open console window and the shortcut that launched it. If you didn't use a shortcut because you opened the .EXE directly, it goes to a special registry key, instead, like:

But that's not all!

Console programs have the ability to modify their own colors. For example, in CMD you can do:

These settings are not persisted in any way.

4
What difference do double quotes make in registry keys?

3
Two sets of colors/properties in powershell/cmd?
8
Is it in any way possible to uninstall PowerShell from Vista?
1
Powershell run programs with arguements as different users
1
Different results between “PowerShell ISE” and “Run with PowerShell”
3
WSL Ubuntu - How to change background-color of directory listing text in CMD/Powershell?
4
Backup Modified PowerShell Console Colors Properties (Windows 10)
0
Prevent powershell properties from resetting after system update
1
Powershell “forgets” accessing UNC path after Start-Process has been executed
0
How can I run psd1 and psm1 files in powershell?