When connecting my Nexus 7 to my Windows 7 computer, it doesn't show up in neither Windows Explorer > My Computer nor Device Manager > Portable Devices.

I did, however, install the Google USB driver, which allows USB debugging for Android development, and that driver shows up under Device Manager > Android Devices 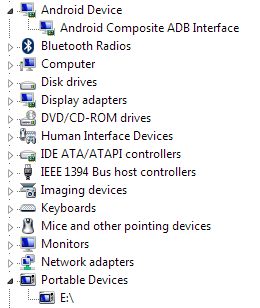 Also, when the Nexus 7 is connected via USB to the Windows 7 Computer, the setting on the device is correctly selected/checked to connect as a media device: Notifications (Swipe down) > USB Computer Connection > Connect as Media Device (MTP)

However, when I connect my Galaxy Nexus phone, it shows up in both Device Manager > Android Devices and Device Manager > Portable Devices, which in turn shows up under Windows Explorer > My Computer allowing me to actually use it as an MTP device. 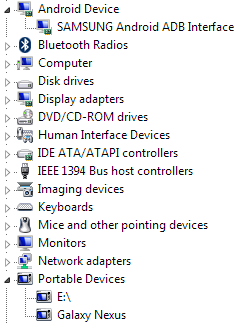 How can I access my Nexus 7 as a media device under Windows 7?

As I posted in this question on Android.SE, I was able to get my MTP mode working again. FYI I don't know how this affects the debugging interface since I haven't checked that out yet, but this should let you access it as a drive.

From that answer (slightly modified based on your images):

What worked for me (on Windows) was:

At this point mine got recognized as a Nexus 7 instead of an Android ADB device and allowed me to transfer files again.

Not the answer you're looking for? Browse other questions tagged windows-7 mtp nexus-7 or ask your own question.

2
Nexus 4 not recognized on Windows 10

2
Nexus 4 MTP not showing on Device Manager
4
How to change default folder template for MTP Device?
1
Install Android USB Driver when device is not shown in device manager
1
How to configure action on plugging in an usb MTP device on windows 8.1
59
Windows 10 is unable to load Android devices as MTP devices
5
Android MTP stopped working on Windows 10
1
Show file dates from MTP device?
1
Adding Media Transfer Protocol Device (MTP Device) support for Windows 10 N
1
MTP device detected under Linux but not under Windows