I have Windows 8 Media Center Edition running on an HTPC and would like to make the Metro icons 'larger' on my 62" 1080i TV. I've found a blog article that discusses how Windows determines pixel density based on resolution, however I do not see a way to change the default assigned values for my resolution via the UI. I know this can be done as I saw a 2012 Build video where they demo'd a large screen touch display and mentioned that you can over-ride the pixel density via the registry, I just don't know what key. Help anyone? 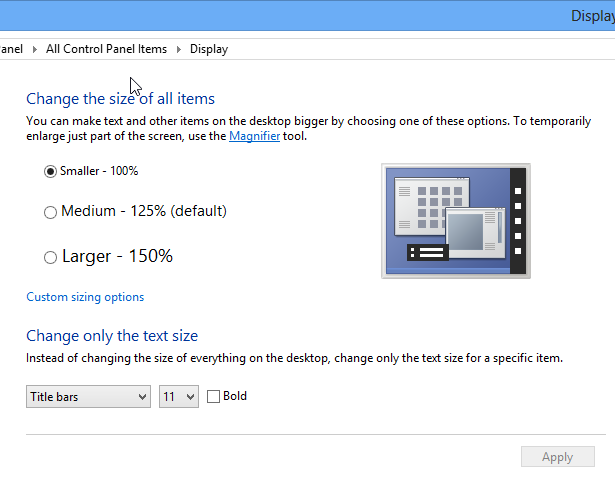 Not the answer you're looking for? Browse other questions tagged windows-8 modern-ui or ask your own question.

1
Can I create a keyboard shortcut/hotkey to a tile in Windows 8 Start Screen?
5
Modern UI app pinned to second screen
3
Adding an RSS feed to the Windows 8 start screen
7
How to add a shutdown tile to the start screen?
2
How to replace unpinned desktop icon on windows 8 metro screen
3
Windows 8 Windows Store (Metro/ModernUI) applications not working (just show 'busy' animation or white screen)
1
Windows 8 Start Screen Tiles Grouping in “All Apps” view