Ask Question
Asked 13 years, 2 months ago
Modified 10 years, 1 month ago
Viewed 15k times
10
As it currently stands, this question is not a good fit for our Q&A format. We expect answers to be supported by facts, references, or expertise, but this question will likely solicit debate, arguments, polling, or extended discussion. If you feel that this question can be improved and possibly reopened, visit the help center for guidance.
Closed 10 years ago.

In a recent article on Australian LifeHacker.com they discussed the following question, I trust the SU group more then the anonymous answers from LifeHacker and I thought I would re-ask it here?

I’m sitting here with my MacBook Pro and a copy of Windows 7, wanting to combine the two into the ultimate blogging machine. But how to do it?

I could go the cheap option of Boot Camp, which only lets me boot one OS at a time, and is free. Or I could spring for a copy of Parallels or VMWare Fusion to do the whole virtual machine thing.

So the question today is which should I choose? Either because you want to know what the process is like, or because you recommend the solution – either one is fine by me.

EDIT: Work is paying too; so don't worry about price affecting your choice!

For the needs described in the article, I'd probably go with VMware Fusion. It does a really nice job of bringing Mac and Windows together, especially with the "Unity View" feature. (Granted, I haven't tried Parallels or VirtualBox, but I have the impression they're not quite as good in this.) So do evaluate it to see if it fulfills your needs well enough - and if it does, I think the price of $79.99 is tolerable.

However, for my own Windows using needs, I'm currently sticking with plain old Boot Camp. That's because Civilization 4 doesn't really work as smoothly under VMware Fusion. I'd guess this is true for other 3D heavy games too. (Now it's much better than before though - although this might be simply because now I'm using a Mac with nVidia GeForce 9400M as opposed to one with integrated Intel GMA X3100.) Booting back and forth between Mac and Windows admittedly is a pain though.

Parallels has massive downsides. I would recommend Fusion (if you want to spend the money) or Virtual Box (which I haven't used but have only heard good things about).

All three can do the mixing desktops thing (called Coherence Mode in Parallels and Unity View in Fusion). In practice the mode is annoying.

Fusion has a great advantage in that the VMs run in the background and the Fusion application merely connects to running VMs. This means you can have VMs run in the background while you log in and out and if the Fusion application crashes (for some reason), the VMs are still running. It also means that you can "disconnect" from a running VM rather than shut it down, which can be very useful.

I also found Fusion to be better at resource management than Parallels.

(Boot Camp can be combined with Fusion or Parallels but unless you need a native Windows, I wouldn't recommend using it or that option.)

I've had much luck with Fusion over Parallels. Across many Macs including a various desktop and laptop configurations, my company has all moved to Fusion (much needed since we have Windows users as well).

Most of us have a BootCamp setup (best for TF2, Civ4 among other things) and set up other VMs to work with on external drives. Best of both worlds. I highly recommend having a simple BootCamp setup for those times when you just really need Windows.

edit-- Almost forgot to add. The only issue I've had with Fusion have been issues with Cisco VPNs. That should be resolved now though.

Even if cost is no issue I like Virtualbox because it's cross-platform. You can run your VM's on almost any other machine/OS, not just macs. I have a development VM that I bring with me on a usb drive together with installation files for virtualbox. I can have my personal environment up and running within minutes on almost any computer.

I can't compare performance with parallels or fusion since I haven't tried them, but virtualbox is good enough for me to completely forget that I'm in a virtual machine when I run it.

Having experienced the very, very slow performance of both VMware and Parallels, I'd probably go with Boot Camp. Granted, the experience isn't very seamless, you have to restart just to get into the other OS, but it offers the best performance possible.

For me, speed is an important factor. I have to wait a few extra seconds for every task I do in the virtualized OS; these seconds eventually add up to a few minutes. In those minutes that I've just wasted for something (anything) to happen, I would have been able to just boot into the other OS and avoid the added frustration.

I use VirtualBox for school jobs, because it's free for sure but also because you have some functions like the integrated virtual machine which 'mix' the desktop of host and virtual machine. 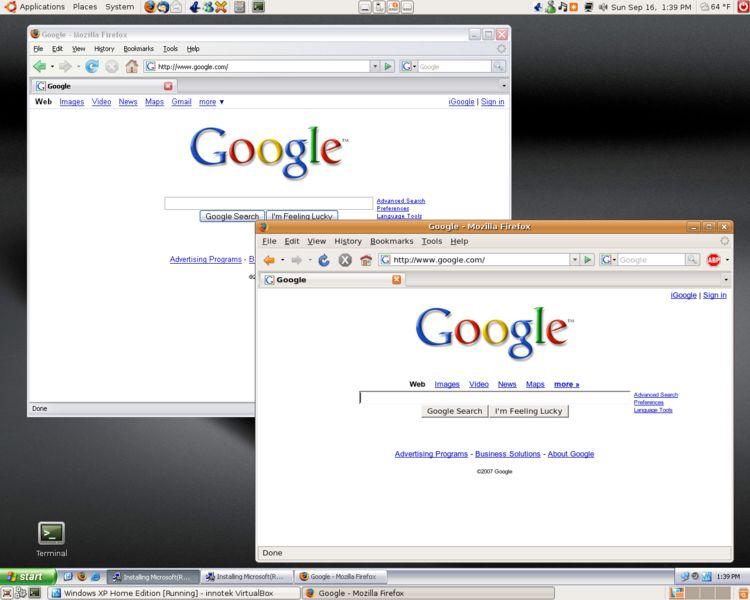 Since VirtualBox is free, do your proof of concept with it and then move to VMware Fusion.

Even though I seem to be the only one: I prefer Parallels.

I use Fusion at work and Parallels at home. And while my work Mac Mini is much faster than my old MacBook, Parallels feels much more fluent and responsive to me. Also I find the interface of Parallels more intuitive.

3
Boot Camp or Virtualization
17
What's better a better VM app: VMWare, Parallels or Virtual PC
2
Virtualization software for a Mac
2
What's the performance impact of a virtual machine NOT running?