I've been using uTorrent for a long period of time, but recently I noticed that when I open uTorrent, I can't make my laptop go to sleep. The screen turns off and etc. but it will be still running and I should hold the power button to shut it down.

I searched about this and only thing I found about it was this and as you can see, no real answers.

I also tried unchecking "Prevent standby if there are active torrents" in settings. Didn't work!

And this is what I get when I use powercfg /requests in cmd:

And it is the same before and after opening uTorrent.

Any solutions would be highly appreciated :) Thanks in advance.

From your comments, it seems that µTorrent has not fully closed when you try to suspend. This is an expected default behavior, since µTorrent has the bt.graceful_shutdown option activated by default. This option, as you can figure:

Graceful shutdown is for when torrents take too long to write, normally µT will close in 10 seconds, with graceful shutdown, it wont close until all the data is saved.

Meaning, that µTorrent hasn't ended writing up all the data to the disk (they are still in the Windows cache) and since you have a Laptop with slower Hard Disk, this could take a while.

You can disable this option going to Preferences > Advanced > bt.graceful_shutdown and set it to false. WARNING: This could provoke that your torrents/data gets corrupted, so it's better to wait until µTorrent finish up.

If you are going to suspend after you finish, why not let µTorrent to do so?

µTorrent has a feature to automagically do actions when all downloads (or downloads/uploads) are finished. One of this (as you can see in the screenshot) is Standby when Downloads Complete, which you might find very useful and secure. 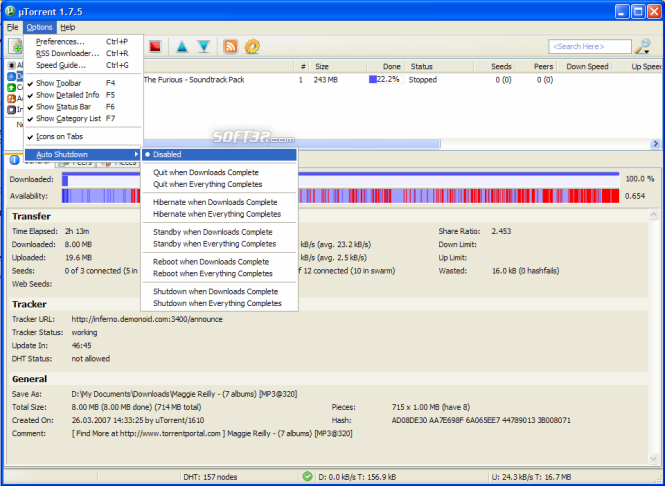 Options -> Preferences -> General -> Prevent standby if there are active torrents

Make sure this is unchecked.

If this wont work,

This may not be entirely what you need: uTorrent 2.x has a scheduler somewhere in the options dialog. One of the options there is "Turn Off". I imagine that could be useful. With any luck, those settings are available in more recent versions uTorrent.

Although I'm uncertain about the next suggestion, you could try disabling settings as indicated in the screen shot. The reason being disc-sync (write, read) calls are a common source of activity that would prevent the OS from sleeping. Setting a higher memory cache size will consume more of your ram, but give you more time between disc access. Also using these settings implies a risk of losing downloaded (but not yet written out to disk) data in the event of uTorrent crashing, being forcibly shut down, if your computer crashes, bla bla bla. 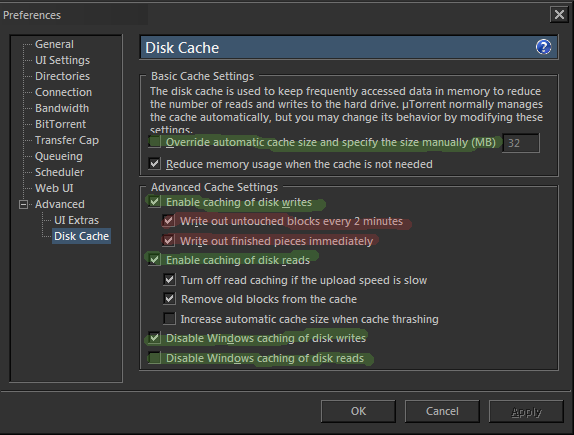 It sounds to me that uTorrent is opening an audio stream and then failing to release it and or keeping it open. I do not know how to stop uTorrent from doing this as it sounds more like a bug to me then anything, but you should be able to ignore your Realtek driver when your computer attempts to sleep.

If you open the command prompt and issue the following command:

You should see "Realtek High Definition Audio" listed under [DRIVER]

At this point an exception is registered for your realtek driver and should thus prevent any sleep related issues.

For those who face a similar issue, but have a different powercfg -lastwake or powercfg /requests response this command can be modified and may help you.

You can override a system, display, or awaymode request issued by any process, driver, or service in windows 7.

Assume that uTorrent itself was indicated as the process that last woke your OS.

Will override any system requests issued by "utorent.exe"

Lets say you want to override all requests by uTorrent:

Replace "utorrent.exe" with any process that may be waking your PC.

Other options can be found with the command powercfg /? This command will prevent your system from waking from any process, driver, or service given the proper command.

in version 3.5.5 there is an option that prevents sleep when there are active torrents. you will find it in Utorrent>general> Prevent sleep for active torrents

I can not be sure that my recipe could help in you case, but it helped in my (after entering in to sleep mode - pc wakes immediately)

Not the answer you're looking for? Browse other questions tagged sleep utorrent or ask your own question.

17
How to tell what is using an audio stream?

1
Does iMovie prevents going to sleep?
0
How to migrate from uTorrent to BitComet
0
Unwanted wakeup from sleep state
5
Surface Pro 2 running Windows 10 will no longer sleep
2
Audio Stream prevents sleep
1
Windows 10 does not wake up from a sleep state
11
How to stop computer from entering sleep under “Critical Battery Trigger Met” misidentification?