Problems opening sharepoint document, checked out, but opening from temp folder instead

Whenever the user clicks on a Word file (.docx) on Sharepoint, he first gets the normal dialog asking whether to open it in read only mode or check it out. 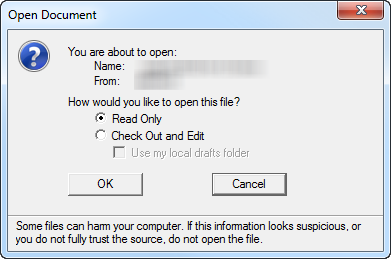 After confirming that he wants it checked out, the dialog closes, but then the normal IE download "dialog" yellow pane shows in the bottom of the window asking whether to open or save the document.

If he clicks on Open, the document is opened from the temp folder, but not linked to Sharepoint, so saving and/or closing it will never upload the changes, nor ask if he wants to check it in so others can use it.

Additionally, when the file opens in Word (from the temp folder), it is flagged as unsafe, and is read only, with a yellow bar at the top with a button for allowing editing. This is a quick indication that everything is not as it should be.

What else should we look at?

This can be caused by a user disabling the Office Document Cache Handler add-on in Internet Explorer, often due to overexcited culling of add-ons thanks to the "Speed up browsing by disabling add-ons" prompt.

To resolve it and re-enable the add-on:

This add-on is what handles SharePoint-Office document caching and integration within IE.

Okay, I really don't have a prescient answer for you, but I have a couple places for you to look. If you provide more detail, I might be able to narrow down my response.

First of all, if the user has a Home edition of Windows, or is on Vista, I'll point to that as being a likely source of problems and throw my hands up in the air (and you'll need someone else to answer).

Here's one thing to try: In Internet Explorer, go to Internet Options, then the Advanced tab. Near the end of the list of Settings, there is one labeled, "Enable Integrated Windows Authentication." Set it to the opposite of what it currently is, restart your computer (you can probably just close IE, but better safe than sorry), and see how things work.

As you might be able to tell from my ideas here and my clarification request, I'm betting that this has something to do with the way the user is authenticating with the SharePoint server.

There may be some resolution in rolling back IE9 to IE8. There seems to be many similar issues with sharepoint and IE9.

Go to Control Panel >Programs>under Programs and Features> view installed updates and scroll down to the bottom of the list and uninstall Windows IE9 and then restart. IE8 should now be present.

Fix idea: Put the Sharepoint site in the user's trusted sites list and ensure that trusted sites are set to the Low security level.

I had a user with the exact same issue. The machine is Windows 7 Pro x64, with IE10, Excel 2010 and SharePoint 2010. She'd click a doc on SharePoint, it would prompt to check it out; but once opened in Excel it would still be read-only and no options to check it out.

This is going to sound crazy, but the issue was being caused by her display resolution being set to medium. I changed it to the default 'smaller', and now she can check in/out docs and it works.

Hope this helps someone out there.

The banner issue solution is below: https://support.microsoft.com/en-us/kb/2661910

The banner shown either before or in yellow is determined by screen res.

Not the answer you're looking for? Browse other questions tagged microsoft-word microsoft-office internet-explorer sharepoint-2010 or ask your own question.

0
Editing Word doc from Sharepoint on Windows 7
0
Click on MS Office document from Sharepoint and will open Office, but not document
0
How to create a new word document from document template in Sharepoint
3
Shortcut to switch MS Office doc from 'read only' to writeable, when already open?
0
Sharepoint 2010 opening non-office documents needs Widows SharePoint Services compatible app
3
Can I stop SharePoint from prompting during file edit?
3
“Insert Hyperlink” very slow for documents in a SharePoint library
0
Opening SharePoint files from Excel's recent file list always locks the file for writing