CPU mysteriously being used by nothing

My gnome-system-monitor applet ALWAYS shows half of the CPU meter busy... most of it by user procs, and some by system too.

Take a look at htop: 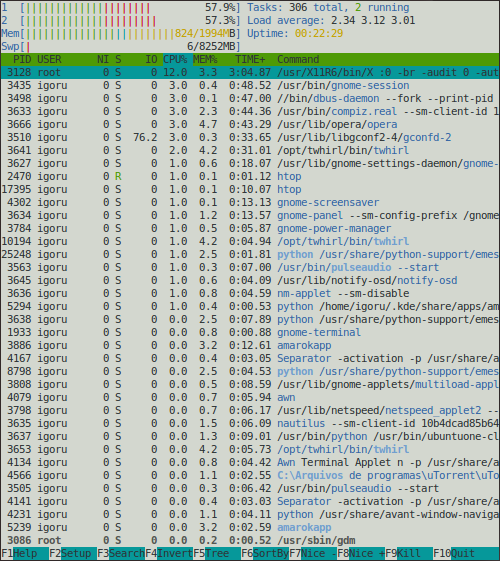 I can't understand why, idle, my CPU is being used like that.
It used to be only shadowy dots in those CPU graphs, not a hole half!

Is there something I can do to further discover this? Or it's just... normal? =S

You also might want to try doing an apt-get install iotop and iotop so you can check if the usage is actually disk I/O. It's a great tool for finding what's slowing down a system with no apparent CPU-intensive processes.

Try using top from the commandline; it gives more detail on how the CPU is being used. In particular, that '76.2' in the IO column for gconf2 may be a clue.

You have a load average of 2-3. That's a lot for what you think is an idle system. Try checking if you have some processes that are permanently (or almost) in state other than S (sleep):

Also look at the output of vmstat ("vmstat 2" for example).

With high load you either have one or more process running that uses CPU, which should show up if you sort your output from "top" (the default sorting is often the one you want), or it's bursty in that the load is taken by short-lived processes. Those are harder to find.

Try killing off services and see when/if the cpu use goes down. Start with shutting down X and going to console, then shut down service after service with commands like /etc/init.d/cron stop.

That gconfd in your screenshot sticks out a bit though.

Not the answer you're looking for? Browse other questions tagged ubuntu cpu cpu-usage or ask your own question.

3
Why would my computer all of sudden reset clock, show new boot screen, and run fans loud?
0
Spontaneous reboots of system
3
Windows 10 keeps showing 100% of CPU usage no matter what
3
Cannot get rid of Win 10 'system and compressed memory' high CPU, any suggestion?
0
Computer crashes while playing games. CPU seems to go above rated GHz
1
CPU threads not being used
0
System process causes 10% CPU usage when doing nothing