In Windows 7, I'm looking for a quick way to see if a certain application is running or not. (The specifics of the application don't matter - it could be Notepad or Internet Explorer, for example.)

I have the application icon pinned to my task bar, so one solution would be if the colour of the icon changed when the application was running. However, there may be other ways - any noticeable change to the Windows GUI which doesn't require clicking or typing will do.

Do you have any suggestions?

This is built in to Windows 7. There should be a border around the icon.

Internet Explorer pinned and not running:

This can be achieved with a short AutoIt script. It requires that you install the AutoIt software.

The details of such a script is found in the official documentation at http://www.autoitscript.com/autoit3/docs/functions/ProcessExists.htm.

The most reliable way is to check if the process is running. You can use tasklist or pslist (direct link) from SysInternals.

Procmon from SysInternals will tell you it is running and if you need to learn more about the application, it can thoroughly illustrate the files and additional threads it is spawning.

If you have WMI enabled (should be by default).

I would suggest using Sysinternals BGinfo

You can call BGinfo using task scheduler every X seconds and update your desktop background with custom defined WMI query: 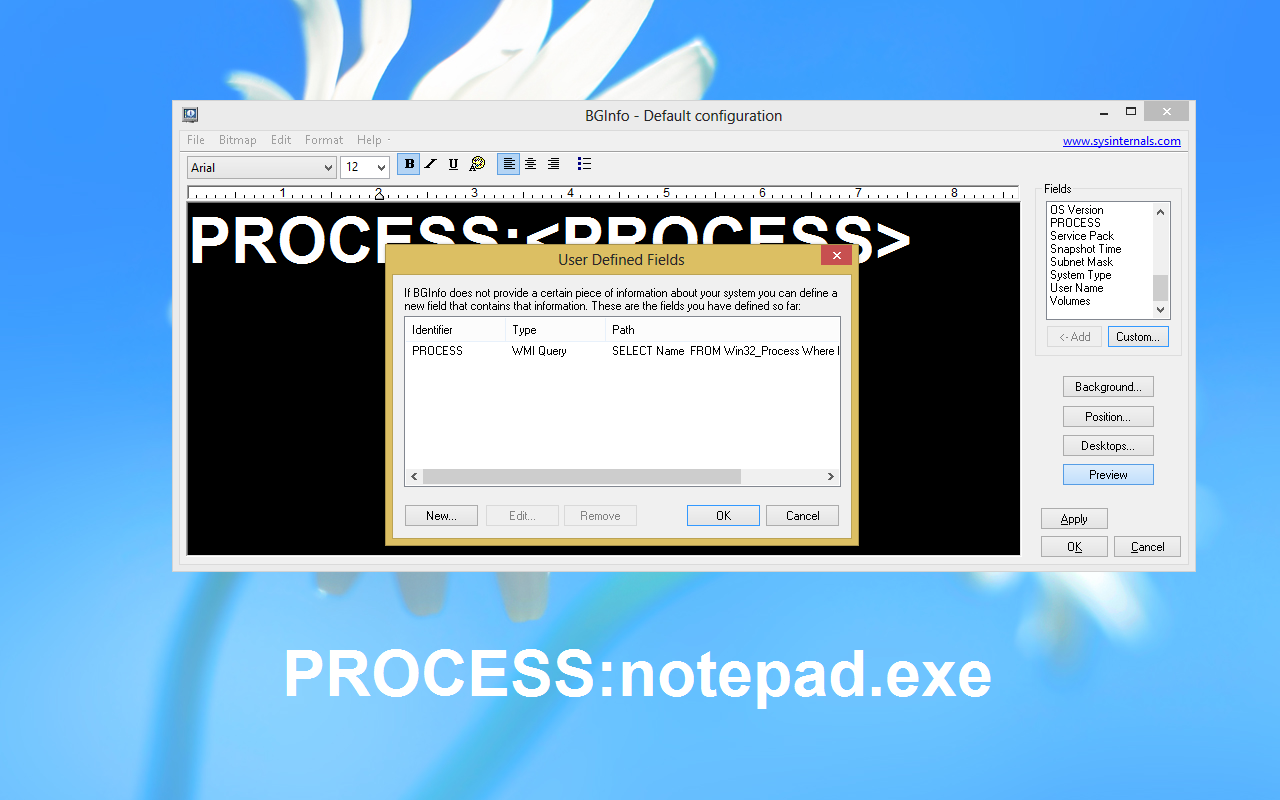 I knocked up this PowerShell script. It checks if a process assigned to $Victim is in the list returned by Get-Process. Much of the rest of the script is concerned with creating the Message Box payload.

Start-Sleep is just to give you breathing space between tests.

It is an original idea from an amateur script writer, thus could benefit from improvements, both in scripting and in the logic.

Ctrl+Shift+Esc should bring up Task Manager. The first tab on the left shows your applications, the next tab shows your running processes. If you want to see all running processes, click the "Show processes from all users" button. There's no need to install anything from Sysinternals if I read your question right.

0
Start a service (or services) with a double-click without the UAC prompt
0
Program windows sometimes do not appear when program is run on Windows 7 64-bit
3
Need a simple APP or Software or Tool for auto typing
6
Adding %USERPROFILE% to a command in the Windows registry
0
How can I instruct Google Talk to remain in the taskbar when closed?
0
Windows 7: Application Windows Fail to Appear Occasionally
1
PSExec to open interactive program with no user logged in