How do I merge two tables in Excel that have identical columns?

In Excel, I have a spreadsheet that pulls data from a SQL Database into a table and then generates a report based on that data. Unfortunately, the data in this SQL database is incomplete and I want to include additional rows in the result set that are entered manually into the spreadsheet.

As much as I would like to, I can't just manually insert these extra rows into the table because they would get deleted whenever Excel pulls new data from the SQL Database. So instead, I'm considering creating a separate table with the same column headings on a new sheet and entering the data there, and then creating a third table on another sheet that somehow combines the rows from the table that pulls data from SQL and the table where I enter data manually. How can I accomplish this? (Or alternately, is there a better way of doing this that I'm somehow missing?)

Create a dynamic named range SQLDB for the SQL data in Sheet1 using the formula:

Both of these named ranges assume that variable names are entered in row 1 of each of the two sheets.

Enter the variable names in row 1 of Sheet3 (beginning in cell A1).

Enter the following formula In cell A2 of Sheet3:

Copy the formula across the variable name columns, and then down the rows until the results of the formulas are all dashes ("-").

It is possible as a next step to create a Pivot Table in another sheet for analysis and organization.

Again the first step would be to create a dynamic named range, say, RESULTRNG, inserting the following formula in the Name Manager input box for the named range:

Then create a Pivot Table in a new sheet, setting RESULTRNG as the table you want to analyze. This will filter out any trailing dashes from the formula table in Sheet3.

I found a way of doing it. This solution is a little tricky and it requires both tables to have their own separate sheets (with nothing else on them), but other than that it does almost exactly what I want. (There also seems to be a lot of potential here for doing more complex operations such as joins.)

Go to the data tab on the ribbon, click "From Other Sources", and "From Microsoft Query". Then click Excel Files, select the file that you are currently working in and click okay. Then, hit cancel and when promoted on whether you want to continue editing in Microsoft Query, hit "Yes". From here you can click the SQL button and write a custom SQL Query on any sheet in the spreadsheet. In my case:

Note: For me, this method stops working after I close the file and the open it again. I'm posting it here anyway though in case it's just a problem with my computer or someone else can get it to work.

If you are interested in a VBA solution, I was able to get the following to work: 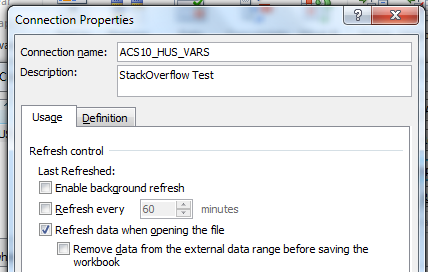 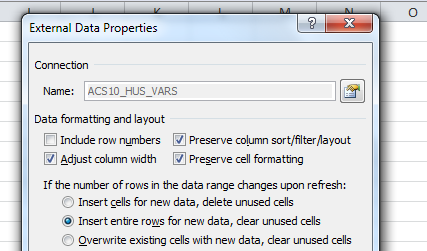 Here's a version of @chuff's "Pure Excel" solution that is designed specifically to work with tables. (I.E. The two data sources you want to merge are tables.)

The main difference between this method and the one chuff posted in his answer is that you don't need to define named ranges for the two data sets you are merging, since they are tables and already have their own named range. So go ahead and name your first table Table1, and your second table Table2.

Now, create a new table in the top-left corner of a new sheet and give it the same column names as the other two tables. Then enter the following formula in cell A2 of the sheet you just created:

Next, copy this formula across the all the table columns, and then down the rows until the results of the formulas are all dashes ("-"). Note: Sorting this new table won't do anything, since the contents of each cell are actually identical (they all contain the same formula).

If columns in the merged table display 0's when they should be displaying a blank cell, you can wrap the formula in that column with the substitute function, like this:

If you want to create a pivot table that uses data from this new table, you'll have to create a named range. First, name the table Table3. Now, go to the formulas tab and click "Define Name". Give the reference a name, enter the following equation for its value ("Refers to"):

You can then use this named reference as the range for your Pivot Table.

If you just want a result on a one-time basis, there is a web site that will merge two tables for you: https://office-tools.online/table/merge/

You paste the tables into the web page and select the relevant parameters. Here's a screenshot of the built-in example that indicates how to use it: 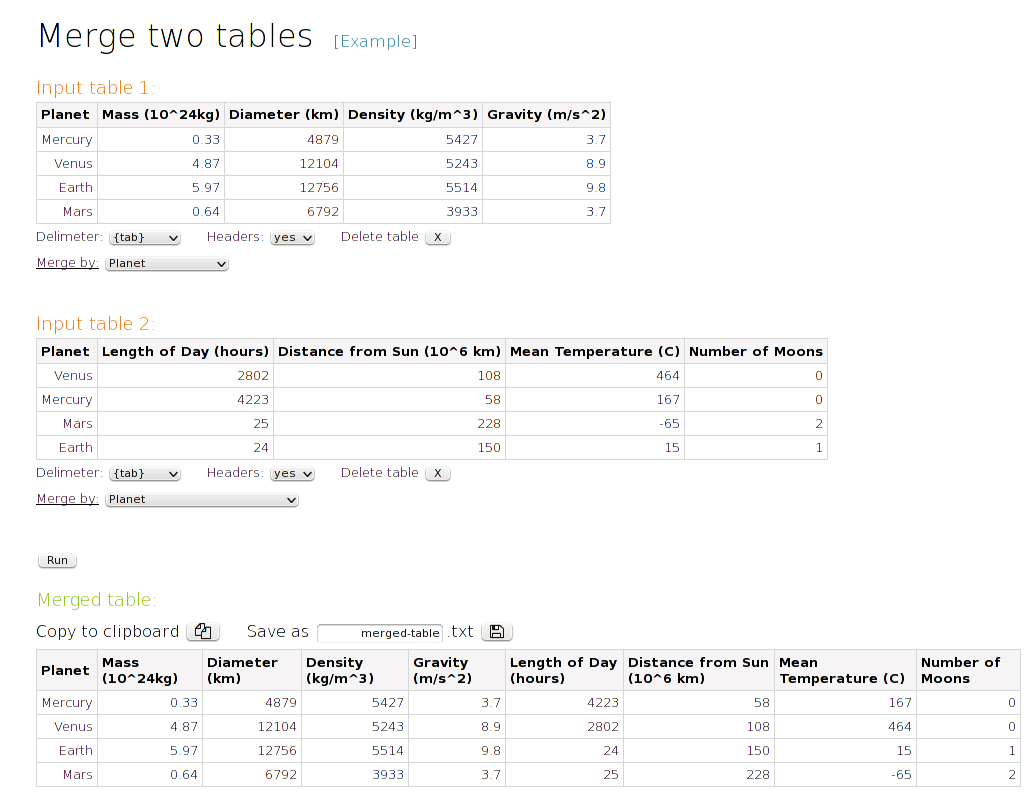 1
Excel 2010: Combine Two Tables in Pivot Table
2
How do I align two tables based on a unique column with Excel?
-1
I need a way to combine identical data from many tables into one pivot table
2
Merging tables in Excel
1
Merge tables with each table a column in the new table, merging rows

2
Table data entry - How to always have a blank row at the end of an Excel table
15
Copy/Pasting data from SQL Server to Excel splits up text into multiple columns?
1
Find column where sum is meeting condition?
1
Excel 2010 Pivot Table: How can I expand/collapse a subset of records beneath a distinct set of records?
1
How to keep cell references when querytable columns change
0
Merge multiple columns into one
0
How do I merge data from two Excel sheets that have only partially same data?