Why is my USB mouse disconnecting and reconnecting randomly and often?

My mouse will reconnect/disconnect (will even hear the sounds from Windows), and the light on the bottom of the mouse will turn off/turn on as it starts working again.

It really sucks to be playing a game (and happens on desktop as well) for the mouse to just die out for a few seconds and come back. Sometimes it will not happen for days and other times it will do it two or more times within 15 seconds.

Nothing else seems to reconnect like this, my USB keyboard has never once cut out like the mouse does and neither have any of the other devices I have connected (webcam, USB hub, various devices sometimes connected through USB cables, and IR receiver for windows Media Center remote). I have disconnected all USB devices except for my keyboard and mouse and the problem still occurs.

I guess it could be something wrong with my motherboard but since no other devices behave similarly I'm just hoping that it is some kind of driver conflict. Installing Logitech's drivers has had no effect. It seemed at first that if I go to Device Manager and uninstall HID-compliant mouse (that and Logitech mx518 are listed) that would fix it, but it doesn't seem to work anymore or at least not every time (it keeps re-installing).

I have googled "USB mouse disconnects and reconnects", and it seems to be fairly common but none of those were resolved.

To stick some easy steps:

I read that maybe it is an IRQ conflict, and I tried to look into that but did not really know what was going on, but didn't see anything obviously wrong.

If you're experiencing mouse lockups or failures, it may be because your computer is automatically turning off the power to a USB Root Hub.

If this does not work, do the same for the USB Input Device - uncheck the box "allow the computer to turn off this device to save power. (this worked for me) and stopped the annoying way the mouse would go in and out.

Supposedly this can be caused by registry corruption:

That page recommends a system restore or uninstalling the USB device in Device Manager.

In addition to uninstalling the device itself, you can uninstall all the USB root hubs on your machine, and they will be reinstalled after a reboot, as recommended in this HP article USB devices are detected by Windows but are not working properly: 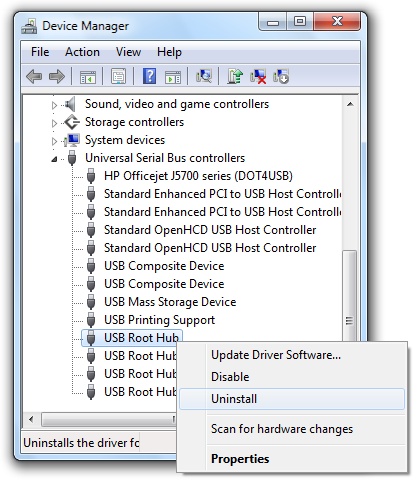 You can also uninstall all previous instances of the device (and the root hubs) using a tool like USBDeview. It will show you all devices that have ever been installed, even if they aren't currently plugged in, and you can uninstall them from there, so the "detected new hardware" thing will pop up the next time you plug it in. Sort them by vendor ID, select everything related to that product, right click, and uninstall them all.

I'm not sure if the registry corruption is truly the cause, and I'm not sure if this actually fixes it, but it's worth a try. It seems to be working for my most recent experience with this problem.

From what you describe, nothing immediately comes to mind what the cause of the issue you are observing might be.

A few things to keep in mind:

Typically, I would start with a minimum system setup to rule out the variables (1 CPU, 1 CPU Fan, 1 DIMM, 1 Video Card, 1 Hard Drive, 1 Power Supply, etc.). It is best if you have all "known good" components. Then, try to rule out subsystems. Unfortunately, at home you likely have limited tools and resources, so you have to improvise smartly.

Rule out the OS/drivers (easy if you have spare CD's & hard drives):

Rule out the keyboard and mouse:

Rule out the motherboard power rails:

This answer might now solve your problem, but hopefully it'll move you towards finding the cause of the issue.

You can try to uninstall the mouse completely and let Windows re-install it.

This will make your mouse stop working, so use your keyboard to restart your computer. When it loads, your mouse should be working fine.

If it happens with several mice and several USB interfaces, that leaves software. Are you using the Windows default HID driver for mice? You might try installing the latest software from Microsoft: http://www.microsoft.com/hardware/windows7/support.mspx

This is a regular USB mouse, not a wireless one, right?

How does it behave after a clean boot? http://support.microsoft.com/kb/929135

After the first one did that that I called Logitech support and they asked me the problem, asked for the serial number and then shipped me a new one free of charge. This happened again with my second one, but I did same thing and they shipped me a new 1800 DPI MX518. This is the mouse I am using now for over two years and it's been great.

I know I applied a lot of pressure to the cord of my mouse, and that could be the reason for it.

Here is Logitech's support website, and if your mouse is still under warranty, I highly recommend Logitech support.

In my case, the problem became less severe when I started using a different USB slot.