Yesterday, I have downloaded and installed Windows 8 Professional, after downloading it (legally) and burning it to a DVD, on my 3-year-old Dell Studio 1555 (Intel Core Duo 2x2.4 GHz, 4 GB RAM, Toshiba MK2555GSX hard disk drive).

The installation failed two or three times, each time differently (error codes, for example 0xc000021a, with an infinite boot loop), but finally I completely formatted the hard drive and installed. Seemingly, everything was OK.

However, after booting successfully, the OS is extremely slow. When I open the task manager, it shows that the HDD is at 100% - however, no application or background process or Windows process can be made responsible. I searched the Internet and found that Windows might try to "index" the hard drive, but I did't find a process that isn't also on my second computer, which still uses the Release Preview (restarting every two hours). Also, the startup is empty, and HD Tune and HDD Health show that the drive health is OK, even though I don't know how reliable these two programs are.

I looked for diagnose software from Toshiba, but they only offer tools for "Fujitsu branded Toshiba devices"; I tried it out, and it did not work on my hard drive.

Does this sound like a hard drive failure? The laptop is 3.5-years-old, has been carried around sometimes roughly and was used (and on) most of the time. However, it would have failed exactly the night before installing Windows 8 Profesional, which seems - unlikely.

If this is a software error - then what did I do wrong if this occurs from the moment of installation (even the personalization at the end of installation took half an hour)? How can I fix this? 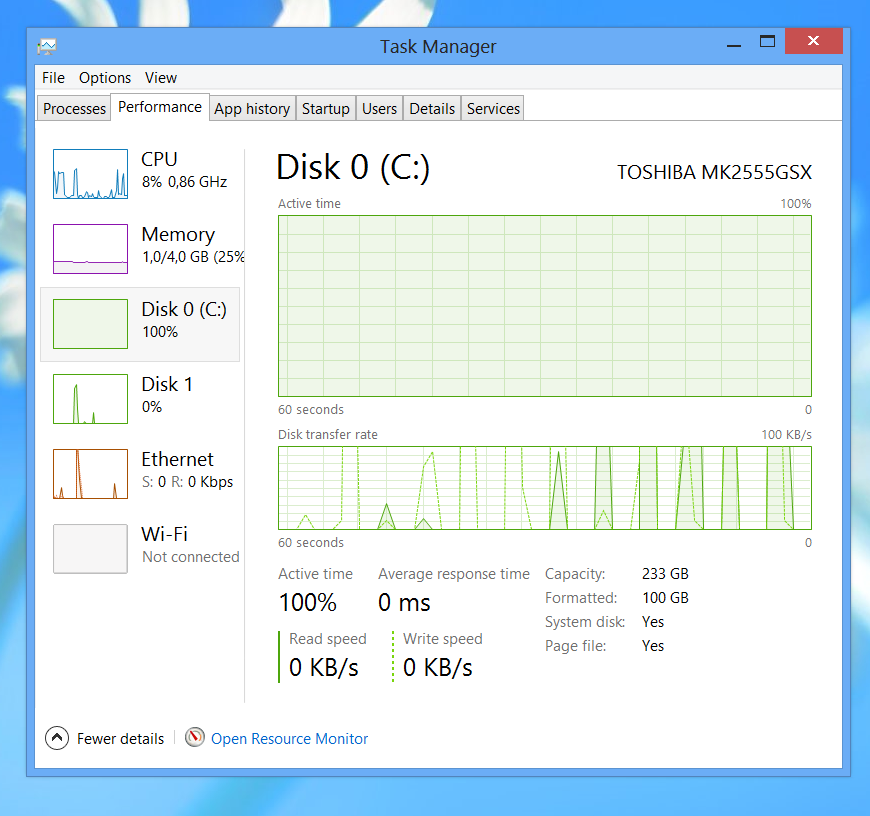 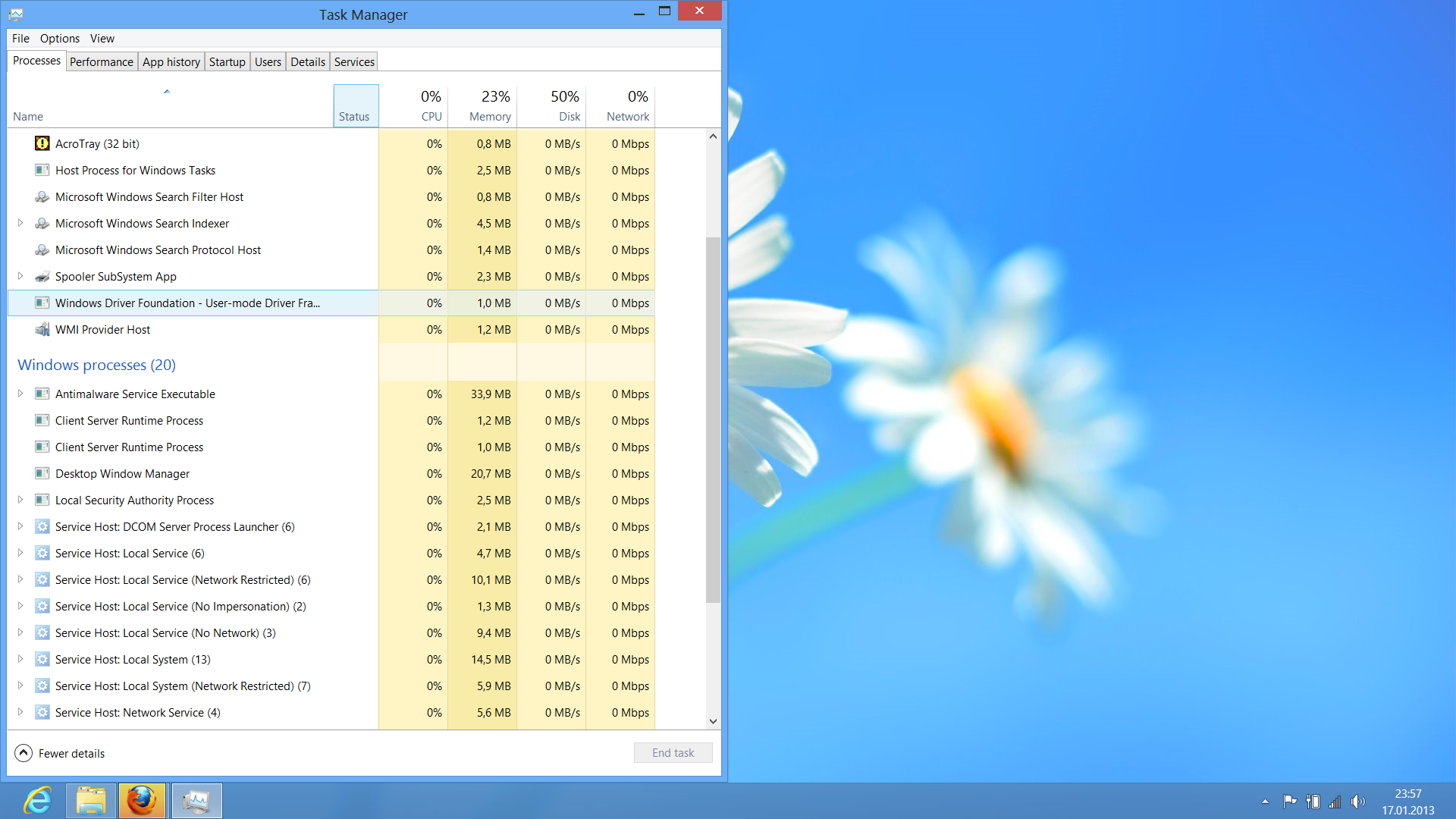 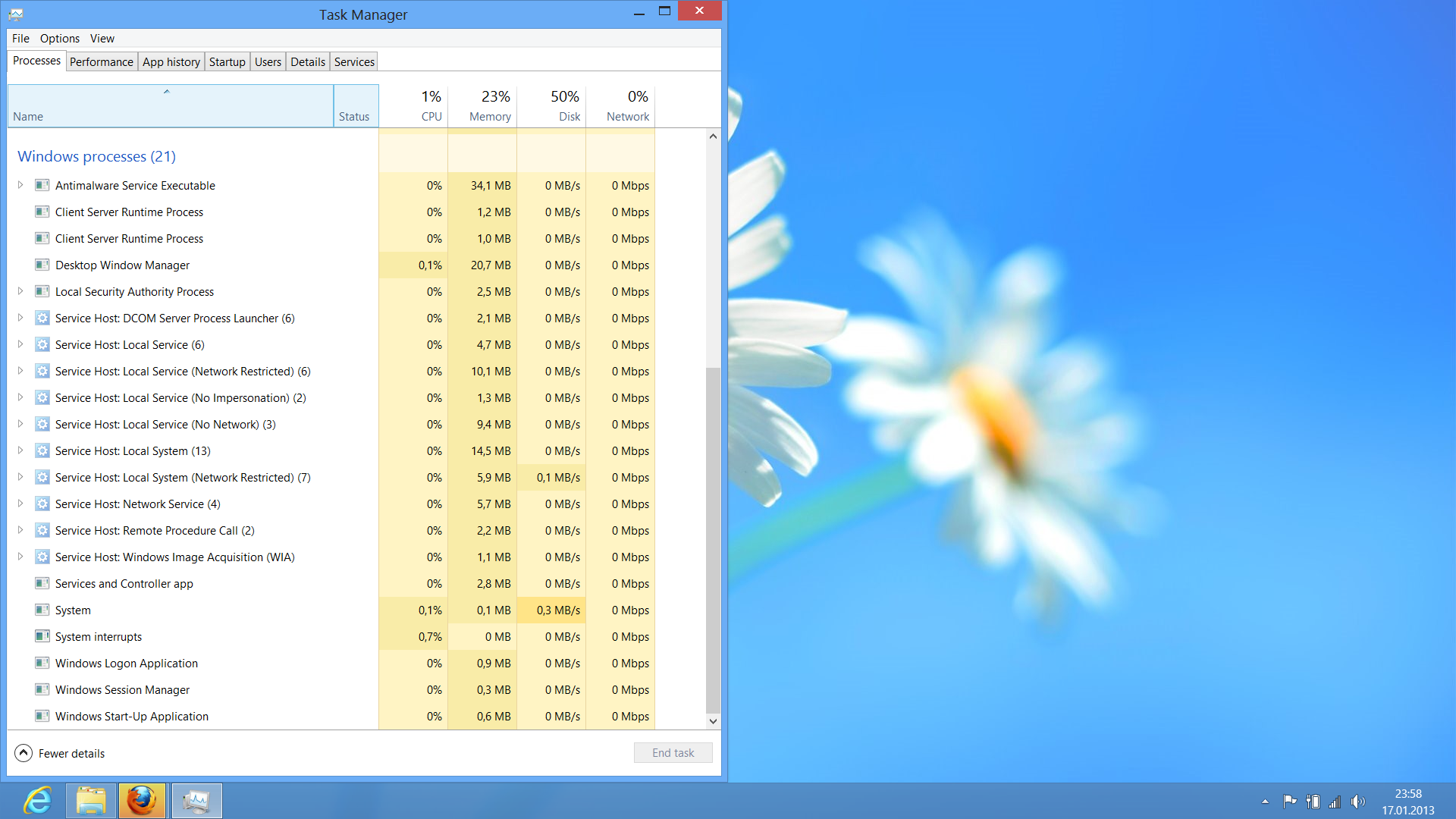 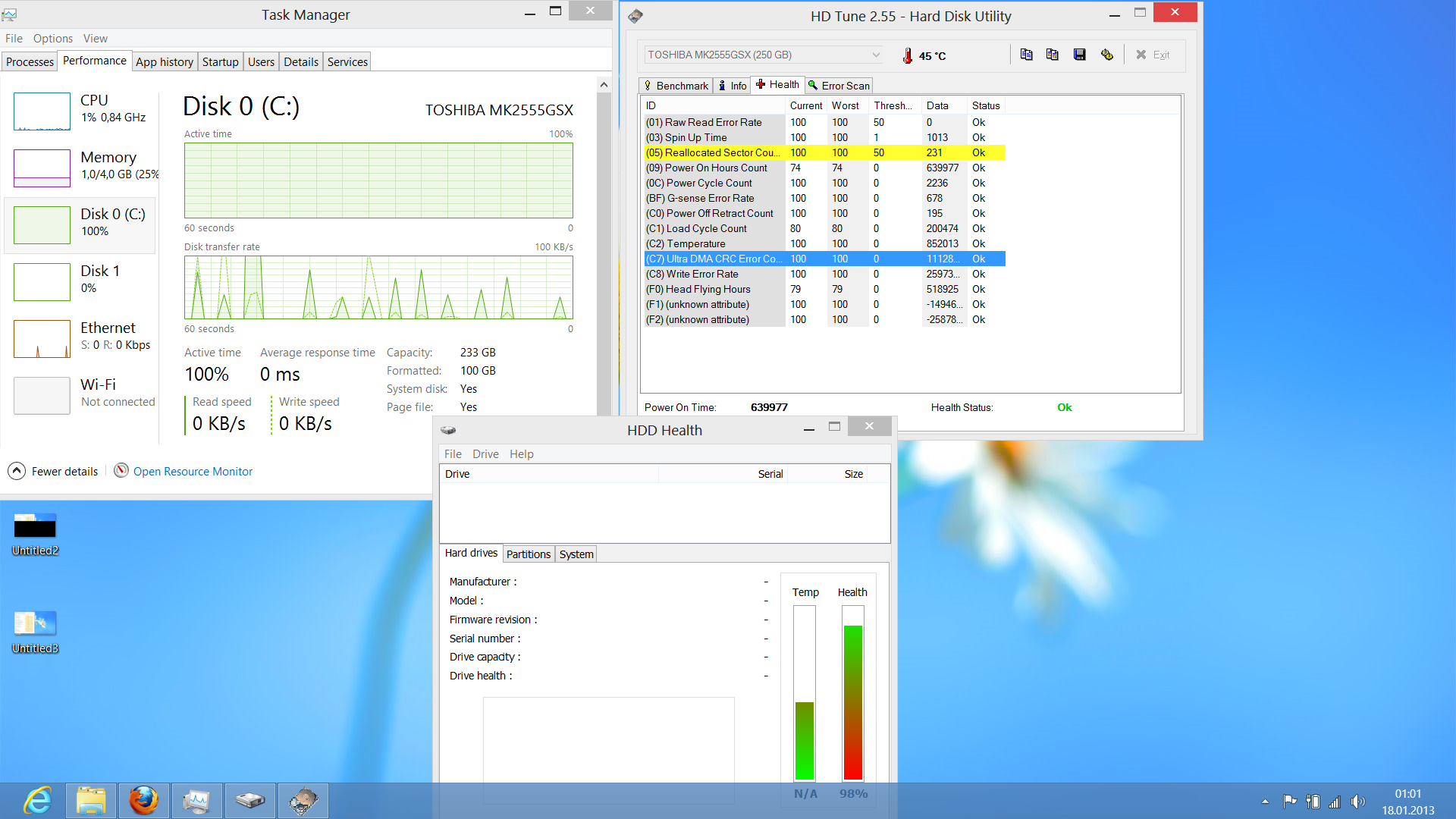 Okay, so I bought a Samsung 840 pro Series 128 (de factor 120)GB and set it in - the laptop works perfectly now. So the hard drive must have been the cause. In case it had not been, I would have plugged the SSD into my desktop anyway.

Thanks for all your ideas.

I would suggest going to the Dell website and downloading all the drivers. Missing drivers can cause problems like that, especially CPU and chipset drivers. The other possibility (as long as you didn't install 64-bit on a 32-bit system), is either the computer isn't compatible with Windows 8, a corrupted download or a bad burn...

If you can find 'services', you can try turning off the indexer as it will run harder on a new install than an old install since it hasn't indexed any files yet, although I think it's more likely one of the above reasons.

Most hard drives start making noises before they completely fail (as long as they aren't SSD drives anyway).

Firstly I think the active 100% is a false alarm because the actual re/write speeds are 0. See this post: Extremely high disk activity without any real usage

Now you mentioned several failed installation attempts, this could most likely be due to a corrupted install disk, did you verify the disk after burning? It could also be due to HDD failures, if so does your HDD have SMART status (in BIOS). If the SMART status is ok then I would start to rule out HDD failure. You could run a full disk check on your HDD (Right click drive in Explorer > Properties > Tools Tab). If the optical disk is dodgy, burn another copy and try installing again.

Windows 8 is search based (you search for apps, files settings etc) and will index your computer post install. I would not recommend you turn this off, instead leave the computer on for a while and let it finish indexing and downloading updates. After which the computer will run noticeably faster.

Finally, you are installing new OS on old hardware. Why do you expect it to run faster? Your hardware manufacturer is most likely not going to be supporting this OS and will not provide new optimized drivers causing windows to use generic drivers for most devices which are not optimized for your hardware.

Not sure if this helps you but I had such a hard time finding a fix for my problem, I wanted to post here:

I had a very similar problem and I believe fixed it today. Now it might not be applicable to you but this is how I fixed my Windows 8 Pro 100% HDD activity.

I installed my Win 8 on a SSD, but in the BIOS on the MOBO I had the Storage Configuration as IDE (I just upgraded the HD to an SSD and installed Win 8 Pro on it clean) instead of AHCI. I loaded Windows 8, and changed the Registry to accept AHCI using this method Link and then restarted Win 8. I went into my MOBOs BIOS and changed the Storage Configuration to AHCI. Restarted Windows and the problem seems to have disappeared. I hope this helps you!

First of all, if you have a legal copy, the first place where you should ask it's at microsoft and/or you laptop/HDD vendor [Toshiba or Dell] support. (that's one of the advantages of having a legal license. Use it. You paid for it. Make those geeks work for you). If there's any driver incompatibility with your HDD model, It's a good practice to report it (either to microsoft or to your HDD vendor) so they can fix it in future patch releases (or maybe they already have a patch for it, saving you money from buying another HDD).

Now, from my experience with windows installations, If you had experienced problems in the installation the odds for future problems are very high. Since your last update, I will go with HDD corrupted sectors (which cannot be repaired, but can be marked to be skipped with proper tools) or driver malfunction. Windows 8 installation (internally speaking) its very different, and if your laptop wasn't designed to work with windows 8, maybe you need a BIOS/UEFI update and/or use a different HDD driver in the installation (even if the installation wizard detects the drive). Thus, that's why you should contact microsoft/laptop/hdd vendor support in first place.

Not the answer you're looking for? Browse other questions tagged hard-drive windows-8 or ask your own question.

-2
How can I solve the 100% disk usage issue in windows 8?
64
Extremely high disk activity without any real usage