I just discovered today that one can create VirtualBox VMDK files that simply reference real partitions on local disks and, needless to say, got pretty excited. "This means I can boot my Windows 7 installation from VirtualBox running in Linux!"

Partition 2 is my EFI boot partition, partition 4 is the Windows msft partition, and partition 5 is the actual NTFS Windows partition. This went off without a hitch, so I chowned the VMDK files to my current user so I can run them with my login user.

This led to the first hitch. I can't seem to add this image to VirtualBox as any user except root, and I'd really like to not run it as root if possible. Is there a workaround?

The next hitch is EFI. I enabled EFI booting in VirtualBox, but whenever I boot the EFI/Microsoft/Boot/bootmgfw.efi image, I see the following code: 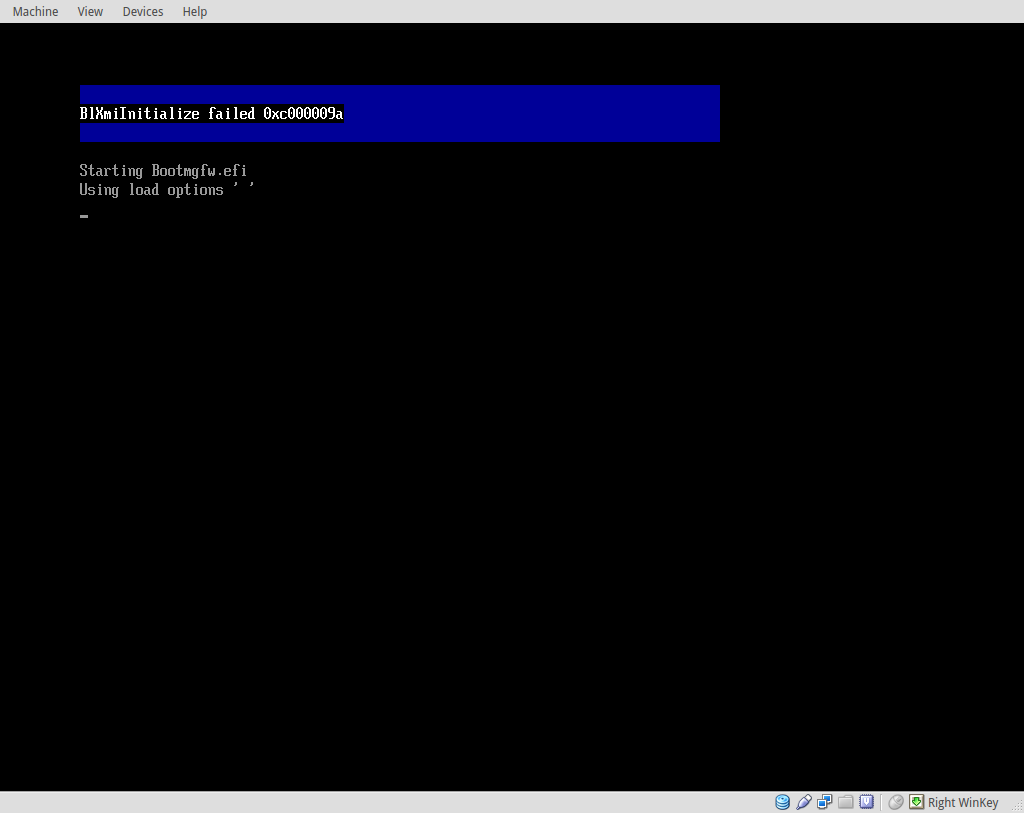 and it doesn't boot. Plus, having to use the actual UEFI shell to get things booting is at best a hassle.

How can I get my actual local Windows 7 installation booting as a non-root user from Linux in VirtualBox?

By adding your Linux user to the disk group, you can use the VMDK drive as a non-root user:

I still can't get past the boot error, though.

I figured it might be because of other problems, so I tried using my Windows 7 installation disk for startup repair, but it doesn't seem to even see the Windows installation, as the disk prompts me to simply install Windows.

In order to resolve potential problems with it missing vital information, I did the following to create a VMDK of the entire disk, not just individual partitions:

The drive /dev/sdb is a virtual drive provided by a hardware Intel RAID card (RS2BL080).

It's pretty lame, but true. Interestingly enough, it'd be arguably more difficult to implement EFI for Mac OSX than for Windows, as basically every modern motherboard has UEFI firmware that "just works™" with Windows, whereas Apple uses their own proprietary EFI implementation designed for their own hardware.

TL;DR: As of the writing of this post, EFI support doesn't really work with Windows in VirtualBox.

Information seems to be very limited regarding windows efi boot error. I can only find 2 links below, which seems be backup of each other, in Russian

It is not addressing VirtualBox Windows EFI boot. However, it demonstrate how to modify Windows Bootmgfw.efi for dual booting with grub-efi. Maybe you can use that technique to inspect the bootmgfw.efi content and pin-point the actual issue.

However, there is no mentioning of using efi. So they maybe using old style bios.

According to this post, Windows may ask for activation every single time switching boot mode(VM vs Native). I think this understandable, as switching between the mode is like switching to a different motherboard and cpu.

14
Is it possible to run a Windows partition as a VM?
11
Booting into a Virtual Machine from a physical installation

3
Cannot run native Ubuntu in virtualbox with a vmdk created using the -partitions specified
0
Share hard drive between OS X (Mountain Lion) host and Windows 7 guest in VirtualBox
7
How can I mount a sdcard and view it in /dev of a virtualbox guest
1
How do I run Debian via VirtualBox using the physical partitions (rawdisk)?
0
virtualbox "could not read from the boot medium" with rawdisk
5
Boot a physical disk with EFI in VirtualBox Ubuntu 18.04 host