Run a batch/cmd upon screensaver

Is there a way to run a .bat or .cmd when the screensaver starts? I've noticed some .exe can run if you rename them to .scr but is that it?

Screen Launcher lets you choose any program to run as a screensaver. You could start a Powerpoint, a movie or any EXE or associated file. To install, simply unzip, right-click and click Install on the context menu. You can then use Screen Launcher just like any other screensaver. To open files such as Powerpoint presentations, you must execute the powerpoint program and type the path to your ppt as a parameter. An example for displaying an image would be c:\winnt\system32\mspaint.exe c:\picture.bmp. Download today to take advantage of any media as a screensaver.

[Alternate download link since official site seems to be dead.]

Screensaver that runs a command. 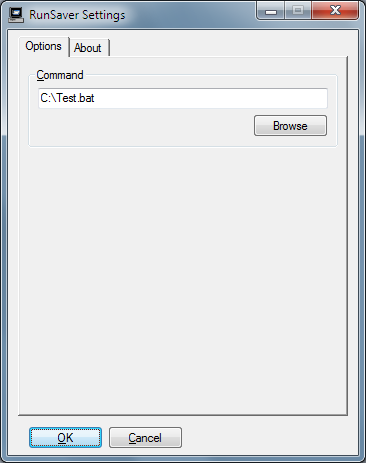 I'm sure there are many more such screensavers that will allow you to launch arbitrary programs/scripts. But what if you'd like to continue using your current screensaver? If so, see below for the solution (tested on Win7, should work fine on Vista+).

In order to complete the nice answer from @Karan, I would like to refer, for those interested in executing a program upon screensaver dismissing, that the process is the same used on his "3. Using no 3rd party tools" solution, but Event ID should be 4803.

If time is not terribly critical, then you could simply use the Task Scheduler's built-in Trigger "Begin the task: On Idle".

Next, go to the "Actions" tab and set the action to whatever it is you want to run.

This should execute the Action after the screensaver starts (or if the system goes idle without the screensaver), but there may be a 0-15 minute delay. Here is the relevant specifics from the Task Scheduler documentation:

So, your screensaver launches, and then 0-15 minutes later windows checks for idle and launches your program.

Not the answer you're looking for? Browse other questions tagged windows batch screensaver or ask your own question.

8
How to start a Windows task on `Workstation Unlock` and add 2 or more triggers?
5
Run an application with/as screensaver
3
Is it possible to retain multi monitor settings when one monitor is "unplugged"?
2
Close firefox if it is inactive or idle?
3
Log screensaver activity
5
Disable ability for specific users to lock computer Windows 10
0
Hook task scheduler trigger into display off/on event

1
How do you change the screensaver without going through the Control Panel (Windows 7)
3
OSX: Is there a way to make an .app file a screensaver?
1
Delay locking Windows 8 when screensaver goes off
6
How can I disable all internet connections while my screensaver is running?
6
Wait for a process to complete in CMD
0
Change time between screensaver-start and screen-lock
0
Prevent cmd window from closing when it's run