I'd like to have a countdown timer in my taskbar on an Ubuntu 12.04 machine with Unity 2D. My use case is primarily time management, for example "countdown from 30 minutes, and I'll take a break when the timer finishes."

I've installed gnome-shell-timer. How do I launch it?

While we're on this topic, here's my survey of Linux timer applications that I've tried recently:

Thanks to this SuperUser thread for introducing me to some of these apps.

Tomate seems to have everything you want, it's fairly simply and focused on pomodoros, but you can choose the lengths of the work and break times, and you can get it to hide into the taskbar: https://launchpad.net/tomate

There is an explanation on how to activate the extension in the source readme file (just scroll down to "Enable the extension using gnome-tweak-tool ..." at https://github.com/olebowle/gnome-shell-timer

Unfortunately, I dont't understand how to use the gsettings in my terminal. Would like to get it to work, too :)

There is also Alarm Clock

The look of the panel: 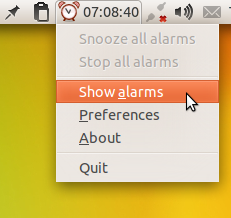 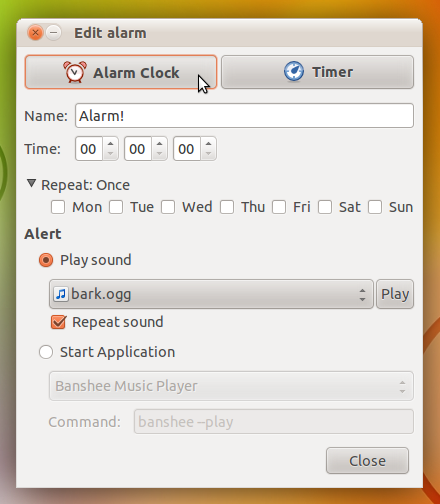 It seems to do everything I need it to.

You probably just need to add the applet to the panel. I am not running gnome at the moment but it should be something like Right Click on the panel => "Add applet to panel" or "Panel properties" or similar.

What about kalarm? It has a high level of customizability, and I think you can show time as a tooltip at least.

I struggled quite a bit with getting it running too. Open the gnome-tweak-tool (run from terminal or use the 'advanced option' through gnome).

Go to Shell Extensions, and click on Timer Extension (don't expect it to be at the bottom).

It will now appear up top in gnome, near the volume controller, hope this will help others struggling to get the program running.

Not the answer you're looking for? Browse other questions tagged linux ubuntu productivity ubuntu-unity timer or ask your own question.

18
How do I restore the Gnome Panel volume control in Ubuntu?
0
Ubuntu 11.10 Virtual-box Unity 3D not working
0
Why is my number of workspaces stuck on 4 (gnome-shell installed into ubuntu 11.10)
4
Cannot change the desktop wallpaper in Ubuntu 14.04
1
Shell aliases when launching programs from within a Desktop environment (Alt+F2) or window manager?
6
Have systemd timer *not* run on boot, only on schedule
1
How to install Unity tweak tool and themes in Ubuntu 20.04?
0
How can I open a kernel shell in GNOME?