HP G62-b50SR, GPU temperature rises up to 90-100 degrees, computer begins to slow down and even shuts down sometimes. I cleaned my laptop many times, replaced thermal compound and silicone pads. When I have bought it - all was working perfactly. Operating systems - Windows 7 and Windows 8. In normal usage state (surfing in browser) the temparature varies between 65-85 degrees.

I have bought my HP G62-b50SR laptop 2 years ago. After one year I began to notice GPU overheating (about 90 degrees) and slow fps in games. I was understanding that I need to clean it. I have disassembled it with help of video tutorial. My laptop supports Switchable graphics technology, so there are 3 chips under cooling system on its motherboard: CPU (AMD Turion II Dual-Core P540), integrated graphics card (ATI Mobility Radeon HD 4250) and more powerful graphics card (ATI Mobility Radeon HD 5470). When I took off cooling system there was thermal compound on CPU and thermal pads on GPUs. But at that time I didn't know what is thermal pad, so I have removed them. Then I realized my mistake and using some post on specialized site I used part of bandage + thermal compound to replace thermal pad. I have replaced old thermal compound from CPU with new one and assembled laptop. After that I didn't play games for one or two months, but then I began to play and the same situation repeated - overheating and slow down. I have already tried to use thick thermal compound layer for GPUs. Nothing helped me. I tried to use new thermal pads and again no effect.

So can anybody help me? 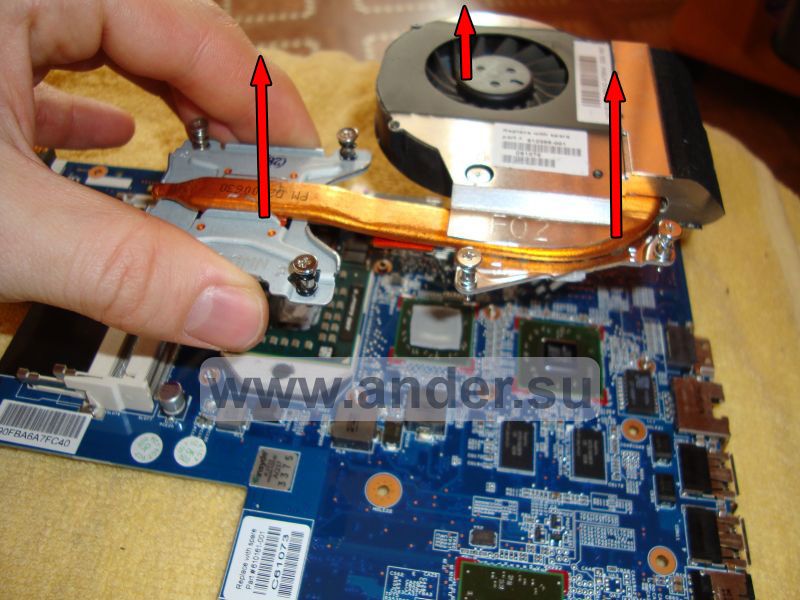 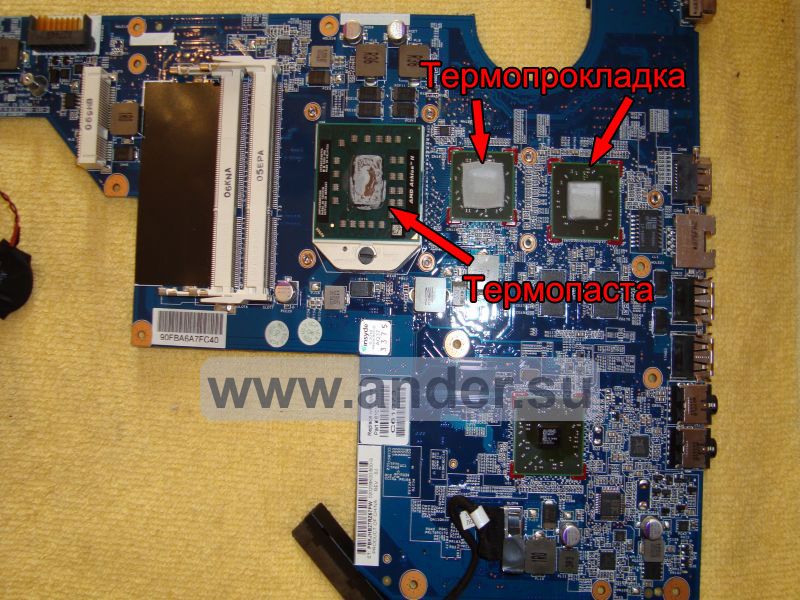 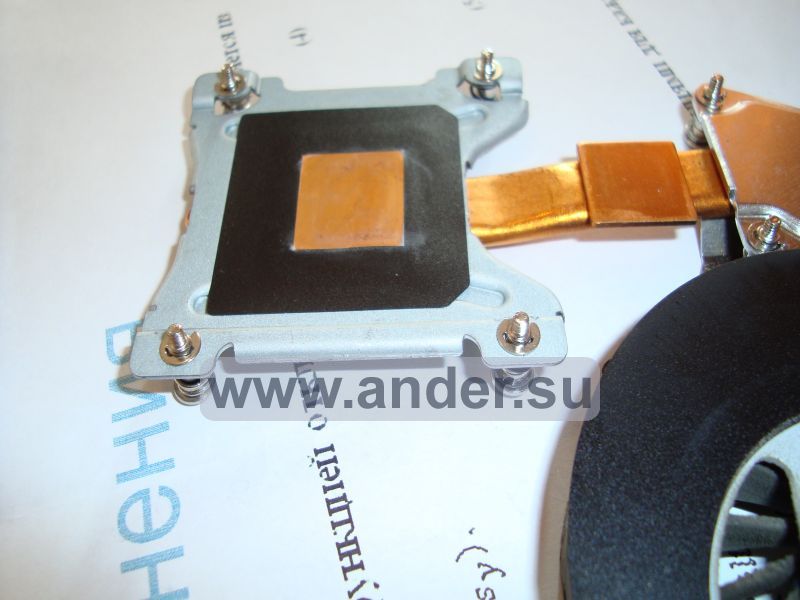 Generally the thermal interface material will not degrade that quickly. looking at the pictures, I think I see dust accumulation on the fan blades. If so then you may have accumulated dust on the leading edge of the heat exchanger. Over time dust and fiber can accumulate between the fan and the heat exchanger creating a "beaver dam" effect that blocks air from flowing through the heat sink. In the top picture, under the large red arrow on the right would be where the beaver dam would be if it is there. You may need to disassemble the fan from the heat pipe assembly to see if this has occured and to remove any blockage. Hope this resolves your problem.

Thermal paste is should be applied in a very thin layer. It is supposed to help the heat-sink make contact with whatever the heat-sink is cooling, not to conduct a lot of heat on it own.

In contrast: A thermal pad is usually a lot thicker.

From your description I gather that you had a thermal pad, threw it away and improvised a 'replacement pad' of the right thickness by combining bandage and thermal compound. This will simply not work as well.

To fix this, either adjust the cooling so you just have a thin layer of paste and solid contact with the heat-sink, or order the correct thermal pad from HP.

"Thermal grease" is not designed to act as a heat conductor, but only to fill up the microscopic gaps between CPU/GPU and thermal sink. It should be applied in a very thin layer.

If the gap between the CPU/GPU and the sink is too great, first check the retaining screws of the thermal assembly to verify they're properly seated. If they are, you will need some copper or silvered-copper "shims" of the appropriate gauge.

If you feel adventurous, or better: really careful, with a firm hand and experience with the stuff, you can improve on the thermal grease by using galinstan instead. Beware: the stuff eats through aluminum and destroys most electronic circuits on simple contact, so you really really want to not have it dripping inside your laptop. A little more than a needlepoint was enough for my XPS M1330's GPU to lose 15 °C - and even so, I somehow managed to drop three almost invisible flyspecks of the stuff on the laptop's chassis. There are three almost invisible holes in the metal now. One drop on the inside is all that it takes to need a new laptop.

My GPU used to overheat from the 60+℃ to 100+℃ within seconds but now everything is stable and nice on approx 50℃ when running something with gfx requirements. I bought the machine for 50€ from a friend who didn't know what to do with it so he bought a new one.

Additional 8€ for the shims and a working laptop is the end result. Thank you for the tips. Worth the work and effort in the end. More copper shims to the people!

Small addition: The temps described above are when using the ATI Radeon GPU. When using the built-in Intel HD GPU all temps are below 30℃! when idle. For my usage of watching movies, using office and playing CM 01/02 and different console emulators the Intel HD GPU is more than enough :)

Not the answer you're looking for? Browse other questions tagged laptop gpu overheating or ask your own question.

2
Disable GPU of Laptop
5
How do I correctly apply thermal paste on a laptop CPU with a small surface area?
0
Adding a GeForce GPU will add up the graphics processing on Gigabyte 880GM?
0
Adding some kind of heat paste when replacing thermal pads GPU and other chips
1
GPU and dedicated running at the same time, how to disable?