I just had a visitor to my apartment requesting some internet access.

Since the visitor was on a untrusted device (school computer) I decided to put it on a dedicated ssid.

Support for multiple ssid and vlan gives a cozy feeling of isolation of the untrusted device.

While setting it up though I also realized there is a 'Priority' setting, a value between 0-7 I can assign a specific ssid. As I've never used QoS I don't understand what that value is.

This is the setting: 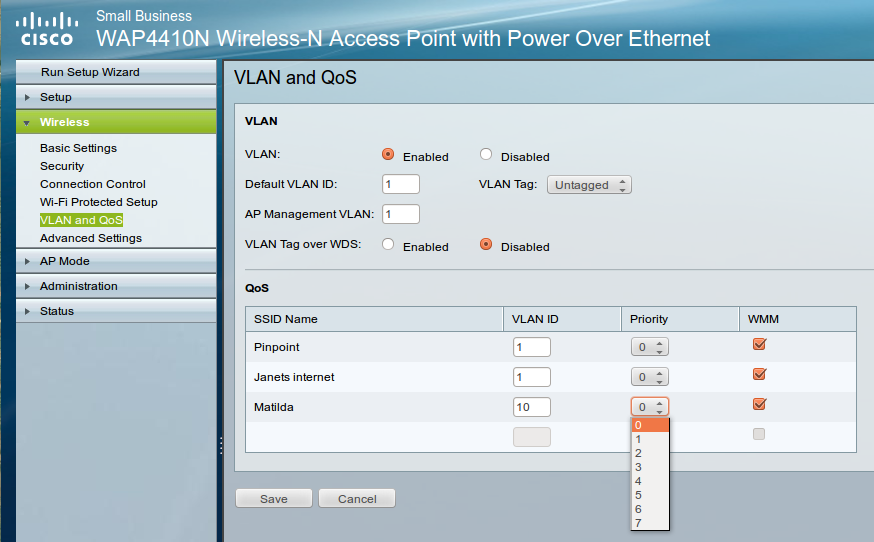 Is it just a tag assigned to the packets on a particular ssid which my router (not the access point, but my internet facing router) can use to sort the traffic?

Or is it a value the access point uses to decide which ssid is more important when scheduling its processing power?

Since I'm not using QoS on any other part of my network I'd ideally like to set lower priority on the guest ssid so that my guests can utilize whatever bandwidth is available but always have lower priority than my other ssid's/devices.

QoS can be rather a complicated topic, luckily this one has a simple answer. While the documentation is rather straight forward, I can't say how this will impact your actual experience. For one thing, most QoS doesn't impact anything unless the utilization is high, so if you don't have much load on the device, it probably won't make any difference.

From page 40 of the admin guide for this device (http://www.cisco.com/en/US/docs/wireless/access_point/csbap/wap4410n/administration/guide/WAP4410N_Admin_Guide.pdf):

The Quality of Service (QoS) feature allows you to specify priorities for different types of traffic. Lower priority traffic is slowed to allow greater throughput or less delay for high priority traffic.

Priority—Select a priority from the list. The higher the number, the device assigns it a higher priority. For example, if setting up multiple networks you can issue a guest network a low number and a private network a higher number.

Not the answer you're looking for? Browse other questions tagged wireless-networking qos or ask your own question.

5
How to set up multiple SSIDs with bandwidth limiting on a single wireless router?
3
no internet access on guest SSID on netgear WNR2000 router
0
One Access point two SSIDs = seperate Networks?
1
Is it possible to allow clients of the same VLAN to see each other even if they connect to different SSIDs with the same name?
1
Access Point - Should it have the same SSID?
0
No Internet access to guest SSID with dedicated 802.1Q VLAN
2
Correct way to configure multiple routers in rental apartments for privacy / usability