Sound only from the right speaker

I'm using S/PDIF and I only get sound from the right speaker plus the subwoofer. 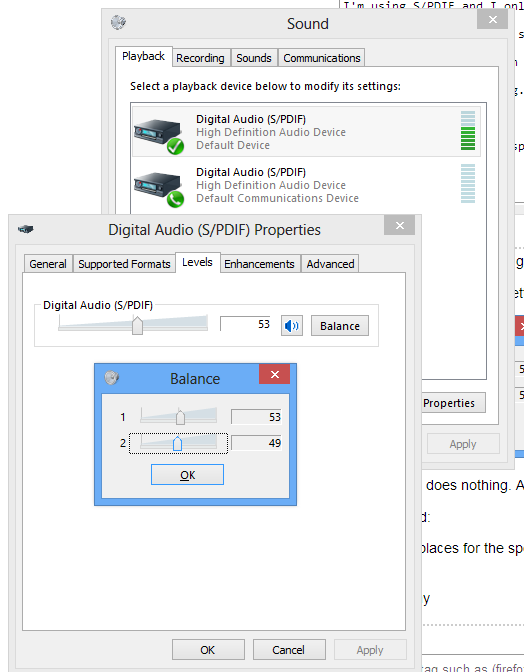 Adjusting #1 does nothing. Adjusting #2 affects the right speaker.

Same thing. Only audio from the right speaker. So I'm quite certain that it's not a speaker problem but how windows sends the audio (or sound card problem).

Are there a Windows 8 setting which configures the soundcard to send audio as 5.1 or similar?

I've bought a new sound card (Asus Xonar D2X). Almost the same thing. Now I only get sound from the left headphone.

If I connect my head phones to a 3,5mm soundcard jack I get stereo. 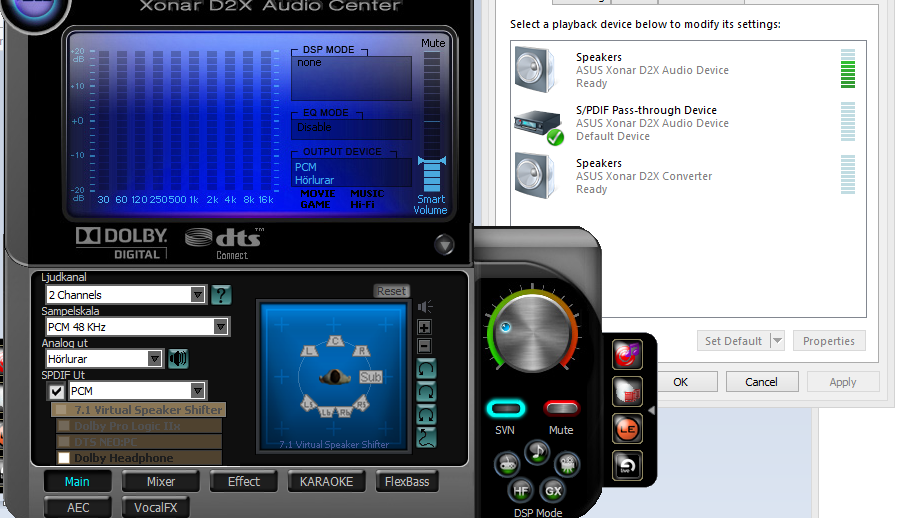 I've now tried with a "regular" cable from the computer to the speakers. I've made sure that a 2 speaker system is selected. Still no sound from the left speaker.

I've also had the same problem in Windows 7 and Windows 8.

Hence the only thing left is the mother board, right? But before I accept an answer how could the motherboard affect the sound in such way?

Ubuntu and Fedora gives me the same errors when I try to boot them (burned a live CD for both):

So that makes it a bit hard to try the sound using Linux.

I tried the new speakers with my laptop and got the same result. So I tried my old speakers with the laptop and both works (seems like one of the speaker cords were loose, I had to wiggle it. I blame my son for that ;)).

The new speakers have red/white connector. And I tried to switch them resulting in the same speaker only getting sound. So the computer seems to send stereo all right.

Next test was to switch the speaker cables on from the bass unit. Then the sound shifted to the other speaker. So it seems like the hardware in the bass or the speaker connector is broke?

So all of this just seems like a circumstantial mess :( First that the old left speaker got played around with by my son (resulting in me buying new speakers which didn't work either). And then a new soundcard. Guess I'll go and return the new speakers then.

Heh. I still get problems. Everything have now been switched and I find it hard to believe that my third pair of speakers are broken too.

Root cause : The cable for the LHS speaker is broken. It might have broken at either of the ends.

Try connecting your speaker to another audio output - ipod etc. If it does not work, then this diagnosis is right.

There is a setting that changes the output format of the audio. It is my suspicion that the left channel of your audio is being routed to your subwoofer. Windows may not be autodetecting your speaker configuration properly and might be sending a stereo signal to your speakers incorrectly.

Try right-clicking the sound device and clicking Configure Speakers, instead of double-clicking to get to Properties.

A configuration wizard should appear, starting at the "Speaker Setup" step. It should let you change the output format of the sound. Choose the one corresponding to your setup. For instance, this is what I see when I do it on my laptop: 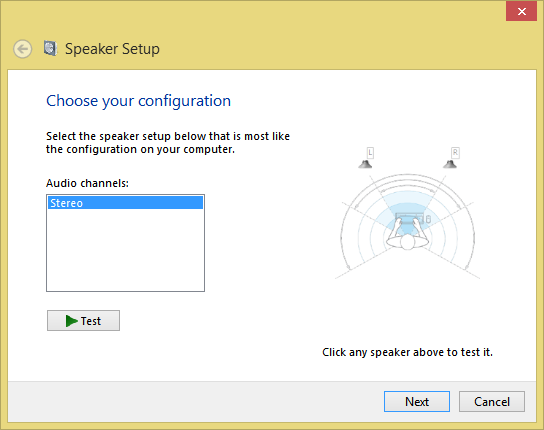 Also, make sure that you are hooking up your cables properly behind your computer! I have a 5.1 audio system hooked up to my computer at home, myself. My motherboard supports up to 7.1 surround, and so not all of the audio output ports are hooked up. Make sure the color-coding on the speaker cables and your back panel connectors match. In my case, the orange and pink-labeled inputs are very similar and, if you aren't careful, can be easily mixed up.

Have you tried disabling the mobo soundcard from BIOS and running strictly off of your PCIe one?

Are you getting full range sound from your subwoofer instead of only low frequencies? Can you hear voice and system sounds, or is it playing correctly?

Since your getting stereo from the 3.5mm jacks, sound is being processed correctly into analog, which is actually one degree further than using the SPDIF which is full digital.

Have you tried changing your SPDIF output mode?

What model of edifier speakers are you using?

It's almost definitely the jack on the back of your computer that the speakers are plugged into or the motherboard itself (either drivers/hardware/bios). I have a 5.1 system that has had similar problems and I narrowed it down to the motherboard jacks. You can certainly try jiggling them but your ultimate solution is probably to get a nice sound card.

Depending on where/how the volume knob extension is hooked up, it is probably consistent with what I am saying. ie, if the volume knob comes from the right speaker which works, the knob's jack would need to be able to receive full stereo through it and that's why you get full stereo with your headphones.

For any playback device, you can go into the sound properties and configure it to be a range of things but it is often limited by what it's detected capability is.

Also, given that your stereo 2.1 set up probably has 1 main audio plug that goes into the back of the computer, switching how the individual speakers are hooked up changes nothing about how the motherboard is transmitting the audio signal. ie, still will only send to the same speaker it has its connection with.

Wiggling the rear jack and pulling it out a little bit will help troubleshoot this while playing a stereo music file.

It could, alternatively, be the connection point on the back of your 2.1 sound system from your computer where your sound system receives the signal transmitted from the motherboard.

It is still likely the S/PDIF port on your motherboard or how the motherboard handles the S/PDIF interface in general (ie, a sound card using S/PDIF would still need to go through the motherboard). The audio jack on the front of your PC is interfaced differently so it is not relevant.

The only thing to try in that case is to try it out on a different motherboard. (I had a motherboard from asus where the audio chip crapped out and wouldn't play standard 3.5mm audio correctly - I was effectively getting mono all the time instead of stereo).

Also, try your sound card on another motherboard to rule that out.

If it is not the actual connection jack on the motherboard, it may have to do with your OS but that's not as likely as it being the motherboard at this point.

It would be good to try a free Linux platform like Ubuntu nevertheless.

All audio getting processed goes through the motherboard regardless of where/how its connected. It is the key juncture and if you rule out everything else around it, the motherboard itself must be what is wrong.

You may have some luck tweaking bios settings or updating the motherboard bios but if that doesn't work, I'd just go grab a drop in motherboard from a different manufacturer that fits your current spec.

I had the same problem (Windows 7 x64) sound on the right speaker only. Here is the solution:

After searching for a solution for a long long time, now I can not believe it was such an easy one...

You had this problem with 2 different sound cards and 2 different speakers so it seems it is because of OS or motherboard.

MS changed how your PC is shut down in windows-8, in other words it is just like hibernation now. Therefore when you face with hardware related problem, you have to use restart since shutting down will not solve it.

Note that older Windows had problem with restarting such as when you have a problem with a driver, it may exist after resetting but shutting down since it was not like hibernation.

As a result, firstly restart your PC. When you see booting screen, which says press F1 or other keys for entering boot up setting, press turn off button on your PC. Then wait about 30 seconds and turn on your PC.

If your problem still exist and everything is ok in the device manager, your motherboard could be the problem.

If only one speaker works in Win 8.1:

click the speaker icon select Advanced tab select 16bit,44100HZ(CD Quality) - This is the only option worked for me click the Test button to test.

I had this exact same issue, I ended up replacing the audio cables and its now working through both speakers. I had S/PDIF out from my tv to an optic to phono adaptor and one of the phono cables had broken.

I had a "kind-of similar" issue with my 5.1 system under Windows 10. The motherboard card is a Realtek god-knows-whatever, and I have an extra Creative Fatal1ty PCI-E.

I reinstalled Windows and get everything working out of the box. Installed the specific drivers from Creative, no problem. Installed Realtek drivers and... I lost the sound from every speaker but the front ones! Even though they are not connected to the Realtek card.

My advice, if you have a Realtek driver installed, uninstall it, reboot and try again.

Not the answer you're looking for? Browse other questions tagged windows-8 speakers or ask your own question.

57
How do I swap audio output of the left and right speakers?
0
No sound from subwoofer but 'test' sounds work
0
Linux ALSA: No sound out from internal speaker
2
Left channel sound comes out of desktop speaker and right channel sound comes out of laptop speaker
2
Horrible noise coming from right speaker
0
Why both my speaker only work when plugged directly into laptop?