Not sure what this DVI-like port on my PC is

I have a re-manufactured HP Compaq dc7700p Small Form Factor running Windows XP (for some reason inside the Windows Vista Boot Manager, instead of the WinXP NTLDR).

On the back of my PC, I have what looks like a DVI Port, and that's what I thought it was. When I bought a DVI to VGA Cable (to connect a second screen), it wouldn't fit. I took a look and found that the DVI connector was different to the port on my PC. I would love to post some pictures, but being a new user, I can't.

What I want to know is what port this actually is, so that I can find a suitable converter.

The only difference between this and DVI is at the end with the 4 square pins and the +-shaped pin. The + pin is still there, but instead of the 4 dots, I have two flat lines underneath the squares (above the +), which are of the length of 2 of the squares.

Just so you know, a DVI to VGA cable will not work without the two pins above and two pins below the "bar" or "plus"; that is what carries the analog signal

Looks like DVI-D to me too. Maybe this cable is what you're looking for.

It seems that your PC has a DVI output. Please notice that the DVI standard has different plugs, depending on the type of data that is sent through the cable (it could be both digital or analog). Refer to Wikipedia to see which port your PC has.

It's likely DVI-I vs DVI-D.

Take a look at this super user question that shows both (granted, a different question with similar answers).

Looks like it's DVI-I as was suggested by others. Check out http://www.playtool.com/pages/dvicompat/dvi.html 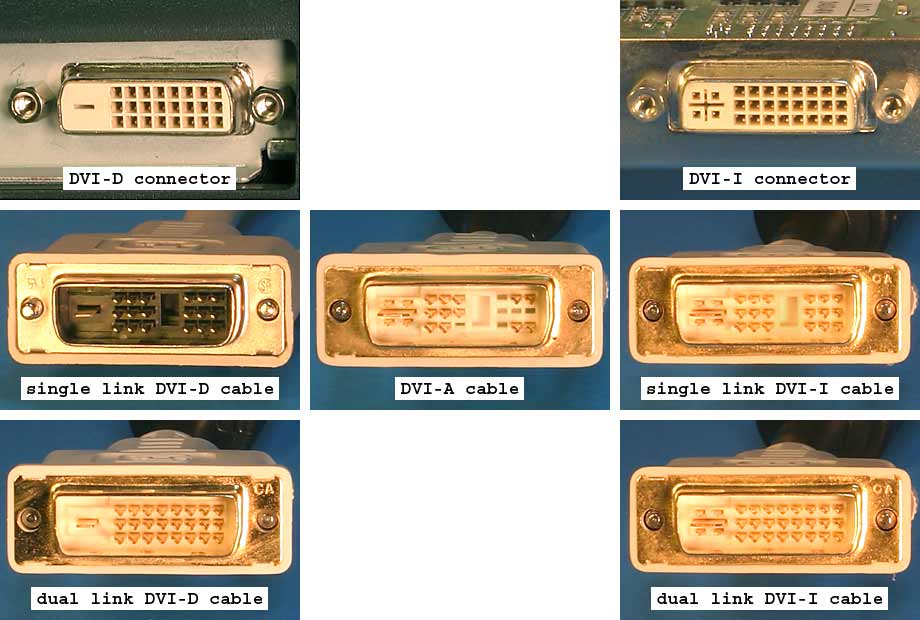 Not the answer you're looking for? Browse other questions tagged dvi connector compaq-desktop-computer or ask your own question.

18
DVI-D vs. DVI-I: Is the digital video quality any different?

4
Why does Windows 7 recognize my second monitor yet the second monitor remains blank?
1
Samsung 42 plasma HDMI DVI PRoblems
6
How can I get my dual monitors to work in Windows 7, after no online solutions work?
0
Could a graphics card port fault result in brightness/contrast differences?
0
3 Monitor display on a AMD A8-6600k
0
What is this port, 15x4, missing (13,4), possibly video
1
Need help identifying some cable connectors and their use case
0
DVI-D single link not working in DVI to VGA adapter for monitor