Can someone tell me what that Last BIOS time is on the upper right corner of the task manager on Windows 8 Pro? Mine has always been 0.0. I guess it is not measuring the BIOS time properly so what can I do to fix that? I own the Samsung NP700Z5C-S04US FYI.

Here's a snapshot of my task manager: 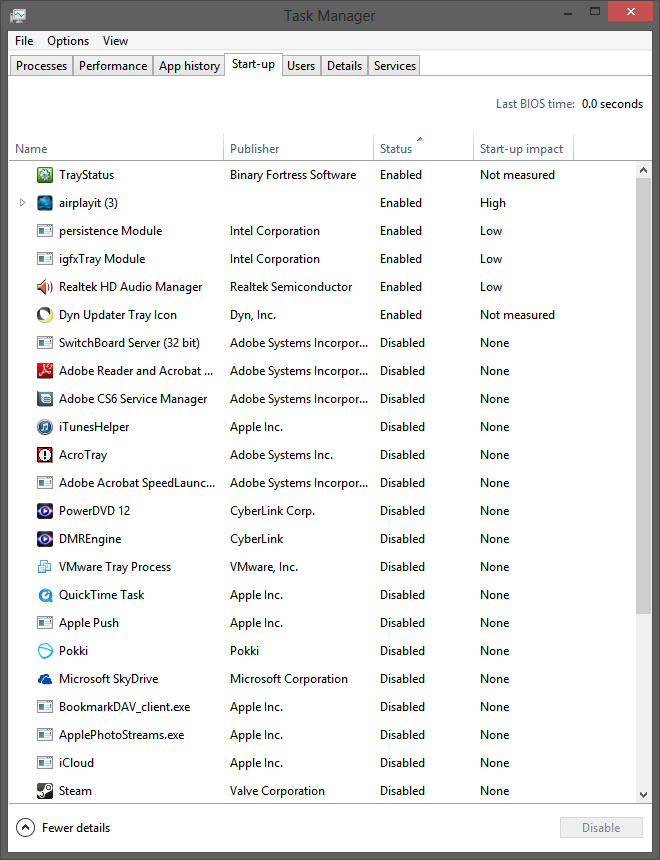 Very interesting question indeed! I spent quite some time looking around, and here's what I found so far:

Although I'm not sure why you are getting it displayed as 0.0 seconds, the purpose of the "Last BIOS time" is to tell you how long it took to load the BIOS, it is the amount of time between pressing the power button, and seeing the screen that indicates that windows is loading.

Just in case anyone stumbles on this question, this is indeed a built-in part of Task Manager. The string is in Taskmgr.exe.mui and can be seen with the following PowerShell command:

this is indeed an OS feature present in windows 8 by default. i have seen it in several Laptops.

From what i make of it, and its a personal observation from having worked across so many different laptop brands and models, its actually the time the computer takes to boot once the BIOS recognizes the win 8 OS to the time you get the welcome screen.

I just noticed it on my M17x-R4 with a clean install of Windows 8 Pro. Mine says 52.9 seconds right now-don't know what that means, as it sure takes less time to boot than that!

I did but an aftermarket Crucial M4 SSD in my system, but I do NOT have any expresscache stuff installed, nor any drivers at all for it. Very few system specific drivers that weren't built in to Windows (basically just Dell/Alienware's software to enable some of the function keys, plus Creative Lab's drivers, plus Nvidia's drivers).

I would assume it's an OS feature.

You need a UEFI BIOS with windows 8 installed on a GPT partitioned drive to get it to work.

Also, if your VGA card's BIOS is GOP enabled you can enable "Ultra fast boot" or "hardware fast boot."

There is conflicting information online but I will stick to the latest one.

So, here's the usual boot process:

"Last BIOS time" supposedly measures how long it takes for the hardware to initialize (i.e. POST) before booting Windows. For some, it may be 0.0 because their specific BIOS/UEFI firmware does not take note of the time it takes to POST. Another reason would be that their PC has a sort of "Fast Startup" feature where the PC completely skips POST and directly boots Windows, as the case is for me.

The BIOS time is the time taken before the first beginning screen shown after pressing the power button.

This is the total time you have to press the button (whether it be a function button e.g.f2, esc or del) to help access the BIOS.

The BIOS is a part of the computer outside of the operating system which can show you the 'real life' components of the pc. This can be useful to perform tests on the components themselves and see their properties before the OS has even booted up or shown an image on the screen. It can be accessed by pressing a button as soon as you press the power button.

If Secure Boot isn't enabled but your Windows is UEFI and has a GPT Windows partition this will always show 0.0 as the timer only works with Fast Boot, and Fast Boot is forcibly disabled without Secure Boot(for security reasons)

According to a Microsoft MVP, It's the amount of time in seconds between the end of the BIOS screen (windows logo comes up) and the lock screen showing up. 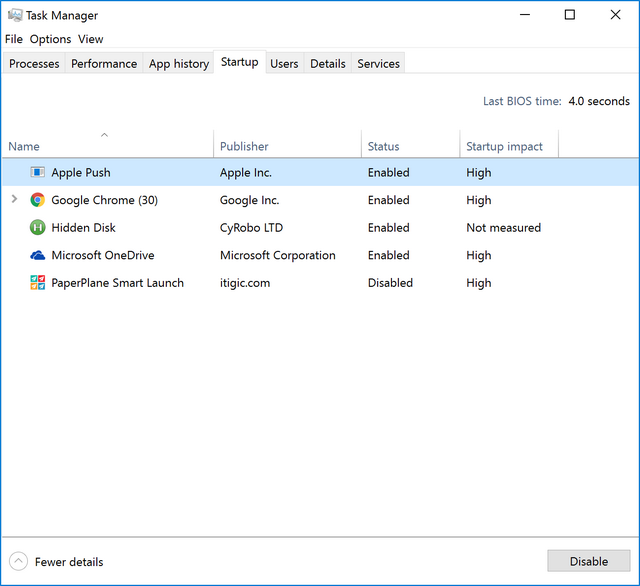 Not the answer you're looking for? Browse other questions tagged windows-8 bios task-manager or ask your own question.

1
How to get 'Last BIOS time' from CLI