I'm really appreciating conemu as an alternative windows shell, but the alert bell sound is driving me crazy! (I wear earbuds and that sound goes right through me..)

Is there are an option to disable the bell alert noise (or switch for a screen flash or something)?

There is "Suppress bells" option. 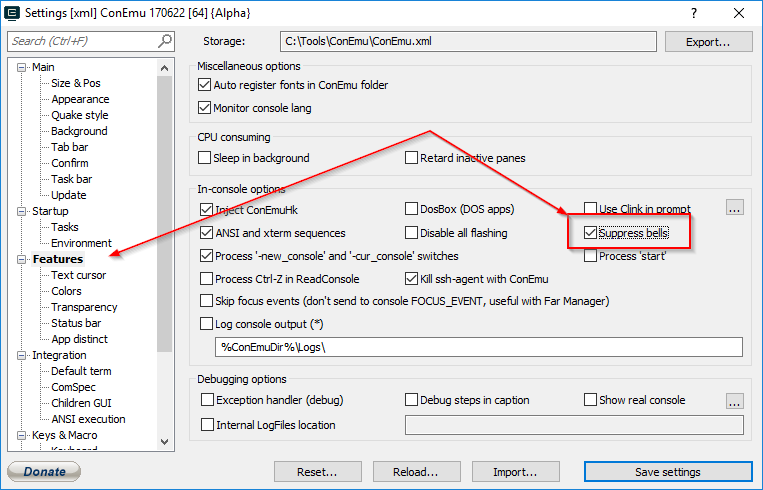 It's caused by the terminal, not ConEmu. For example, it doesn't happen in a local terminal in msys (= Git Bash), cmd, or Cygwin (for me). It happens when you ssh into a remote machine (or VM). To fix in Bash you just need to run this command:

To always turn off the bell in the future, place this command on a line in a file called .inputrc. I think it will also work in .bashrc. You can do this via your text editor of choice or on the command line with:

Of course, you'll need to do this whenever you get to a new machine that does this. You can turn it off globally in /etc/inputrc. You can also set the bell style to 'visible' instead of 'none' to make the terminal flash.

There are other ways to turn off the bell in other shells and programs: http://www.tldp.org/HOWTO/Visual-Bell-8.html

A simple solution is to go to the Volume Mixer and set the volume for "Console Window Host" to 0. This will prevent any console from making any sounds at all. But in practice the only sound it makes is that horrible bell and this will silence it.

In Windows 7+ this sound is played by the Bell driver. In Windows 10 at least, you can change the sound it makes by using the Sound control panel to alter the noise it makes for the Critical Stop event. I found Windows Ding was a better choice for ConEmu, no idea what other apps might play that sound.

The bell-style option is already in .inputrc, but commented out. Unfortunately uncommenting it doesn't resole the issue for me.

The only resolution that works in my case is setting no sound for Default beep. I know it's global but this is better than nothing... 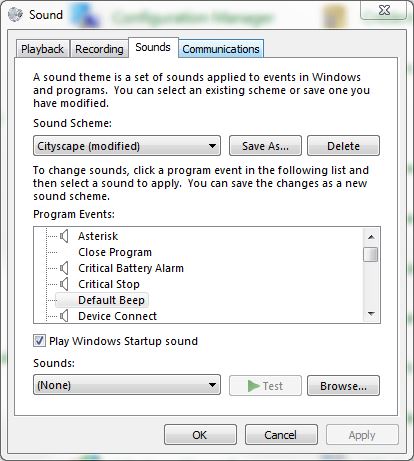 This is not a ConEmu specific solution, but you can disable the Windows system bell if you don't mind never being bothered by this at all. As one of the answers there suggests, you can find "Beep" under "Non-Plug and Play Drivers" in the Device Manager and disable it on the Driver tab under "Startup" (Note: you will need to "Show hidden devices" under the "View" menu to be able to see the "Non-Plug and Play Drivers" section). 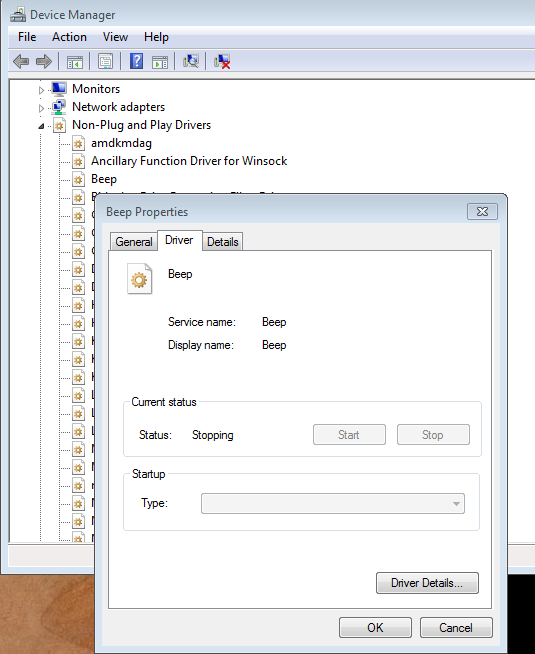 None of the above worked for me so I created a short silent .wav file, put it in c:\Windows\Media and used that as the sound for Critical Stop

13
How to turn off all the beep sounds?
1
Make the sounds (e.g. beep) that PowerShell usually makes