In windows 7, when you right click a file and press r it opens the file's properties window.

With my new windows 8 (en-GB) install, the keyboard accelerator has changed to o. This is inconvenient for me, as almost every file ever is going to have "Open" listed as the first thing in the context menu with, you guessed it, o as the accelerator. So now neither of these options can be selected with one key press.

Is there any way to change the properties accelerator back to r?

I've included some screenshots from 2 different computers (the first one installed only 3 days ago and not touched since). The only difference i can think is that on the very first screen in the Win 8 installer, I chose (actually, it might have been the only option) british english as the "display language" since I am in australia.

In the screenshots, the keyboard accelerators show as the underlined letters in the menu. Pressing the underlined letter will activate that menu choice - unless there are 2 with the same accelerator (in which case it only highlights them and a further key press alternates between them). To show the underlines, go to Control Panel -> Ease of Access -> Change how your keyboard works -> Underline keyboard shortcuts and access keys. 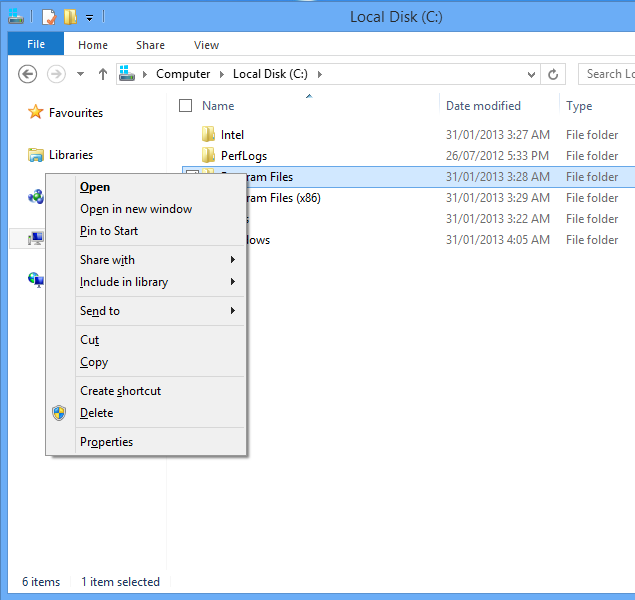 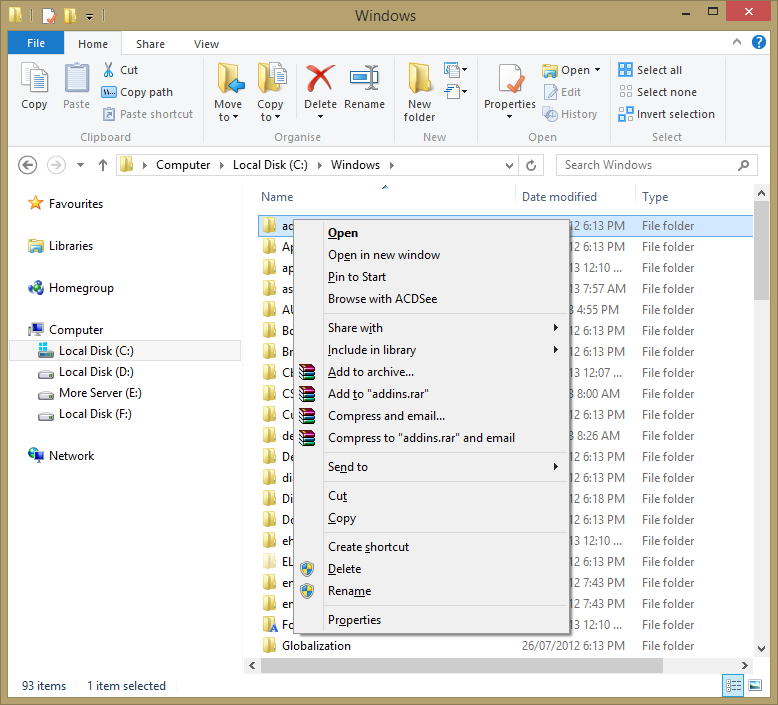 Update: Microsoft keep making this harder to do with each successive update to Windows 10. You may need to go into an offline Command Prompt to replace that file (e.g. the Safe Mode Command Prompt – to get here, click Start, then hold Shift and click Restart. If you need more help finding it from there, then look online). It helps if you have put the edited system32.dll.mui somewhere easy to access.

It is possible to fix this... but not without being being prepared to go about it in an unusual manner and get your hands a little dirty with a hex editor.

Basically, the issue is that some idiot lovely person at Microsoft thought that no one using en-GB (which includes other variants - such as myself with New Zealand English) would care that they broke the accelerator keyboard shortcut. Again, I'm left wondering why software companies don't realise that a lot of the world actually want to use real English, not US-English. For that matter, they don't seem to believe in using keyboards either, what with the creative ways they use to hide accelerator underlines. Anyway, fixing involves only changing two characters. In a protected file hidden under System32, frequently accessed by the OS. :-)

Microsoft handle languages in Windows using "MUI" files (for Multilingual User Interface), basically files matched against whatever program or DLL they are for, which can be easily swapped out with a new language when needed, without requiring a change to the binary executables. The files are named with an additional ".mui" appended to the original file's name (example below). It's elegant in theory, but being Microsoft they made the language pack files non-human readable, because... reasons? Not like a human would ever want to be able to edit a language pack file, surely. :-/

Go to C:\Windows\System32\en-GB, and open up the file shell32.dll.mui in a hex editor. You will need a hex editor for two reasons: one, many text editors will alter the file in some way you are not expecting, and that will kill a binary file; and two, the text in the file appears as character+null, not just character. Look for P.r.&.o. (dots are nulls) and replace it with P.&.r.o. (basically, swap the positions of & and r – or, move the & one character earlier). Because we are not changing the length of the file at all, it doesn't break it.

Now comes the annoying bit: you will probably need to save that file somewhere other than it's original folder, as you need to be running elevated privileges to access the folder, and even then, Windows doesn't like these files being overwritten (I suspect it may be that explorer is trying to access the file as you attempt to write to it).

So, what worked for me was: save the file somewhere, give it a different name (I just added ".n" for New), save it back into that folder, rename the original to something different (I added ".o" for Original), and name your new file shell32.dll.mui in place of the original.

Et voilá, I now have the proper "Properties" shortcut back!

I'd log it with Microsoft as a bug, except that earlier today I removed the Windows Feedback app as part of my trying to get rid of annoying things in Windows... :-)

One last point: this may very well get broken again by updates from Microsoft. I would say to keep the edited file on hand, but it would probably be safer just to re-apply the edit, in case something else gets changed in that file. If anyone wants a copy (saving you the hex edit step), let me know and I will try to find somewhere to share it.

I have officially spent more time on this than I will ever save from it, so hopefully it is useful to someone else! :-)

The shortcut / accelerator appears to be related to your Windows display language setting.

I managed to fix this by:

I still think it's a terribly silly idea to have the same keyboard shortcut/accelerator for properties and open (which are going to be present in the menu of almost every file) in any language.

In my clean Windows 8 install (virtual, but it shouldn't make difference), r works exactly as expected.
Edit: Hmm, that's weird. Mine has the underline in the normal place, as I'm sure the other SU users have it. Maybe it's your language setting, I'm not sure.

In any case, Alt+Enter is a much easier way of opening the properties menu, in my opinion (no mouse movement).

Not the answer you're looking for? Browse other questions tagged windows-8 keyboard-shortcuts windows-explorer context-menu keyboard-navigation or ask your own question.

0
Keyboard shortcut in context menu in Windows 10 isn't default?
0
In windows, why does the hotkey for “properties” on the context menu vary?

1
How to use Windows key in Ubuntu 9.10 to open Gnome Panel menu?
3
Can I define Alt key menu keyboard shortcuts for bookmarks in Firefox 3.6?
4
Very slow context menu in Windows 8
1
Lotus Notes 8.5 and 9: On Workspace, menu not accessible with Alt+[char], but Alt followed by [char] works
1
Change Name/Description in windows context menu
0
Access Firefox tabs (underlined) keyboard shortcuts
0
Alt+` (tilde or back tick) switch windows like alt-tab in Windows 10